‘I Just Can’t Stand By’: American Veterans Join the Fight in Ukraine 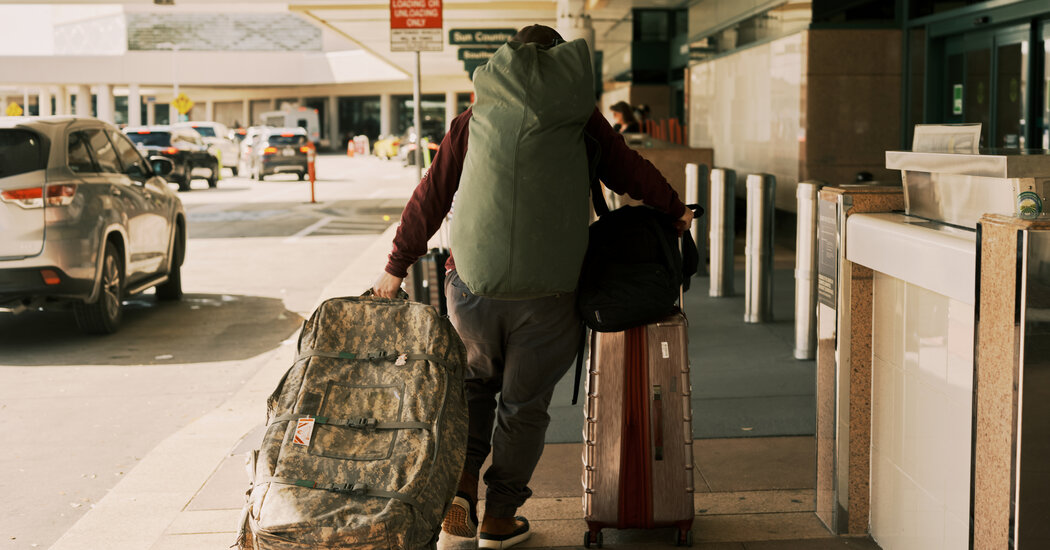 Hector served two violent tours in Iraq as a United States Marine, then got out, got a pension and a civilian job, and thought he was done with military service. But on Friday, he boarded a plane for one more deployment, this time as a volunteer in Ukraine. He checked in several bags filled with rifle scopes, helmets and body armor donated by other veterans.

“Sanctions can help, but sanctions can’t help right now, and people need help right now,” said the former Marine, who lives in Tampa Bay, Fla., and like other veterans interviewed for this article asked that only his first name be used for security reasons. “I can help right now.”

He is one of a surge of American veterans who say they are now preparing to join the fight in Ukraine, emboldened by the invitation of the country’s president, Volodymyr Zelensky, who earlier this week announced he was creating an “international legion” and asked volunteers from around the world to help defend his nation against Russia.

Ukraine’s minister of foreign affairs, Dmytro Kuleba, echoed the call for fighters, saying on Twitter, “Together we defeated Hitler, and we will defeat Putin, too.”

Hector said he hoped to train Ukrainians in his expertise: armored vehicles and heavy weapons.

“A lot of veterans, we have a calling to serve, and we trained our whole career for this kind of war,” he said. “Sitting by and doing nothing? I had to do that when Afghanistan fell apart, and it weighed heavily on me. I had to act.”

All across the United States, small groups of military veterans are gathering, planning and getting passports in order. After years of serving in smoldering occupations, trying to spread democracy in places that had only a tepid interest in it, many are hungry for what they see as a righteous fight to defend freedom against an autocratic aggressor with a conventional and target-rich army.

“It’s a conflict that has a clear good and bad side, and maybe that stands apart from other recent conflicts,” said David Ribardo, a former Army officer who now owns a property management business in Allentown, Pa. “A lot of us are watching what is happening and just want to grab a rifle and go over there.”

After the invasion, he saw veterans flooding social media eager to join the fight. Unable to go because of commitments here, he has spent the past week acting as a sort of middle man for a group called Volunteers for Ukraine, identifying veterans and other volunteers with useful skills and connecting them with donors who buy gear and airline tickets.

“It was very quickly overwhelming, almost too many people wanted to help,” he said. In the past week, he said he has worked to sift those with valuable combat or medical skills from people he described as “combat tourists, who don’t have the correct experience and would not be an asset.”

He said his group has also had to comb out a number of extremists.

Fund-raising sites such as GoFundMe have rules against collecting money for armed conflict, so Mr. Ribardo said his group and others have been careful to avoid specifically directing anyone to get involved in the fighting. Rather, he said, he simply connects those he has vetted with people who want to donate plane tickets and nonlethal supplies, describing his role as being “a Tinder for veterans and donors.”

A number of mainstream media outlets, including Military Times and Time, have published step-by-step guides on joining the military in Ukraine. The Ukrainian government instructed interested volunteers to contact its consulates this week.

Several veterans who contacted the consulates this week said they were still waiting for a response, and believed staff members were overwhelmed.

On Thursday, Mr. Zelensky claimed in a video on Telegram that 16,000 volunteers had joined the international brigade, though it is unclear what the true number is. The New York Times was not able to identify any veterans actively fighting in Ukraine.

The outpouring of support is driven, veterans said, by past experiences. Some want to try to recapture the intense clarity and purpose they felt in war, which is often missing in modern suburban life. Others want a chance to make amends for failed missions in Iraq and Afghanistan, and see the fight to defend a democracy against a totalitarian invader as the reason they joined the military.

To an extent not seen in past conflicts, the impulse to join has been fueled partly by an increasingly connected world. Americans watching real-time video in Ukraine can, with a click, connect to like-minded volunteers around the globe. A veteran in Phoenix can find a donor in London with unused airline miles, a driver in Warsaw offering a free ride to the border and a local to stay with in Ukraine.

Of course, war is rarely as straightforward as the deeply felt idealism that drives people to enlist. And volunteers risk not only their own lives, but also drawing the United States into a direct conflict with Russia.

“War is an unpredictable animal, and once you let it out, no one — no one — knows what will happen,” said Daniel Gade, who lost a leg in Iraq before going on to teach leadership for several years at the U.S. Military Academy at West Point and retiring as a lieutenant colonel. He said he understood the urge to fight but said the risk of escalation resulting in nuclear war was too great.

“I just feel heartsick,” he said. “War is terrible and the innocent always suffer most.”

The risk of unintended escalation has led the U.S. federal government to try to keep citizens from becoming freelance fighters, not just in this conflict, but for centuries. In 1793, President Washington issued a Proclamation of Neutrality warning Americans to stay out of the French Revolution. But the efforts have been uneven, and often swayed by the larger national sentiment. So over the generations a steady stream of idealists, romantics, mercenaries and filibusters have taken up arms, — riding with Pancho Villa in Mexico, ferrying arms to Cuba, battling communists in Africa and even trying to establish new slave states in Central America.

The civil war in Spain just before the start of World War II is the best-known example. More than 3,000 Americans joined what became know as the Lincoln-Washington Battalion, to fight with the elected leftist government against fascist forces.

At the time, the United States wanted to avoid war with Europe, and stayed neutral, but the Young Communist League rented billboards to recruit fighters, and members of the establishment held fund-raisers to send young men overseas.

That effort, now often romanticized as a valiant prelude to the fight against the Nazis, ended badly. The poorly trained and equipped brigades made a disastrous assault of a fortified ridge in 1937 and three-quarters of the men were killed or wounded. Others faced near starvation in captivity. Their leader, a former math professor who was the inspiration for the protagonist in Ernest Hemingway’s novel “For Whom the Bell Tolls” was later captured and most likely executed.

On Thursday, the Russian Defense Ministry spokesman, Igor Konashenkov, told the Russian News Agency that foreign fighters would not be considered soldiers, but mercenaries, and would not be protected under humanitarian rules regarding the treatment of prisoners of war.

“At best, they can expect to be prosecuted as criminals,” Mr. Konashenkov said. “We are urging all foreign citizens who may have plans to go and fight for Kyiv’s nationalist regime to think a dozen times before getting on the way.”

Despite the risks — both individual and strategic — the United States government has so far been measured in its warnings. Asked during a news conference this week what he would tell Americans who want to fight in Ukraine, Secretary of State Antony J. Blinken pointed to official statements, first issued weeks ago, imploring U.S. citizens in the country to depart immediately.

He said: “For those who want to help Ukraine and help its people, there are many ways to do that, including by supporting and helping the many NGOs that are working to provide humanitarian assistance; providing resources themselves to groups that are trying to help Ukraine by being advocates for Ukraine and for peaceful resolution to this crisis that was created by Russia.”

That has not dissuaded a number of veterans who are all too familiar with the risks of combat.

James was a medic who first saw combat when he replaced another medic killed in fighting in Iraq in 2006. He did two more tours, in Iraq and Afghanistan, seeing so much blood and death that 10 years after leaving the military he still attends therapy at a veteran’s hospital.

But this week, as he watched Russian forces shell cities across Ukraine, he decided that he had to try to go there to help.

“Combat has a cost, that’s for sure; you think you can come back from war the same, but you can’t,” James said in a phone interview from his home in Dallas, where he said he was waiting to hear back from Ukrainian officials. “But I feel obligated. It’s the innocent people being attacked — the kids. It’s the kids, man. I just can’t stand by.”

Chase, a graduate student in Virginia, said that he volunteered to fight the Islamic State in Syria in 2019 and felt the same urgency for Ukraine, but he warned against simply going to the border without a plan.

In Syria, he said he knew well-meaning volunteers who were detained for weeks by local Kurdish authorities because they arrived unannounced. He arranged with Kurdish defense forces before arriving in Syria. There he spent months as a humble foot soldier with little pay and only basic rations.

Tactically, as an inexperienced grunt, he said, he was of little value. But to the people of northeastern Syria, he was a powerful symbol that the world was with them.

“I was a sign to them that the world was watching and they mattered,” he said.

A few months into his time in Syria, he was shot in the leg, and eventually returned to the United States. He came home and worked for a septic tank company, then got a job writing about used cars. When he saw explosions hitting Ukraine this week, the part of him that went to war three years ago reawakened.

“Everything here is just kind of empty and it doesn’t seem like I’m doing anything important,” he said in an interview from an extended-stay hotel in Virginia where he is living. “So I am trying to go. I don’t think I have a choice. You have to draw the line.”