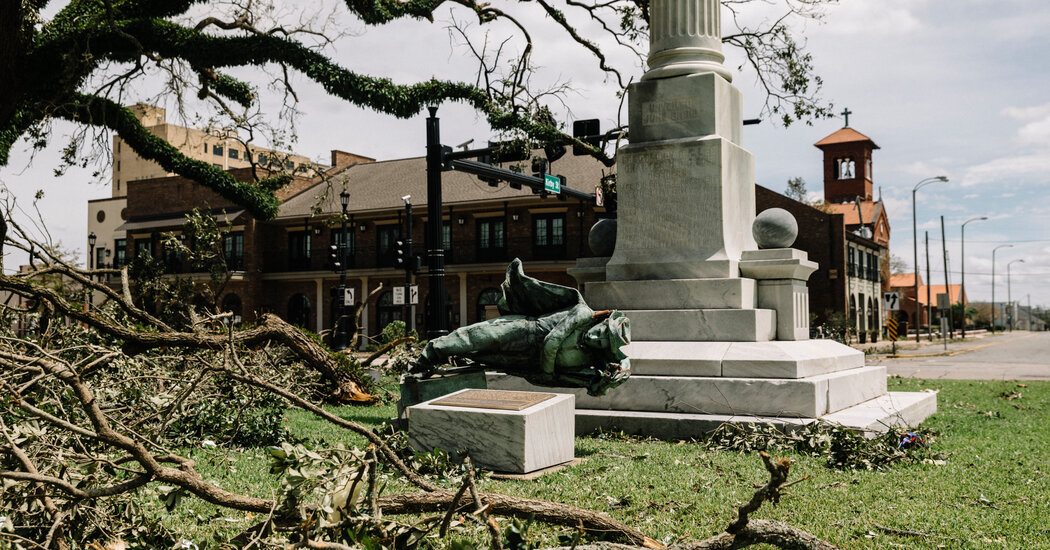 As protests against police violence and white supremacy swept away dozens of longstanding memorials to the Confederacy this summer, a 105-year-old monument on the courthouse lawn in Lake Charles, La., remained standing.

Until Hurricane Laura tore the statue atop it down.

“It is a blessing, a small blessing, in a very devastating situation,” said Davante Lewis, who grew up in Lake Charles and supported the monument’s removal.

The debate over what to do about the South’s Defenders Memorial Monument, which depicted a Confederate soldier on a marble pedestal, had been the “hottest thing in the city” in recent months, Mr. Lewis said on Thursday, until residents turned their attention to preparing for one of the strongest hurricanes ever to hit the region.

The monument was the object of anger and protests after the killing of George Floyd, a Black man, by the police in Minneapolis. The political decision over its fate largely broke down along racial lines, although Lake Charles’s mayor, Nic Hunter, a Republican who is white, had expressed support for removing it.

But two weeks ago, the Calcasieu Parish Police Jury, an elected body that acts like a county board of commissioners and has jurisdiction over the courthouse property, voted 10 to 5 at a special meeting to keep it.

The jury members received 945 written responses from the public in support of the monument, according to The Lafayette Daily Advertiser, and 67 that wanted it gone.

“I view it as military, and it’s just the way I was brought up, to show respect to any statues or monuments,” said Ashton Richard, a police jury member who is white and voted to keep the memorial.

After the vote, protesters said the fight was not over; they started an economic boycott of any business or church affiliated with the jury members who had voted in the monument’s favor.

“If the city would have done what many of us asked it to do, that statue could be in a museum, it could be well kept together and not be damaged,” Mr. Lewis said. “But unfortunately, they took other opportunities to keep it in the bright light of day, and Mother Nature had another plan.”

Hurricane Laura’s powerful winds — tied for the strongest ever to strike Louisiana — appeared to have ripped the bronze statue of the soldier from its pedestal and left it lying next to the base of the monument on Thursday morning among a pile of broken tree limbs.

Officials said they did not know what will happen to it now.

“Today is about making sure everyone is safe and secure,” said Mike Smith, a police jury member who voted for removal.

Mr. Smith is one of four Black men, along with Mr. Lewis’s father, Eddie Lewis Jr., on the 15-member police jury. It represents all of Calcasieu Parish, whose residents are 68 percent white and 24 percent Black. But Lake Charles’s population is about 50 percent African-American.

The vote on whether to remove the statue split mostly along racial lines, with just one white member voting to remove it.

“You have older white men making these decisions,” said Cary Chavis, a Black man and former teacher who helped lead the protests. “When we go in front of the police jury and say, ‘We want this done,’ they don’t have to do this because they don’t look like us.”

The statue has come down several times before — including in a 1918 storm, just three years after it was erected — but has always been restored. In 1995 it was blown off and repaired, despite protests from some local residents, including a district judge, who turned their backs as the soldier was returned to the pedestal.

Mr. Chavis said he hoped that would not be the case this time around.

“That’s what I’m hoping for — that as we put Lake Charles back together,” he said, “we put it back together not with images of systemic racism or white supremacy on public grounds.”