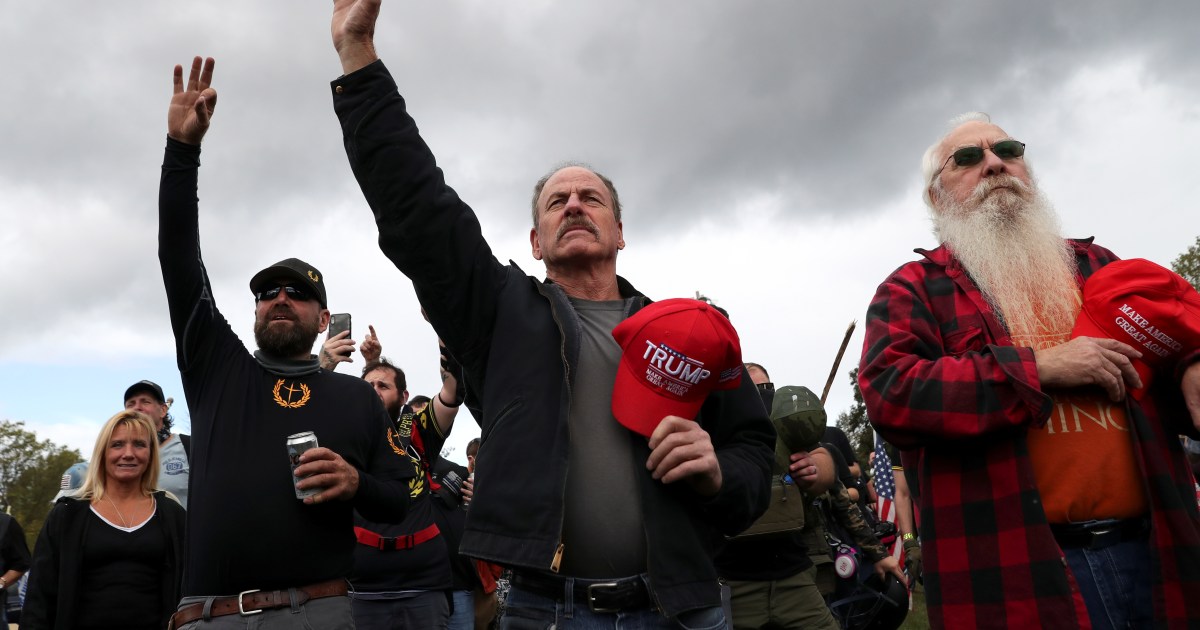 Hundreds of supporters of the far-right Proud Boys group have begun to descend on Portland, Oregon on Saturday, as police prepare for clashes in a city that has become the epicentre of continuing racial justice protests that have at times devolved into deadly violence.

The state’s governor, Kate Brown, declared a weekend state of emergency for the city, saying Friday that “white supremacist groups” were travelling from out of state to attend an event the Proud Boys say was organised to “end domestic terrorism”.

Under the emergency declaration, a state and local law enforcement task force is authorised to use “proportional force”, including tear gas, to keep the peace. The city’s mayor had previously banned the use of tear gas by Portland police.

As of noon, several hundred members of the loosely affiliated far-right group had gathered in Delta Park, with many carrying guns, knives, batons, baseball bats, and magazine clips, according to the Oregonian news website. Many wore clothes supportive of US President Donald Trump.

Two small counter demonstrations had formed nearby, but organisers of those gatherings told the Oregonian that they had no plans to interact with the Proud Boys rally.

While video on social media showed members of the Proud Boys confronting people accused of being associated with Antifa, an anti-fascist movement, no clashes were immediately reported.

Local and state leaders had decried the planned rally on Saturday, saying in a letter to the community that many participants aligned with the Proud Boys have openly discussed tactical operations and military-style formations and planned to cause chaos and violence.

“The event poses a physical danger to Portland residents, as clearly shown by the organisers’ long track record of assaults, confrontations, and threats against elected officials and the citizenry of Portland,” the letter said.

“We clearly state, once again, that law enforcement do not want or need any help from paramilitaries or vigilante groups.”

Portland has become a magnet for right-wing counter-protesters following four months of anti-fascist and Black Lives Matter demonstrations against police violence and racism, initially sparked by the police-involved death of George Floyd, an unarmed Black man, in Minnesota in May.

Clashes between left- and right-wing groups have escalated across the United States since mid-August.

The most recent incident involved a self-declared anti-fascist fatally shooting a right-wing Patriot Prayer member in Portland on August 29. Four days earlier, a vigilante armed with a semiautomatic weapon killed two protesters and wounded another in Kenosha, Wisconsin.

Trump, who has made “law and order” a principal theme of his re-election bid, has singled out Portland as one of several Democratic-led cities he says are “anarchist jurisdictions” that should have their federal funding cut.

The men-only Proud Boys group describes itself as a fraternal organisation that is “anti-racism” and “anti-political correctness”.