Hubble Telescope Zooms In on the Biggest Comet Ever Spotted 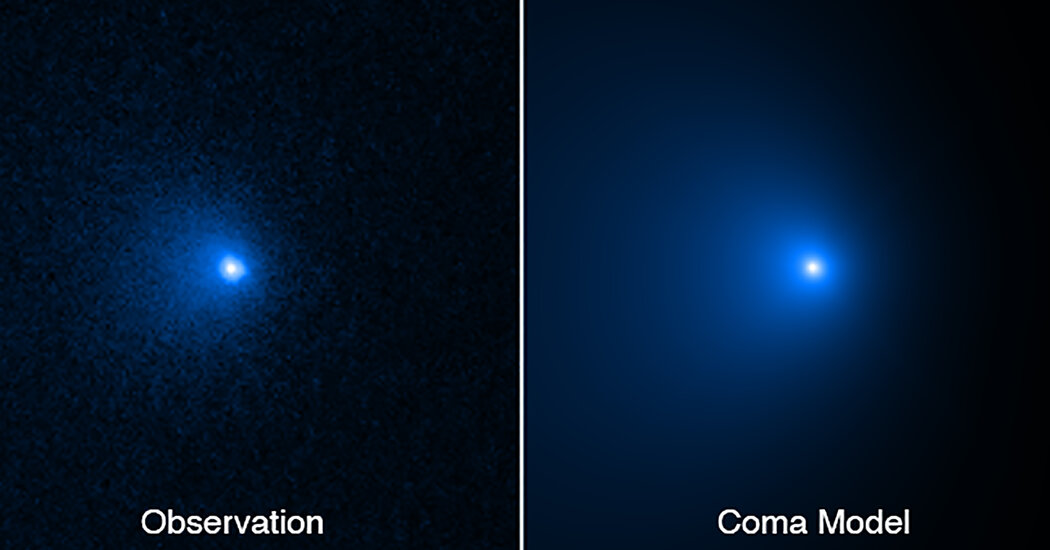 Last year, scientists announced that they had discovered a colossal comet lingering just inside Neptune’s orbit. They estimated its icy core to be between 62 and 125 miles long, based on its brightness. If the estimates were accurate, this would be the largest comet ever discovered.

But scientists wanted to be certain that the superlative stuck, so in January they pointed the Hubble Space Telescope at the comet and measured its nucleus with precision. As reported this week in The Astrophysical Journal Letters, the comet’s core could be up to 85 miles across, making it more than twice the width of the state of Rhode Island. It also has a mass of 500 trillion tons, equivalent to roughly 2,800 Mount Everests.

“It’s 100 times bigger than the typical comets we’ve been studying for all these years,” said David Jewitt, an astronomer and planetary scientist at the University of California, Los Angeles, and an author of the new study.

Despite its impressive dimensions, this comet — named C/2014 UN271 (Bernardinelli-Bernstein) after its two discoverers — will be visible to the naked eye for only a brief time. It is barreling toward the sun at 22,000 miles per hour. But at its closest approach, in 2031, it will get only within a billion miles of the sun — just behind Saturn’s orbit — where it will appear as a faint glow in the night sky before boomeranging back out into the shadows.

With the help of Hubble, however, astronomers can see and study this effervescing extraterrestrial visitor in all its glory, almost as if they were flying right beside it — a spectral haze of blue enveloping a seemingly bright, white heart. “The image that they have is beautiful,” said the comet’s co-discoverer Pedro Bernardinelli, an astrophysicist at the University of Washington who was not involved in the study.

Despite its heft, measuring the size of this comet’s nucleus proved difficult. Although far from the sun, just a trickle of sunlight is sufficient to vaporize the nucleus’s volatile carbon monoxide ices, creating an obfuscating dusty atmosphere known as a coma.

Hubble could not clearly see the comet nucleus through that haze. But by taking such high-resolution images of the comet with the space telescope, Dr. Jewitt and his colleagues were able to make a computer model of the coma, allowing them to digitally remove it from the images. With only the nucleus remaining, sizing it up was a breeze.

Their analysis also revealed that its icy nucleus is blacker than coal. This may partly result from being “cooked by cosmic rays,” Dr. Jewitt said. High-energy cosmic rays have been bombarding the nucleus, breaking the chemical bonds on its surface. That allowed some of the lighter elements, like hydrogen, to escape into space, leaving behind dark-hued carbon — making the nucleus a bit like a severely burned slice of toast.

This dark nucleus suggests that this comet — its supersize notwithstanding — is not too dissimilar to others. “Comet nuclei are pretty much always superdark,” said Teddy Kareta, a planetary scientist at the Lowell Observatory in Flagstaff, Ariz., who was not involved with the study. He suggests comparing comets to piles of roadside snow. “Even though it’s still mostly ice, just adding a bit of dirt and grime can make a pile of snow just look nasty and dark.”

More of the comet’s secrets will be revealed as it approaches Saturn’s orbit. But in 2031, as it begins the return leg of its three-million-year circuit of the sun, astronomers will not know much more about its provenance, likely in the Oort cloud — a hypothetical and currently unobservable bubble around the solar system filled with primitive icy shards of varying shapes and sizes.

C/2014 UN271 is a welcome sneak preview of what hides within that bubble. But “finding this thing is a reminder of how little we know about the outer solar system,” Dr. Jewitt said. “There’s a vast quantity of objects out there that we haven’t seen, and a huge number of things we haven’t even imagined.”

He added, “Who knows what the hell is going on out there.”