How Those Bogus Reports on ‘Ineffective’ Neck Gaiters Got Started 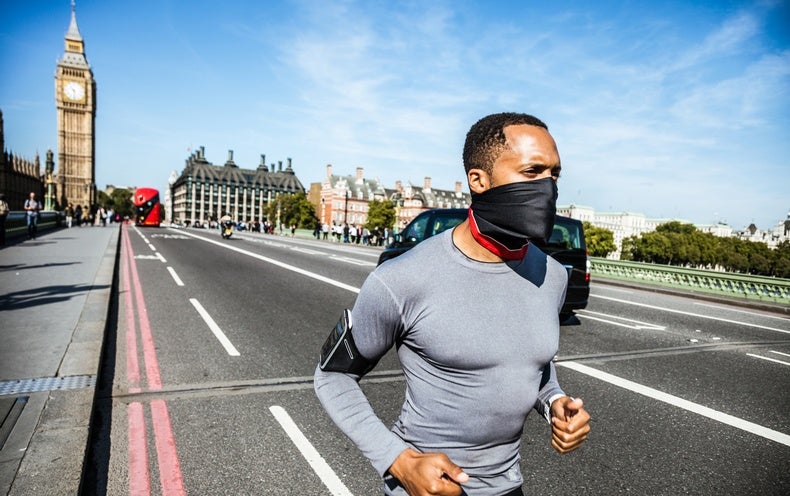 In early August, there was a lot of hubbub around a study that purportedly showed that wearing a neck gaiter, the sleeve-like face covering popular especially among runners, might be worse at stemming the spread of COVID-19 than not wearing a mask at all. Headlines popped up spreading the news, sparking conversations far and wide and forcing many to reconsider their preferred style of face mask. A Washington Post story said “some cotton cloth masks are about as effective as surgical masks, while thin polyester spandex gaiters may be worse than going maskless.” A Forbes article, referring to neck gaiters, said the study “found that one type of face covering might actually be doing more harm than good.”

But the study didn’t show that, nor was it designed to. It was actually a test on how to test masks inexpensively, not to determine which one was most effective. The researchers set up a green laser beam in a dark room. A masked subject was then asked to speak so that the droplets from the speaker’s mouth showed up in the green beam. The whole process was video recorded on a cell phone, after which researchers calculated the number of droplets that showed up. The process was repeated 10 times for each mask (14 in total, one of which was a neck gaiter) and the setup cost less than $200. What was meant as a study on the pricing and efficacy of a test turned into, at least in some journalistic circles, a definitive nail-in-the-coffin for gaiters.

Days after the initial reports that neck gaiters might not only be useless but maybe even harmful, a new round of new reports came out saying that those initial reports were overblown and misleading. The authors of the study even held a press conference where they emphasized that their study was never meant to test the effectiveness of masks. They only tested one gaiter-style mask, which says nothing about that style of mask in general. The combination of reporting on the actual findings of the study and the direct comments from the authors seems to have abated the anti-neck gaiter fervor. But all of this this—or most of it, anyway—likely could have been prevented.

You could make the argument that it’s not a scientist’s job to worrying about how their science might be interpreted. It’s their job to do the research and publish it in a scientific manuscript. Leave the communicating for someone else. But that’s not how the spread of information works.

Fewer and fewer newsrooms have staffers with scientific backgrounds, or who are dedicated to scientific reporting. To be clear, journalists don’t need to be scientists to understand science, but reporting on science does require a certain amount of expertise. When newsrooms ask reporters to cover more and more topic areas and this specialization decreases, an attention to detail is sometimes lost. So, the onus to help journalists (and frankly, all nonscientists) get the facts straight falls to the scientists doing the science. That’s where science communication training comes in.

Science communication, or scicomm as it’s known colloquially, is not a core part of coursework in a majority of degree-granting science programs at the undergraduate and graduate levels. This trend is slowly changing as more institutions incorporate scicomm into their curriculums. Outside of academia, nonprofits and scientific societies are taking up the mantle.

I work for the American Geophysical Union (AGU), a society for Earth and space scientists, in the Sharing Science program, where we teach scientists to communicate with nonscientists through courses, workshops, webinars and other trainings. Aside from the AGU, there is the American Association for the Advancement of Science (AAAS), the Stony Brook–affiliated Alan Alda Center for Communicating Science and the science storytelling organization The Story Collider, to name just to name a few. We teach the so-called “soft skills” that the ivory tower of science has shunned for so long but that are so necessary in effectively communicating.

One thing we stress is “know your audience.” Scientists must think about how their science will be perceived, no matter how relevant or not it might be to the broader public. Science does not exist in a vacuum; it never has. But especially now, and especially with anything related to COVID-19, scientists much be hypervigilant when communicating results and try, to the best of their abilities, to account for as many interpretations as possible. Yes, it is onerous, especially on top of the multitude of other responsibilities that come with being a scientist, but it is necessary.

The traditional ways in which scientists communicate their results (i.e., scientific manuscripts) are not going away anytime soon. However, and while it may be an unfair ask, scientists must not only be able to communicate their science to their peers; they must always think about nonscience audiences as the lines between science and “the public” continue to blur. Training scientists to effectively communicate to, or at least think about, diverse audiences is a necessary part of science.

Election 2020: The Stakes for Science

Coronavirus in the U.S. is spreading like ‘wildfire,’ epidemiologist says

CDC Says Nurses Are at High Risk for Covid-19