How the Supreme Court Could Affect Voting Rules on Election Day 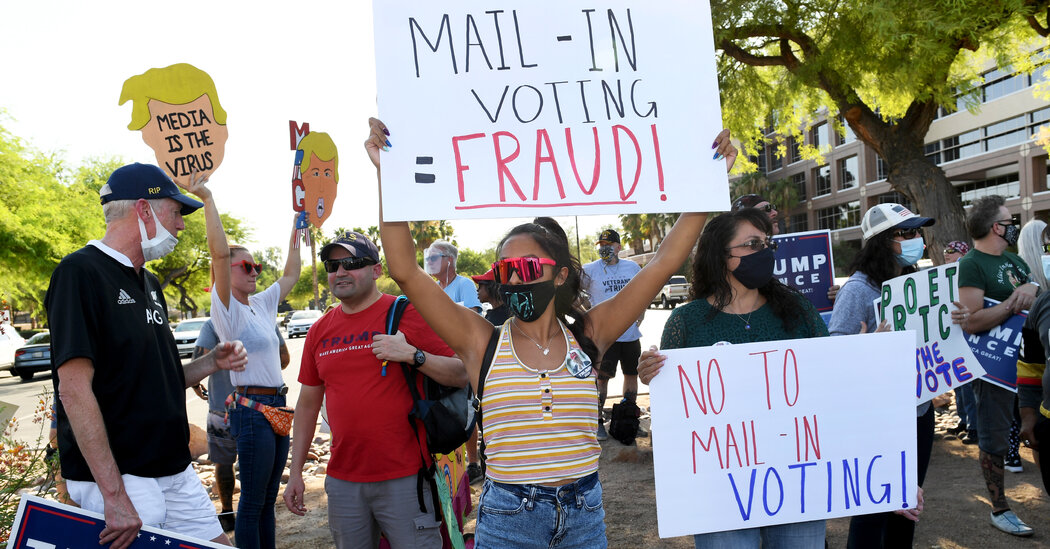 WASHINGTON — A Texas lawsuit over the mailing of absentee ballots to everyone over 65 but no one else. A Nevada case on whether to count mail ballots that lack postmarks. A Florida lawsuit over the right of former felons to vote.

Any number of legal battles over the rules for the Nov. 3 election could wind up this fall before a Supreme Court whose liberal minority was further diminished by the death on Friday of Justice Ruth Bader Ginsburg. And any Supreme Court ruling in some of those cases could resonate nationwide, influencing similar suits filed in other jurisdictions.

But whether Justice Ginsburg’s death could shape the outcome of the presidential race is no simple question, some experts on election law said on Monday. Her loss shifts further to the right a court that already took a largely conservative stance on questions of voting rights and election procedures, especially when Election Day is close.

Absentee and early voting in the general election are already underway in some states, and Justice Ginsburg’s death has made the court itself a central issue in the most bitterly partisan presidential race in memory. And that makes it less clear that the justices would want to risk fanning those partisan fires by taking on cases where its rulings might be seen as overtly political, some election scholars said.

“I think Chief Justice Roberts is very sensitive to perceptions of the legitimacy of the court,” Nathaniel Persily, a Stanford University law professor and an expert on constitutional and election law, said of John G. Roberts Jr. “Whether it’s deciding to take a case, or how they end up deciding it, he knows that if it’s seen as breaking along partisan lines or taking advantage of the death of Justice Ginsburg, that is a real threat” to the Supreme Court’s public standing.

President Trump appears to be betting that the court will make rulings — or uphold ones by lower courts — that would enhance his prospects for victory in November. “We’re going to have a victory on Nov. 3 the likes of which you’ve never seen,” he said last weekend at a campaign rally in Fayetteville, N.C. “Now we’re counting on the federal court system to make it so that we can actually have an evening where we know who wins, not where the votes are going to be counted a week later or two weeks later.”

The court seemed to edge in that direction in April, when it voted along ideological lines to scrap a move by the Democratic governor of Wisconsin to extend the period for voting by mail because of the pandemic.

But the outcomes have been mixed in the few election cases the court has taken up since the Wisconsin decision. In July, the court ruled, again pitting conservatives against liberals, that three Alabama counties were not required to follow a court order relaxing vote-by-mail rules because of the pandemic. But the next month, the justices refused to block a similar loosening of the rules in Rhode Island, saying the state had acted within its discretion.

The Rhode Island case was of the sort that the court is most likely to see before Election Day — a ruling based not on a full-blown hearing, but on a written application for an emergency stay of a lower-court decision. A single justice can act on those requests, but legal questions of any substance are hashed out by the full court before a decision is issued.

Such rulings could have major consequences for election rules, but the court will find it increasingly hard to make major reversals of policies, said Edward B. Foley, an election law scholar at Ohio State University.

One factor, some experts say, is that an eight-member court could be deadlocked, and a 4-4 decision would automatically leave a lower court’s ruling intact.

Another is that time is running out to tinker with election laws.

“The probability of successful litigation to try to change the rules diminishes every day and every hour” as Election Day nears, Professor Foley said. “But on the other hand, the chances that somebody might be successful in undoing a change might not diminish.”

Both campaigns and election officials also need time to adjust their operations to changes in the law, Mr. Persily said. A clear ruling on whether states can send absentee-ballot applications to all voters, he noted, determines whether a campaign needs to spend money to mobilize vote-by-mail supporters.

“There’s a point at which the music has to stop and everyone has to sit in their chair,” he said.

A bent toward the status quo would generally favor Republicans, most of whose lawsuits have sought to block changes in election rules to make it easier to cast mail ballots — or to cast ballots in general. Lawyers for Democrats and voting rights advocates have fought for those same changes, often triggering appeals to higher courts.

Pennsylvania is one example: On Monday, right-leaning websites reported, the Republican-controlled State Legislature said it was preparing to ask the Supreme Court to stay a state court ruling that, among other things, allowed mail voters to place their ballots in drop boxes and extended the period in which late absentee ballots would be accepted as valid.

Many of the other cases that could be appealed to the court involve similar efforts to relax voting rules. In Nevada, the Trump campaign and the Republican National Committee have sued to overturn a new and far-reaching law aiming to make voting by mail easier. One provision of the law requires the state to give absentee voters postage-paid envelopes to return their ballots; the lawsuit argues that because prepaid mail is not generally postmarked, officials will have no way to determine whether late ballots were sent before the deadline.

A federal judge dismissed that suit on Monday, saying the plaintiffs lacked standing. It is not clear whether they will appeal.

In Texas, Democratic Party lawyers have sued to overturn a law allowing absentee ballots to be sent automatically to voters over age 65, while younger voters can obtain ballots only by meeting stringent standards. They say the law violates the 26th Amendment, which bars using age as a reason for denying voting rights to anyone over 18.

And in Florida, the U.S. Court of Appeals for the 11th Circuit struck down a lower-court decision that barred the state from denying voting rights to former felons if they had not repaid court fees and fines. Voting rights advocates had argued that the state law violated the equal protection clause of the 14th Amendment.

There is one election law instance, legal scholars said, in which the Supreme Court would almost certainly hold an emergency session to hear oral arguments: a case filed after the election that raised an issue that might change the outcome.

But that is among the least likely cases to reach the court, they added. The only such suit — Bush v. Gore, over the results of the 2000 presidential election — hinged on ballots in Florida, where the winner would take the White House and a mere 537 votes separated the candidates.

“It takes an election as close as Bush v. Gore to have an outcome anywhere near Bush v. Gore,” Justin Levitt, an election law scholar at Loyola Law School in Los Angeles, said. “Postelection litigation may come, but unless you’re 537 votes apart it’s unlikely to be meaningful to the results.”