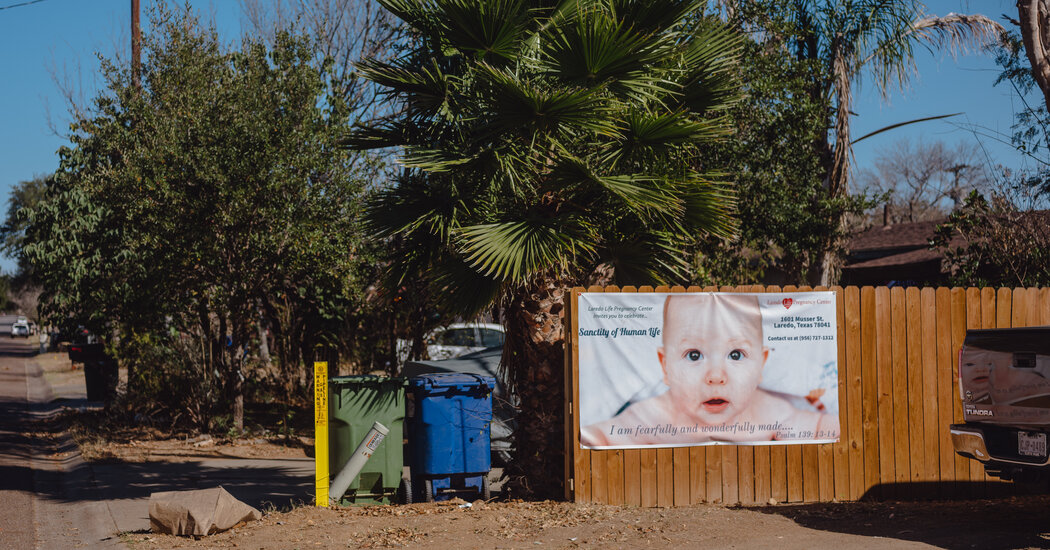 LAREDO, Texas — Like the majority of her neighbors in the heavily Latino community of Laredo, Angelica Garza has voted for Democrats for most of her adult life. Her longtime congressman, Henry Cuellar, with his moderate views and opposition to abortion, made it an easy choice, she said.

But as up-and-coming Democratic candidates in her patch of South Texas have leaned ever more liberal, Ms. Garza, a dedicated Catholic, cast a ballot for Donald Trump in 2016, primarily because of his anti-abortion views.

In choosing Mr. Trump that year and again in 2020, Ms. Garza joined a parade of Latino voters who are changing the political fabric of South Texas. In the Laredo region, where about nine out of 10 residents are Catholic, many registered voters appear to be driven largely by the single issue of abortion.

“I’m willing to vote for any candidate that supports life,” said Ms. Garza, 75. “That’s the most important issue for me, even if it means not voting for a Democrat.”

With a pivotal primary election just a little more than a week away, Ms. Garza is ready to to turn away from Democrats. Pointing at a wall covered in folkloric angel figurines at the art store she owns in Laredo, she explained why: “They are babies, angels, and I don’t think anyone has the right to end their life. We have to support life.”

Voters like Ms. Garza are worrying Democratic leaders, whose once tight grip and influence on the Texas-Mexico border region has loosened in recent electoral cycles. Republicans have claimed significant victories across South Texas, flipping Zapata County, south of Laredo on the bank of the Rio Grande, and a state district in San Antonio. They also made gains in the Rio Grande Valley, where the border counties delivered so many votes for Mr. Trump in 2020 that they helped negate the impact of white voters in urban and suburban areas of the state who voted for Joe Biden.

Much is at stake in Laredo, the most populous city of the 28th Congressional District, where Latinos are a majority, and which stretches from the eastern tip of San Antonio and includes a western chunk of the Rio Grande Valley. Since the district was drawn nearly three decades ago, the seat has been held by Democrats. Mr. Cuellar has represented the district since 2005. His moderate and sometimes conservative views — he was the only Congressional Democrat to vote against a U.S. House bill that would have nullified the state’s near-total ban on abortion that went into effect last September — have frequently endeared him to social conservatives and Republicans.

But he now finds himself locked in a tight fight against a much more liberal candidate backed by the progressive wing of the party that includes Senator Bernie Sanders and Representative Alexandria Ocasio-Cortez. Mr. Cuellar, whose home was raided last month by the F.B.I. as part of an investigation that neither he nor the government has disclosed, beat his opponent, Jessica Cisneros, by four percentage points in 2020.

Should he lose the primary on March 1 to Ms. Cisneros, a 28-year-old immigration lawyer who supports abortion rights, the path to flip the House of Representatives could very well run through South Texas, as Republicans have vowed an all-in campaign focused on religious and other conservative values.

Across Laredo, a city home to one of the busiest land ports of entry in North America and where Catholic Masses are embedded in everyday life, anti-abortion messages abound. The polarizing issue appears firmly settled in this stretch of the state, as evidenced by sermons at the 34 Catholic parishes, the graphic billboards at intersections and the fact that the last abortion clinic in the area closed nearly 20 years ago.

“My priest doesn’t tell people how to vote, but he reminds us to vote with our Catholic conscience,” said Betty Flores, the city’s mayor from 1998 to 2006. Ms. Flores, a longtime friend of the Bush family, also identifies as a Democrat — an “old Blue Dog” Democrat, she said, referring to her moderate views. While she sees herself in the anti-abortion column, she said she does not believe in enacting policies that govern over women’s bodies.

A Guide to the Texas Primary

The 2022 midterm elections begin with the state’s primary on March 1.

Even Sylvia Bruni, the leader of the Democratic Party in Webb County, which includes Laredo, said she has made peace with the duality of her anti-abortion views and the broader Democratic mandate that seeks to expand health care to women, including the termination of pregnancies.

“I speak for myself,” said Ms. Bruni, a Catholic, “but as anti-abortion as I am personally, I don’t think I have the right to tell others what to do.”

Mr. Cuellar has retained the seat since 2005 largely because of his moderate views. In voting last September against the Women’s Health Protection Act, the measure that sought to protect abortion rights, he cited his Catholic upbringing.

The measure, which passed, appears to be doomed in the Senate. But Mr. Cuellar’s vote was a symbolic nod to his socially conservative constituency, whose members drive every day past banners with images of fetuses that read, “God says ‘All Lives Matter,’” or of a downcast Virgin Mary praying for those considering abortions.

With the Texas law banning most abortions after about six weeks of pregnancy, and with the Supreme Court possibly on the verge of upholding a Mississippi law that bans most abortions after 15 weeks, many South Texas voters will do whatever it takes to preserve those gains, said Eddie Lucio Jr., a state senator often compared with Mr. Cuellar because of his moderate views.

“There is no such thing as an abortion-rights Catholic,” said Mr. Lucio. “There is a silent majority that don’t say anything. But when they go vote, they go vote for the anti-abortion candidate.”

Outside Laredo, Texans remain deeply divided on the issue. According to a recent poll by the Texas Politics Project at the University of Texas at Austin, about 46 percent of the 1,200 respondents believe that current abortion laws should either be more strict or left as they are; 43 percent said they should be less strict.

On a recent afternoon at St. Vincent de Paul Catholic Church in Laredo, Jose Brizuela, 73, a retired businessman, said he had always voted for Democrats, including Mr. Cuellar, driven by their agenda to offer aid to the poor. But if the next Democratic nominee supports abortion rights, he said, “I’m ready to vote for the Republican.”

With Mr. Cuellar’s seat in jeopardy, Republicans are prepared to mount their first real challenge in the district in decades. If the news of the investigation involving Mr. Cuellar were to keep many of his supporters home, Republican leaders say Ms. Cisneros’s progressive values, especially when it comes to abortion, may be a bridge too far for the larger faith-based general electorate. In the primary, seven Republicans are vying for the nomination.

“There used to be a mentality that, ‘Oh, we only vote this way,’” said Luis De La Garza, chairman of the Webb County Republican Party. “We are showing them that it is OK to vote for something they actually believe in. I think voters are starting to see that we have the same religious and family values.”

Last November, Republicans flipped a once solidly Democratic district in San Antonio by 286 ballots in a special election runoff. Voters also turned out in droves for Republicans in Hidalgo and Zapata Counties, both traditionally Democratic strongholds along the Rio Grande. In 2020, Joe Biden won Hidalgo County, home to McAllen, by 17 percentage points, a narrower victory when compared with Hillary Clinton’s 40-point win four years earlier. And in nearby Zapata County, Mr. Trump won by five points.

The state, while increasingly diverse and more progressive, has not translated into more votes for Democrats. In Webb County, only half of the registered voters cast ballots in 2020.

Still, progressive Democrats are working overtime to energize younger, first-time voters — both to defeat Mr. Cuellar in the primary and the Republican candidate in November. During a recent visit to San Antonio to campaign for Ms. Cisneros, Ms. Ocasio-Cortez, the progressive congresswoman from New York, called the 28th District a “battleground.”

In the last few months, Democrats have intensified their outreach efforts, said Ms. Bruni, and have added more than 2,300 voters.

“We were solidly Democrat, but we’re more conservative than traditional liberal enclaves,” said Sergio Mora, a former chairman of the Democratic Party. “We are more socially conservative. We could lose the seat.”

Sarah Smith, 40, is among the voters who see the district turning red based on the abortion issue alone. Ms. Smith, who favors smaller government — she calls herself a 19th century liberal — and has both Mexican and British ancestry, said she supported Democratic priorities like prison reform but added that maintaining the abortion ban was her priority.

“Maybe it’s time for this area to become Republican,” she said. “Whatever it takes to preserve life.”