How the 2022 Primaries Are Testing Trump’s Role as the G.O.P. ‘Kingpin’ 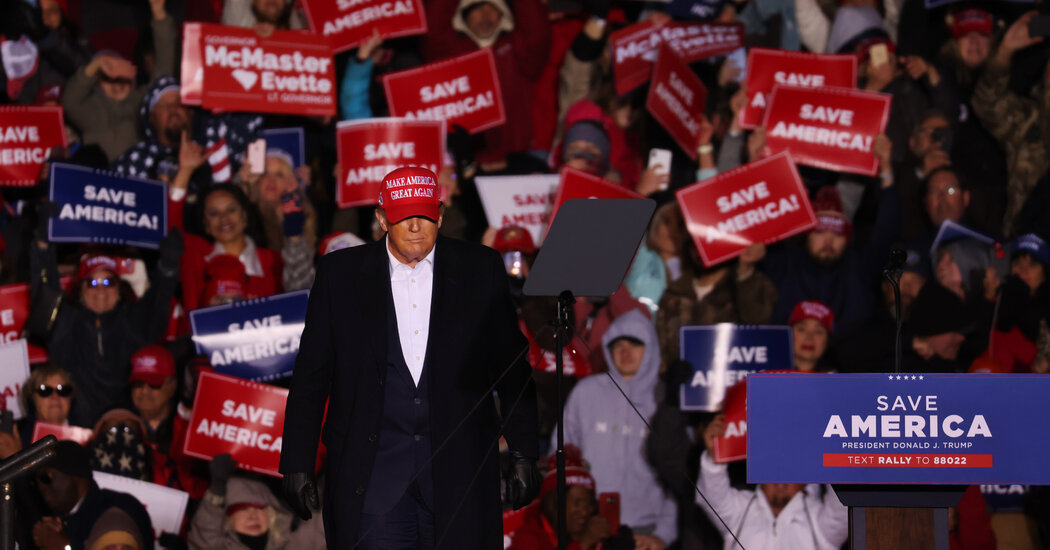 Donald J. Trump has sought to establish himself as the Republican Party’s undisputed kingmaker in the 2022 midterms, issuing more than 120 endorsements to elevate allies, punish those who have crossed him and turn his baseless claim that the 2020 election was stolen into a litmus test for the party.

But the range of Trump-backed candidates has become so unwieldy that even some of his own advisers have warned that his expansive effort to install loyalists nationwide has not only threatened his brand but diluted its impact, exposing him unnecessarily to political risk, according to advisers and Republican strategists.

Mr. Trump’s face-saving decision on Wednesday to retract his endorsement of Representative Mo Brooks, a longtime ally who has slumped in the polls in Alabama’s Senate race, only highlighted the perils of an upcoming primary season that will test the former president’s sway over the Republican Party.

Already, two of Mr. Trump’s early and most prominent Senate endorsements have backfired long before voters head to the polls. In addition to Alabama, his initial choice in Pennsylvania, Sean Parnell, quit the race last fall after abuse allegations emerged in a child custody dispute. And fears of further setbacks have helped keep Mr. Trump on the sidelines so far in choosing a replacement there or a candidate in the Ohio or Missouri Senate races.

Georgia, where Mr. Trump is headed this weekend, represents one of his riskiest bets. He has been fixated on unseating the Republican governor, Brian Kemp. But Mr. Trump’s handpicked challenger has been struggling to gain traction against the well-financed governor less than two months before the primary.

“I don’t know whether he is letting emotion rule his decision making or if he is getting bad advice,” said Glen Bolger, a Republican pollster, “but it seems like he is picking candidates who are pretty weak, and that’s not a place — when you’re trying to be kingpin — where you want to be.” He added that Mr. Trump’s image remained “very strong” among Republican primary voters.

The early stumbles have come as Mr. Trump’s rivals, and even some erstwhile allies, including former Vice President Mike Pence, have become more emboldened to break ranks publicly with Mr. Trump.

The former president’s own obsession with his endorsement success rate as a metric of his power has only magnified attention on upcoming primaries. Mr. Trump crowed after the Texas primary this month about how all 33 people he had endorsed either won outright or were far ahead. But nearly all of those candidates were on a glide path to victory without his backing.

Bigger tests loom. Mr. Trump’s advisers and his adversaries alike have circled May as the month that will either cement his hold on the Republican base or puncture his aura as the party’s untouchable leader.

The only two races for governor in which Mr. Trump is seeking to unseat Republican incumbents, in Georgia and Idaho, are taking place that month, as is the Alabama Senate primary, in which Mr. Trump said he now planned to endorse again. There is also a North Carolina Senate race where Mr. Trump’s choice is not considered the favorite. And in West Virginia, one of the country’s Trumpiest states, his preferred candidate is locked in a bruising race that pits two House members against each other.

Mr. Trump’s backing is still the most coveted in Republican politics, and his outpost at Mar-a-Lago in Florida sees a constant flow of candidates pitching themselves and pledging loyalty.

“The complete and total failure of the Democrat ‘leadership’ has created a demand for the immediate return to the America First agenda President Trump championed,” Taylor Budowich, a spokesman for Mr. Trump, said. “The democratic process has never before seen the kind of power that President Trump’s endorsement has heading into the primary season.”

Perhaps no state embodies the risky gambit that Mr. Trump is undertaking to reorient the Republican Party around his false 2020 fraud claims than Georgia, where he will rally support on Saturday for former Senator David Perdue against Mr. Kemp. Mr. Trump has loudly feuded with the governor over his decision to certify the 2020 election.

Polls have shown Mr. Kemp’s maintaining a lead despite Mr. Trump’s endorsement of Mr. Perdue and appearance in television commercials. In recent days, Mr. Trump also backed challengers to the Kemp-aligned attorney general and insurance commissioner after previously wading into the contests for Georgia’s secretary of state and lieutenant governor.

“I think Trump has overextended himself in Georgia,” said Erick Erickson, a conservative radio host in Georgia. “Many of these candidates won’t have the budget to get that information out there, and Trump doesn’t seem to be throwing big money their way.”

While Mr. Trump seeks to put his imprint on the party across the country, the footprint of his political operation — despite a war chest of more than $122 million entering 2022 — is far smaller. Most of his endorsements come with only a small check and a public statement of support, with some candidates paying him to use his Mar-a-Lago resort for fund-raisers. The candidates must then raise sufficient money on their own to take advantage of his backing — and not all have.

One of Mr. Trump’s political successes has been in the Georgia Senate primary, where Herschel Walker, the former football player, has essentially cleared the field with Mr. Trump’s backing and has emerged as a strong fund-raiser. But Mr. Walker also has a lengthy set of political vulnerabilities that Mr. Trump looked past and Democrats are expected to seize upon. He has faced accusations that he threatened his ex-wife as well as questions about his business dealings and recent residency in Texas.

Other Trump-backed Georgia Republicans are facing challenging primaries, including John Gordon, who entered the attorney general’s race only days ago and is being advised by Corey Lewandowski, Mr. Trump’s first 2016 campaign manager.

In state after state, Mr. Trump’s endorsements have put him at odds with some of the most powerful local Republicans, including several governors.

In Nebraska, Mr. Trump is crosswise with Gov. Pete Ricketts by supporting the rival of Mr. Ricketts’s preferred candidate in the open governor’s race. In Maryland, Mr. Trump is supporting Dan Cox for governor against the former state commerce secretary, Kelly Schulz, who has the support of her old boss, Gov. Larry Hogan. In Arizona, Mr. Trump’s feud with Gov. Doug Ducey is expected to spill into the open governor’s race there, too. Mr. Trump is backing a former newscaster, Kari Lake, and Mr. Ducey has not yet endorsed anyone.

Mr. Trump is holding events in many states to rally his base, pledging to fly as far away as Alaska to try to unseat Senator Lisa Murkowski, the only Republican in the Senate who voted to convict him in his impeachment trial and who is on the ballot this year.

In Michigan, where Mr. Trump will hold a rally in early April, he is trying to defeat two House Republicans who backed his impeachment as well as install numerous loyalists in a state where he has falsely claimed the 2020 election was rigged.

In Missouri, Mr. Trump stayed on the sidelines despite intense lobbying, including from former Gov. Eric Greitens, who resigned in scandal in 2018 but now as a Senate candidate has wooed Mr. Trump in part by pledging to oppose Senator Mitch McConnell as Republican leader.

But this week, Mr. Greitens’s ex-wife accused him of physical abuse in a court filing, and Republicans who have spoken to Mr. Trump are skeptical now that he will back Mr. Greitens. Mr. Trump put out a glowing statement about Representative Billy Long, another Republican candidate for the Senate seat, calling him a “warrior,” though he labeled it a nonendorsement.

Senator Josh Hawley of Missouri, meanwhile, has made the case to Mr. Trump for another candidate: Representative Vicky Hartzler. Mr. Hawley said that Mr. Trump’s “having something to say in the race would mean a lot” in the effort to stop Mr. Greitens.

Mr. McConnell has been deeply concerned about the Missouri race and stayed publicly silent, though at a Senate Republican luncheon this week he told colleagues that “we caught a break,” in reference to the new Greitens accusations, according to one Republican official.

Missouri Republicans are unsure if the new allegations against Mr. Greitens will prove politically fatal, but many remain alarmed by the possibility that Mr. Trump could still support him.

“I do not want to see Mr. Trump embarrassed by a hasty endorsement,” said Peter Kinder, a former lieutenant governor who was a co-chair of the 2016 Missouri Trump campaign. Mr. Kinder called Mr. Greitens a “badly flawed, badly damaged candidate.”

Alyssa Farah Griffin, a former Trump aide who has since become a critic, said the success of Mr. Trump’s endorsements in 2022 would directly impact the next presidential campaign.

“It does bear on 2024,” she said, “because Republicans are going to see who the biggest power broker is.”