How Slime Molds Remember Where They Ate 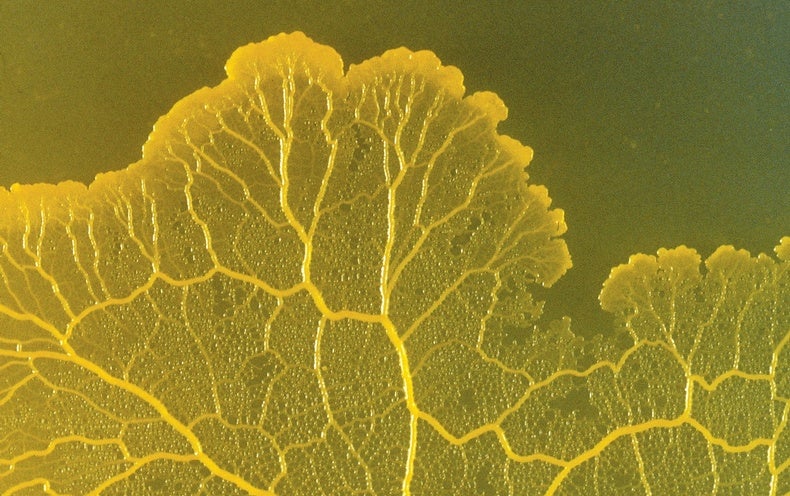 Like all slime molds, Physarum polycephalum has no brain or nervous system—yet it somehow “remembers” food sites for future reference. In a new paper, biophysicists Mirna Kramar and Karen Alim of the Max Planck Institute for Dynamics and Self-Organization in Göttingen, Germany, describe how the organism’s internal structure changes to encode past food locations.

Although slime molds are extremely simple organisms—just a system of interlaced tubes—they can solve complex optimization problems such as finding the shortest path through a maze. Pure stimulus-response activity patterns—for instance, crawling toward increasing concentrations of certain molecules or avoiding harmful mechanical stimuli—cannot explain the extent of their skill. How they can take in and retain information has long remained unclear.

The study, published in the Proceedings of the National Academy of Sciences USA, revealed that when parts of P. polycephalum come in contact with a food source, they release a substance that softens the tube network’s gel-like walls, making them widen from their inherent internal pressure. The slime mold moves by expanding along wider tubes and pruning narrower ones—so the enlarged tubes effectively record past food locations, as they influence the organism’s overall direction of growth even after the food is gone.

The researchers do not yet know what the softening substance is, but by modeling changes in tube diameters, they found it is likely a soluble material that spreads by flow and diffusion. The team suggests this mechanism could also be common in other “living flow networks,” such as vertebrate vascular systems.

Kramar and Alim “have pinned down nicely a mechanobiological mechanism for slime mold behavior implementing something like memory,” says University of Bremen physicist Hans-Günther Döbereiner, who was not involved in the study. Future research into a slime mold’s ability to carry out complex tasks, he says, will require an examination of “molecular signaling, material properties and flow patterns of the cellular fluid regulating its behavior.”

New Jersey Institute of Technology biologist Simon Garnier, who was also not involved in the study, adds that this work builds on prior investigations of how this organism encodes past experiences. The researchers’ model “provides a nice mechanistic explanation for how slime mold achieves this feat,” he says. It could lead to improved network optimization and routing algorithms, Garnier adds, similar to those inspired by ant colonies.