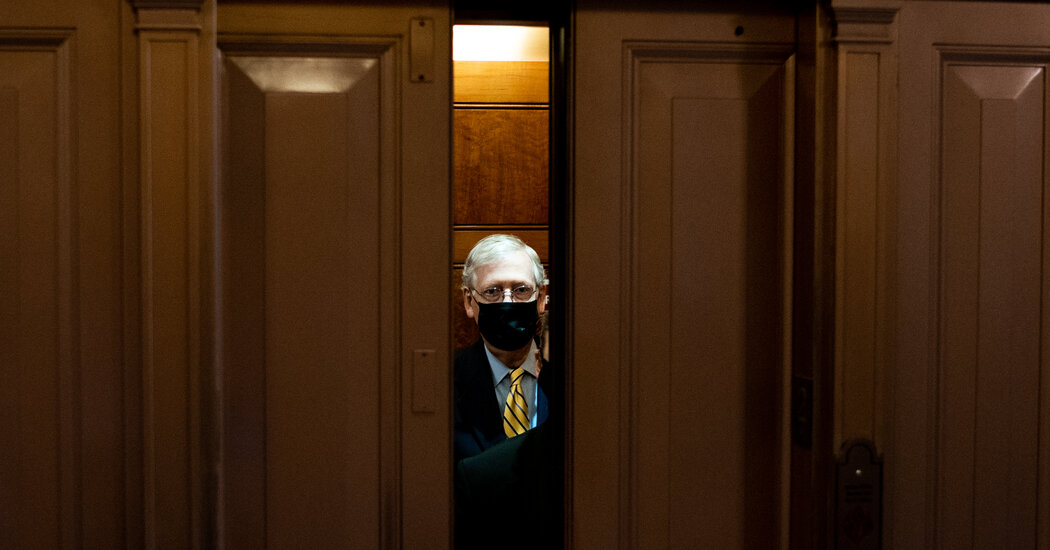 WASHINGTON — Hours after the Supreme Court announced the death of Justice Ruth Bader Ginsburg on Friday, Senator Mitch McConnell of Kentucky, the majority leader, vowed that the Senate would vote on a replacement named by President Trump, setting up what is all but guaranteed to be a heated fight over the nation’s highest court that carries heavy political consequences.

That statement answered the question of whether Mr. McConnell, who in 2016 blocked President Barack Obama’s Supreme Court nominee because it was an election year, would dare try to confirm one named by Mr. Trump so close to an election. He would. Now the question is, can Mr. McConnell pull it off?

The process is likely to be ugly, but it can be done. Here’s how it works.

Can Democrats block President Trump’s nominee through a filibuster?

Democrats eliminated the 60-vote threshold for most judicial nominees in 2013, frustrated by Republicans’ use of the filibuster to slow and impede Mr. Obama’s agenda. In turn, angered by resistance to the nomination of Justice Neil M. Gorsuch in 2017, Republicans abolished the limitation on Supreme Court nominees, further whittling down the scope of the filibuster.

As a result, Mr. McConnell could bring the nomination to the Senate floor and approve it with a simple majority vote. Mr. Trump signaled on Saturday that he would formally name someone to fill the vacancy in the near future.

“We have this obligation, without delay!” he tweeted, referring to the selection of justices.

It remains unclear, however, whether Mr. McConnell, himself up for re-election along with a handful of vulnerable Republican incumbents, will try to advance the nomination before Election Day. He could also opt to do so in a lame-duck congressional session after Nov. 3.

Does McConnell have the votes to confirm a nominee?

Because Republican hold a slim majority — 53 to 47 — Democrats would need only four Republicans to join them in opposition to sink the nominee. (In the case of a tie, Vice President Mike Pence, in his role as president of the Senate, would cast the tiebreaking vote.)

Though Mr. McConnell vowed that the Senate would vote on Mr. Trump’s chosen nominee, he notably made no mention of when that would occur — a signal that he was weighing the political calculus for the handful of vulnerable Republican senators facing tough races.

Given Mr. McConnell’s decision to refuse so much as a hearing for Merrick B. Garland, Mr. Obama’s pick to succeed Justice Antonin Scalia in 2016, a handful of Republicans have signaled a desire to wait until after Election Day to approve a nomination. It is unclear, however, what objections remain to approving a nomination in the lame-duck session between November and the start of a new Congress in January.

Senator Susan Collins of Maine, one of the most vulnerable Republicans facing voters this year, told The New York Times this month that she would be uneasy about seating another justice in October. “I think that’s too close — I really do,” she said.

Senator Lisa Murkowski of Alaska told a local radio station in an interview before Justice Ginsburg’s death was announced that she would not vote to confirm a Supreme Court nominee before Election Day.

Other top Republicans, including Senator Lindsey Graham of South Carolina, the Judiciary Committee chairman, and Charles E. Grassley of Iowa, have previously expressed similar reservations given their party’s blockade of Judge Garland in 2016, although it is unclear whether they will hold to their previous remarks. Mr. Grassley, the former Judiciary chairman, had said that he would not conduct Supreme Court confirmation hearings in a presidential election year.

“I want you to use my words against me,” Mr. Graham said in 2016. “If there’s a Republican president in 2016 and a vacancy occurs in the last year of the first term, you can say Lindsey Graham said let’s let the next president, whoever it might be, make that nomination.”

But on Saturday, Mr. Graham, a loyal ally of Mr. Trump’s who is facing a more difficult than expected re-election fight, signaled that he has changed his mind since then, pointing to comments he made this year in which he said that after the bruising battle over Justice Brett M. Kavanaugh’s confirmation, “the rules have changed, as far as I’m concerned.”

What effect will the election have on the vacancy?

The proximity of the election is likely to weigh heavily.

Ms. Collins is already facing the toughest race of her career in Maine, in part because of her 2018 vote to confirm Brett M. Kavanaugh to the Supreme Court. Mr. Graham is also locked in a tough race in South Carolina, with one poll showing him tied with his Democratic opponent.

And the partisan wounds from Mr. Garland’s stalled nomination, the Kavanaugh confirmation and Mr. Trump’s impeachment trial are likely to fester even further with the prospect of another lifetime Supreme Court appointment, galvanizing the most fervent members of each party’s base.

Mr. McConnell, who is also up for re-election, counseled his members to avoid stating a position on how they would handle the vacancy.

“This is not the time to prematurely lock yourselves into a position you may later regret,” Mr. McConnell wrote. “I urge you all to be cautious and keep your powder dry until we return to Washington.”

And hypothetically, Mr. McConnell’s majority could narrow even further if Mark Kelly, the Democratic nominee for Senate in Arizona, defeats Senator Martha McSally, the Republican incumbent, and is seated before January 2021. Because Ms. McSally was appointed to her seat and began serving last year, the race is technically a special election. Mr. Kelly could be sworn in as early as Nov. 30.

On Friday, Republican and Democratic election lawyers told The Arizona Republic that such an outcome was possible.