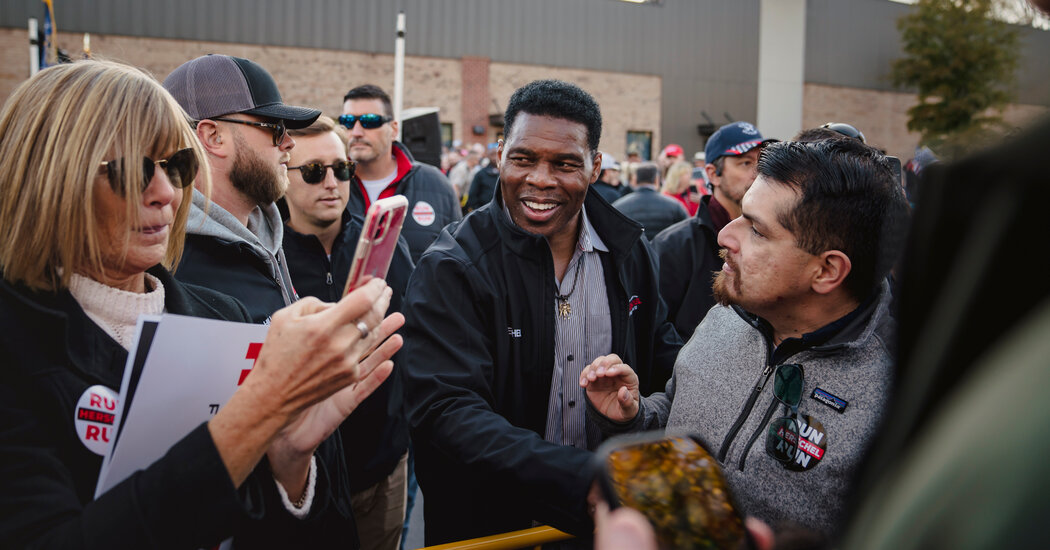 The steady stream of tough headlines for Herschel Walker has always obscured one stubborn fact about the Senate race in Georgia: He could still win.

With the runoff election just days away, the conventional wisdom holds that Senator Raphael Warnock is waltzing toward re-election against an inexperienced Republican opponent who has a thin grasp on policy issues, avoids reporters, faces serious allegations about his personal conduct and has been known to ramble on the stump. But if things were that simple, Warnock would have won handily in November.

And if there’s one thing American politics keeps teaching us, it’s to be humble about predicting what voters will do. With that in mind, here are two basic ways to look at the Georgia runoff on Tuesday:

The case for Warnock

Under this theory, the runoff is Warnock’s to lose.

Many Republicans will stay home, the thinking goes, because they no longer believe that their vote matters much. It’s hard to make the case that 51 Democrats in the Senate, as opposed to 50, would represent some huge threat to conservative priorities and values. Denying Democrats a majority vote on Senate committees is not the kind of argument that fires up the Republican base.

Runoff elections are driven by who can persuade more of their supporters to vote yet another time. And Warnock has a battle-tested turnout operation that has now performed well over three elections.

The Walker campaign, by contrast, is relying on Gov. Brian Kemp — who is no longer on the ballot — to drag a weak candidate across the finish line. Senate Republicans have basically rented Kemp’s field program for the runoff, but it’s not at all clear that an operation built to turn out voters for Kemp can change gears so easily. Walker drew about 200,000 fewer votes than Kemp did, suggesting that there’s a large chunk of Republican voters who find the Senate hopeful unworthy. Forced to stand on his own two feet, Walker might crumble.

Democrats are also outspending Republicans heavily down the stretch. Since Nov. 9, they’ve spent more than double what Republicans have spent on the runoff on digital and television advertising — nearly $53 million versus a little over $24 million, according to AdImpact, a media tracking firm. The two parties were much closer to parity in the three months before Election Day, though Democrats had a slight edge in spending.

The case for Walker

The second theory rests on the fact that Georgia is still fundamentally a right-leaning state, as this year’s blowout race for governor showed. Perhaps the state’s historical tendencies will prove decisive in the runoff, whatever Walker’s deficiencies as a candidate.

Warnock finished ahead of Walker in the general election by fewer than 40,000 votes. The Libertarian candidate, Chase Oliver, received more than 81,000 votes — and he is not on the ballot this time. Oliver earned about 50,000 votes more than the Libertarian candidate did in the race for governor, suggesting that he was a sponge for conservatives who could not stomach Walker. If only 46 percent of Oliver’s supporters vote for the Republican this time, Warnock’s margin on Nov. 8 will be completely erased.

It’s possible, too, that voters who chose Kemp but not Walker in November will change their minds — if they show up, that is. Walker drew a lower share of the vote than Kemp did, not just in metro Atlanta but also in the most conservative areas of the state. According to The Atlanta Journal-Constitution, Walker ran behind Kemp by at least six percentage points in eight counties — most of them Republican strongholds, with the exception of Cobb County.

Walker’s indictment of Warnock was always a simple one: He’s another vote for President Biden’s agenda. And, Biden, with an approval rating in the 30s or low 40s, is about as popular in Georgia as the Florida Gators. So Warnock was careful, during his lone debate with Walker, not to associate himself too closely with Biden.

Kemp is leaning heavily on an anti-Biden message as he stumps for Walker. “Herschel Walker will vote for Georgia — not be another rubber stamp for Joe Biden,” the governor says in one ad.

A fund-raising email sent on Thursday by the Republican National Committee made a similar pitch. “If Herschel Walker wins, it’ll send shock waves through the nation and put a stop to the Democrats’ socialist agenda,” it read. “But if he loses because Grassroots Republicans didn’t do enough to help, we’ll have two years to regret it.”

Then there’s the Trump factor. In 2021, Democrats won the state’s two Senate seats under what were arguably fluke circumstances: They were facing two Republican candidates, David Perdue and Kelly Loeffler, who had been damaged by insider-trading scandals, while Donald Trump was railing about a stolen election. In the end, many rural voters simply decided to sit out the runoff.

This time, there’s no controversy over the general-election results, and Trump is keeping a much lower profile.

The compressed time frame might play to Walker’s advantage, too. In 2021, there were nine weeks between Election Day and the combined runoff and special election for Georgia’s two Senate seats; Democrats used that time to out-organize Republicans. This year, because of a new Georgia election law, the runoff period is just four weeks, with less time for early voting.

Many of the younger voters who showed up for Warnock during the midterms, meanwhile, might not bother to vote, now that the perceived stakes are lower.

One recent poll, commissioned by AARP, shows Warnock with a narrow lead of 51 to 47 percent — within the margin of error. Although Warnock was up by 24 points among voters 18 to 49 years old, he was behind by nine points among voters 50 and older. The poll assumes that those older voters will make up 62 percent of the electorate in the runoff, but that’s just an assumption.

Turnout among the Black voters whom Warnock needs to win is no guarantee, either. As my colleague Nate Cohn notes in his newsletter, the data so far suggests that “the Black share of the electorate sank to its lowest level since 2006,” including in Georgia.

A surge in turnout among Black voters helped Warnock win in 2021. “A similar increase this time,” Nate writes, “might give Mr. Warnock a fairly comfortable victory.” But there’s no reason to think that history will repeat itself.

What the numbers show so far

It’s never wise to read too much into the early-voting numbers, and one can make a plausible case for either candidate.

“I don’t think anybody knows what’s going to happen on Tuesday,” said Martha Zoller, a conservative radio host and a former aide to Kemp and Perdue, noting how much the length and circumstances of runoff elections in Georgia have varied in the past. “Nobody knows what the turnout should look like.”

That doesn’t necessarily mean that everyone assumed to be a Democrat voted for Warnock, or that all of those assumed to be Republicans voted for Walker, but it’s one potential indicator that Warnock is well ahead among the 831,000 Georgians who have already cast ballots.

These numbers are a mirage, Republicans argue. According to Scott Paradise, Walker’s campaign manager, Democrats are benefiting from the fact that many Republican counties waited until Monday to allow early voting.

Nine of the 10 counties with the highest turnout on Monday, Paradise noted in a Twitter thread this week, were counties Walker won in November by huge margins. There are a million or so voters who cast ballots in both the Republican primary and the general election but had not yet cast early ballots, he noted.

Even if it is behind in the early vote, the Walker campaign is banking on a surge of Republican turnout on Tuesday. Going into Nov. 8, Warnock was ahead by 255,000 votes, but Walker won Election Day voters by nearly 220,000 votes.

That margin is close enough to keep Democratic strategists up at night mumbling the words “Senator Walker” in their sleep; in 2021, relatively fewer Republicans voted early than they did in 2020. Few Democrats will rest easy until all the votes are counted this time around.