How Did the Wildfires Start? Here’s What You Need to Know 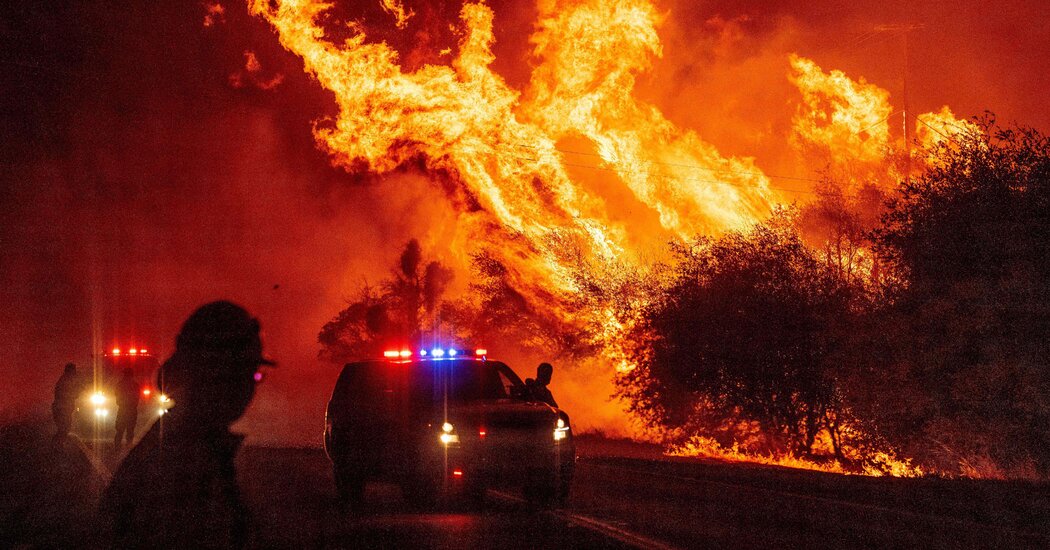 Wildfires are burning across the West, plunging California and other states into compounding crises. As residents confront the fires, the pall of smoke they create, the region’s continuing heat wave and related challenges, here are answers to some essential questions.

How did the wildfires start?

Most of the fires in California are caused by people. The El Dorado Fire, which has grown to more than 10,000 acres, was ignited when a family used a “pyrotechnic device” to announce the gender of a new baby.

Many others are caused by more mundane human actions, like driving a car that sends soot into dry vegetation, as was the case with the Apple Fire in Southern California this year.

Still others have been caused by power transmission lines or other utility equipment, which may spark and ignite fires in remote areas. Pacific Gas and Electric equipment caused the deadly Camp Fire in 2018.

In Oregon, The Statesman Journal reported that fires in the Santiam Canyon area were ignited when falling trees knocked down power lines.

But sometimes natural phenomena are to blame, igniting fires in unavoidable ways. This year, unusual dry lightning storms sparked some of the biggest blazes.

Once the fires get started, fierce winds have blown them out of control up and down the West Coast.

What role does climate change play?

Experts say that climate change is driving the severity of the fires — how big they get, how quickly they spread, and how difficult it is to fight them as they bear down on communities.

This year’s fires have been made worse by a record-shattering heat wave, which scientists have said is part of the region’s increasingly extreme swings between hot, dry weather, when fires are likely to start, and heavy rain that spurs the growth of plants that will become fuel for fires the next time the weather turns hot and dry.

Gov. Gavin Newsom of California has emphasized the ties between climate change and the severity of this year’s fires.

“Never have I felt more of a sense of obligation and a sense of purpose to maintain California’s leadership not only nationally but internationally to face climate change head on,” he said on Tuesday.

The legacy of a more than century-long policy of total fire suppression is also rearing its ugly head, experts have said. That policy of extinguishing every fire has harmed ecosystems that naturally depend on fires to clear space for new growth, as well as Native American communities who have used fire to care for huge swaths of land for millenniums.

Is this year worse than other wildfire seasons? Why?

Yes, it is worse, for many of the reasons above.

Cal Fire, the state’s fire agency, reported on Wednesday that more than 14,000 firefighters were battling 28 major fires across the state, and that more than 2.5 million acres have burned this year, far outstripping any previous record in the state’s history.

Eight people have died, and more than 3,700 structures have been destroyed.

Daniel Swain, a California climate expert, said recently that he was alarmed by the sheer breadth and acreage of the blazes burning at the same time across a variety of ecosystems. On top of that, it’s still early in the wildfire season, which scientists have warned repeatedly is stretching longer and longer.

“I’m running out of superlatives,” Mr. Swain said — and that was late last month.

The fact that the fires this year are layered atop the continuing coronavirus crisis is another reason that it feels so different. For millions of Californians, the outdoors are a respite. But now, smoke has made the air outside toxic across much of the state, national forests are closed, and some of the places most treasured by residents could be damaged.

Where are the wildfires burning? Which ones are the most troubling?

There are currently dozens of fires burning just in California; the biggest is the largely uncontained Creek Fire, which prompted Governor Newsom to declare a state of emergency in Fresno, Mariposa and Madera Counties. The fire grew so quickly over the weekend that members of the California National Guard had to rescue trapped campers by helicopter from the Sierra National Forest.

The governor also declared a state of emergency in San Bernardino County, where the El Dorado Fire has prompted widespread evacuations and road closures, and in San Diego County, where the Valley Fire was burning. The Bobcat Fire in the Angeles National Forest threatened homes in the Los Angeles suburbs.

Meteorologists have expressed alarm at the rapid overnight growth of the Bear Fire, which approached Lake Oroville and crept unsettlingly close to where the town of Paradise was devastated by the Camp Fire, the deadliest on record in the state.

The governor and others have warned that some of the biggest clusters of fires that have been fought by fire crews for weeks should not be underestimated. For example, although the L.N.U. Lightning Complex is 91 percent contained — which typically signals that a fire is a much less significant threat — Mr. Newsom said on Tuesday that hot, dry winds could blow its embers out of control again.

“The wildfire situation in California and Oregon has now escalated to the point that I can no longer keep track of the countless massive, fast-moving, and potentially very dangerous fires,” Mr. Swain, the California climate expert, wrote on Twitter. “The geographic scale and intensity of what is transpiring is truly jarring.”

What is the Air Quality Index, and how do I read it?

For millions of Californians fortunate enough to be outside the direct path of the flames, air quality is a major concern. One look out the window in the Bay Area on Wednesday morning would yield a pretty clear indication that things were not normal.

Beyond that, you can check AirNow, a website and app run by the Environmental Protection Agency, for the Air Quality Index. The higher the index, the worse the air. Anything above 100 is bad for sensitive groups — which includes even more people than usual, in light of the pandemic. Experts have said that poor air quality could aggravate Covid-19 symptoms or make people cough more, making them more contagious if they are infected.

Some Bay Area residents rely on PurpleAir, another website that uses data from air quality sensors around the world.

If the air quality is poor in your area (and it is in much of California), you should try to stay indoors with the windows closed if possible. A high-efficiency air filter is helpful as well. Many Californians, though, have neither option, and must head out to work each day in low-paid essential jobs, often in farm fields.

Why is the sky orange?

According to the Bay Area Air District, the region’s air pollution control agency, the orange skies around San Francisco and in much of Oregon and Washington are the result of ash and smoke from fires, rising high and spread widely by strong winds. The smoke particles tend to scatter blue light from the sun, while allowing “yellow-orange-red light to reach the surface, causing skies to look orange,” the agency said on Twitter.

If the smoke is thick enough, most of the sun’s light reaching that area will be scattered and absorbed before reaching the ground, causing those apocalyptically dark skies during the day.

Should I wear an N95 mask to protect myself from wildfire smoke?

Ordinarily, the answer would probably be yes — although a mask is not as effective as just staying indoors.

But this is the opposite of an ordinary time, and public health officials are advising against buying N95 respirator masks for personal use, because the limited number available may be needed by medical professionals and other workers who must be outside.

Wearing a more common cloth or surgical mask outside is a good idea — though it shouldn’t be all you do to protect yourself from smoke, just as a mask shouldn’t be your only precaution against the spread of the coronavirus.

How can we stop fires from happening?

Many experts say that’s the wrong question. Instead, they say, policymakers must recognize that wildfires will happen, and discourage or ban development in fire-prone areas. Local leaders must take steps to make their communities easier to flee on short notice, they say, and homeowners can do things to keep their homes from being damaged.

Forestry and fire management experts are increasingly saying that prescribed burns must become a bigger part of the strategy. In a prescribed burn, firefighters and other professionals intentionally light fires in areas where excess vegetation should be cleared, at times when the weather is not too hot and dry to control the flames. Then when a wildfire strikes those areas, it won’t burn as hot or as destructively.