How David McCormick Is Attempting a MAGA Makeover 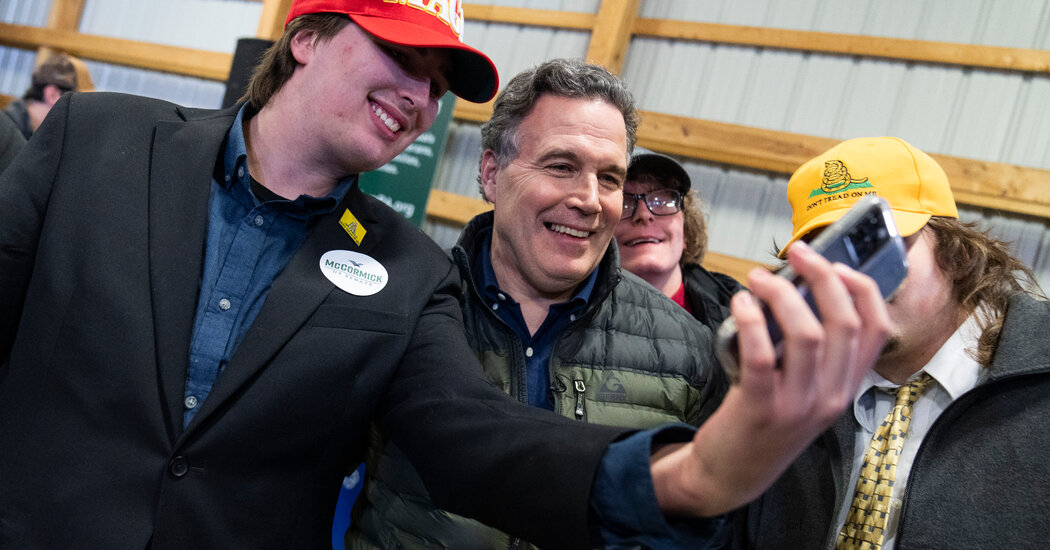 By any conventional measure, David McCormick’s pedigree is impressive.

One credential the candidate for Senate in Pennsylvania hasn’t quite secured: MAGA champion.

Like Republican candidates across the country, McCormick has been studiously trying to cast himself as a Trump-style contender, hoping that he can win over enough of the former president’s supporters to win the nomination in a crowded primary.

But this MAGA makeover hasn’t been easy. McCormick says he’s a fan of Donald Trump. But he also has a record of breaking with the former president, and of holding positions at odds with the base of the Republican Party. And while he has strong ties to the state — he was raised in Bloomsburg, a town of about 15,000 people along the Susquehanna River — McCormick’s work for a hedge fund that was closely linked to China has made it difficult for him to transform into a populist.

In interviews, McCormick has argued that his experience on China is an asset, and his campaign disputes the notion that he has vulnerabilities with the Trump base.

“Dave is the only true, America First candidate that if elected will work every day to restore the pro-growth policies implemented by President Trump, including getting our economy back on track, standing up to China, restoring U.S. strength on the world stage, and securing our border,” said Jess Szymanski, a McCormick campaign spokesperson.

‘He doesn’t have the talk down yet’

Until recently, McCormick was CEO of Bridgewater Associates, a hedge fund whose fieldstone-and-glass headquarters are on a wooded, 22-acre campus in Westport, Conn. It’s a world away from Pennsylvania cities like Scranton, McKeesport and Aliquippa, which have been hit hard by the kinds of shifts in global trade that Bridgewater’s traders and analysts seek to monetize each day.

McCormick is married to Dina Powell, a former Trump administration official who is now at Goldman Sachs. The couple has been warning their friends that McCormick plans to play up Trump-like views on the campaign trail — what they described as simply the cost of running in a Republican primary right now, according to two business associates of his from Wall Street who asked not to be named discussing private conversations.

So far, McCormick has work to do, according to longtime Trump associates.

McCormick may not want to fully mimic Trump. In Pennsylvania, where President Biden won by 1.2 percentage points, he may be better off running in what Christopher Nicholas, a Republican consultant who is neutral in the race, called the “Trump-adjacent lane.”

McCormick’s bid may test how close a candidate has to be to Trump to get in the Trump-adjacent lane.

A former Democrat, McCormick has made voluminous comments on world affairs, and they aren’t always very MAGA.

In 2016, during a speech at the West Point Society of New York, he criticized the “impulse among some candidates to close our doors and leave the world to fend for itself.” In 2017, he described Trump aides as having “no sense of how the world works.”

In a 2018 op-ed in The Washington Post, he backed Amy McGrath, a Democrat who would later challenge Senator Mitch McConnell, in her race against Representative Andy Barr, Republican of Kentucky.

More recently, McCormick called the Jan. 6 riot at the Capitol “horrific” and “a dark chapter in American history.”

What’s an aspiring Republican senator to do?

McCormick’s first task was to line up Trump administration aides to vouch for him, including Hope Hicks, Stephen Miller and Cliff Sims, all of whom are serving as campaign advisers. David Urban, a fellow West Point alum who led Trump’s Pennsylvania campaign in 2016, is also supporting him. Matthew Pottinger, a China hawk and Trump’s deputy national security adviser, has endorsed him.

Next, he repositioned himself in Trump-friendly media outlets such as Fox News and the Washington Examiner.

In an interview with the Fox News host Mark Levin, McCormick said he was running against “the weakness and wokeness that you see across the country.” He noted that he had been driving a Ford F-150 pickup across Pennsylvania to meet voters. And though his father was a university president, he made sure to mention the “family farm,” which he now owns.

Breitbart, the right-wing website founded by Steve Bannon, the former Trump aide, has given McCormick especially favorable coverage. There was a story quoting “sources close to” McCormick that ran under the headline: “Exclusive — ‘Populist Potential’: CEO of World’s Largest Hedge Fund Plans to Go Full MAGA in Looming Pennsylvania Senate Bid.” An interview with McCormick quoted him calling for a new strategy to confront China. Another story included photos of McCormick walking along the U.S.-Mexico border.

“We need to return to the Trump policies that worked,” McCormick said in the story. “Finishing the border wall is the backbone of any serious plan.”

McCormick has made comments over the years that were critical of China’s trade practices, particularly its theft of intellectual property, allies note. As a Treasury official, he called for stricter controls on exports of U.S. technology that could be used for military purposes.

But other past comments on the U.S.-China relationship are now being exhumed by reporters and weaponized by his opponents.

“When China succeeds, America succeeds,” McCormick wrote in a 2007 paper published in an economic journal. “The United States must also avoid the siren song of protectionism.”

But McCormick’s bigger problem may be Bridgewater’s extensive work in China. Ray Dalio, the hedge fund’s founder, has been described as “fascinated” by the country — so much so that he modeled some of Bridgewater’s internal governance structures on “aspects of Chinese political ideology,” according to a Wall Street Journal account.

Before leaving Bridgewater last year, McCormick told staff on a conference call that he disagreed with Dalio’s comparison of China’s human rights record to that of a “strict parent” — a story that was promptly retold by Bloomberg. He then laid out his own views in an op-ed for FoxNews.com, writing that it was “past time for America’s leaders to confront head-on the Chinese Communist Party.”

That wasn’t enough to stave off his opponents. The campaign of Mehmet Oz, one of his Senate primary rival, better known as Dr. Oz, has aired an ad accusing him of “selling us out” as a Wall Street executive and criticizing his China ties; Pennsylvania Democrats put up a website, blessedbyChina.com, with a selectively clipped highlight reel of his comments over the years.

There are two endorsements that could help McCormick fend off these attacks, Republicans said.

One of them would be from Trump, who is not backing a current candidate. The other would be from the Fox News host Tucker Carlson, whose own reinvention from bow-tied conservative to fiery populist has made him one of the right’s most powerful voices.

As Nunberg, the former Trump adviser, put it, “All you need is one segment by Tucker.”

What’s in a political name?

An unknown candidate who happens to share the name of a famous politician decides to run office. It’s the plot of the 1992 Eddie Murphy comedy “The Distinguished Gentleman” — and a minor story line in the Texas primary election next week.

Republicans voting for Texas governor on Tuesday will find Rick Perry on their ballot. Not the former three-term governor and energy secretary in the Trump administration. It’s another Rick Perry, who’s campaigning as a fifth-generation Texan and Christian conservative from Parker County in north central Texas. He emailed us praising us for being “persistent” in tracking him down, but he declined to be interviewed. Attempts to reach the former governor were unsuccessful.

In politics, the name is the brand: Roosevelt, Kennedy, Clinton. For George P. Bush, whose uncle and grandfather were both president, his famous name is both a blessing and a curse as he runs for state attorney general.

“I’m the first person to admit that having a famous name at least gives me some exposure that perhaps if I did not have a famous name I would not have gotten,” said Robert Kennedy, Jr., an Alabama Democrat who won a 2018 primary for Congress, but lost the general election. Kennedy isn’t related to the Massachusetts Kennedy family. He was named after his dad, who was from Philadelphia.

Bob Stump was a political legend in Arizona’s West Valley who died in 2003 shortly after serving for more than 25 years in Congress. When another Bob Stump — whose legal name is actually Christopher Robert Stump — ran for Congress in 2018, it didn’t go over well with the congressman’s widow. In a letter to local news outlets, she accused the candidate of “misleading the voters.”

That prompted candidate Bob Stump’s mother to jump in with a letter of her own, detailing a sentimental history of the name in her family. Her Bob Stump lost the Republican primary, and didn’t return our requests to speak about his experience.