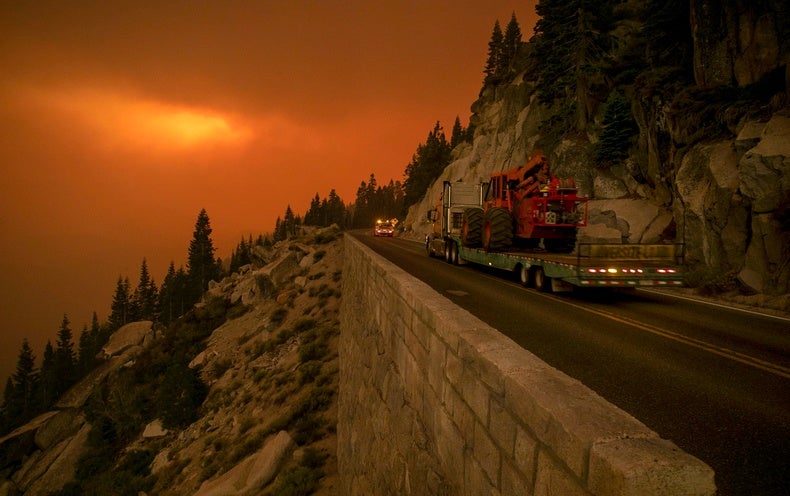 Californians have long thought of the Sierra Nevada mountains as a “granite wall” that wildfires couldn’t breach. But this summer’s searing heat and dry conditions, exacerbated by climate change, finally let two blazes scale and cross the jagged, rocky peaks for the first time in the state’s recorded history.

This grim milestone underscores just how much the climate has shifted over the past century as humans have extracted and burned fossil fuels—and how wildfires will pose new challenges to firefighters and communities struggling to adapt. “In many ways, it becomes yet another sign of how climate change is fundamentally altering our ecosystems and wildfire activity,” says Crystal Kolden, a pyrogeographer at the University of California, Merced.

The Sierra Nevada’s highest slopes have historically been less hospitable to conflagrations than the lower parts of the mountain range, which runs down the length of California. The sparseness of trees and other vegetation near the peaks means that when fires do start in, or move to, those elevations, “they don’t get very big, and they run out of fuel,” Kolden says. For example, in the Tahoe area on the east side of the range, she adds, “people … tend to think of [the Sierra Nevada] as ‘the granite wall’” and assume fire cannot cross over from the west. Kolden says she thought that as well until the Caldor Fire raged across the peaks and threatened South Lake Tahoe, Calif., at the end of August. (The Dixie Fire burned over the summits of the northern Sierra to the northeast of the city of Chico, Calif., earlier that month.)

In contrast with other trees found in the West, those growing high up in the Sierras lack traits that suggest they evolved in a place prone to severe fires. Ponderosa pines and other lower-elevation trees tend to have thick bark that helps them withstand such blazes. Trees closer to the peaks have thinner bark, says Craig Clements, director of the Wildfire Interdisciplinary Research Center at San José State University. He notes that some higher-elevation trees in the Sierras lack the kind of cones that need fire to open and release their seeds. These trees can, however, be found in trees growing higher up in the Rocky Mountains.

Conditions at high elevations also tend to be generally cooler and wetter than in lower areas. In past decades, it was not uncommon for the Sierras’ winter snowpack to hang around well into July and keep soils moist as late as August, Kolden says.

But climate change is altering that background and making high areas more vulnerable to encroaching flames. Warmer winters mean more precipitation falls as rain, which does not keep things damp as long as snow does. Warmer springs and summers can cause what snowpack there is to melt much earlier, leaving vegetation parched and primed to ignite. “This year [the snowpack] was all gone in May,” Clements says. California’s hottest summer in 127 years supercharged the dry conditions, making them even worse than they were during last year’s record-breaking fire season.

Rising temperatures are changing the ecology of the higher elevations in other ways as well, with the tree line gradually moving upward wherever there is enough soil to take root. This brings more and denser potential fuel for fires, Kolden says.

A 2015 Ecosphere study found that fires have been happening more frequently in the Sierra Nevada since the late 20th century and that they have been steadily creeping upward. The authors proposed that both climate change and a shift away from fire suppression by firefighting agencies could be behind these trends.

Much of the concern over rising fire risks in these areas is for the homes and businesses of people living there. “There is really a risk to these communities that have not seen a lot of fire at these elevations,” Kolden says. “Now it’s something that they have to worry about.”