How China Embraces Russian Propaganda and Its Version of the War 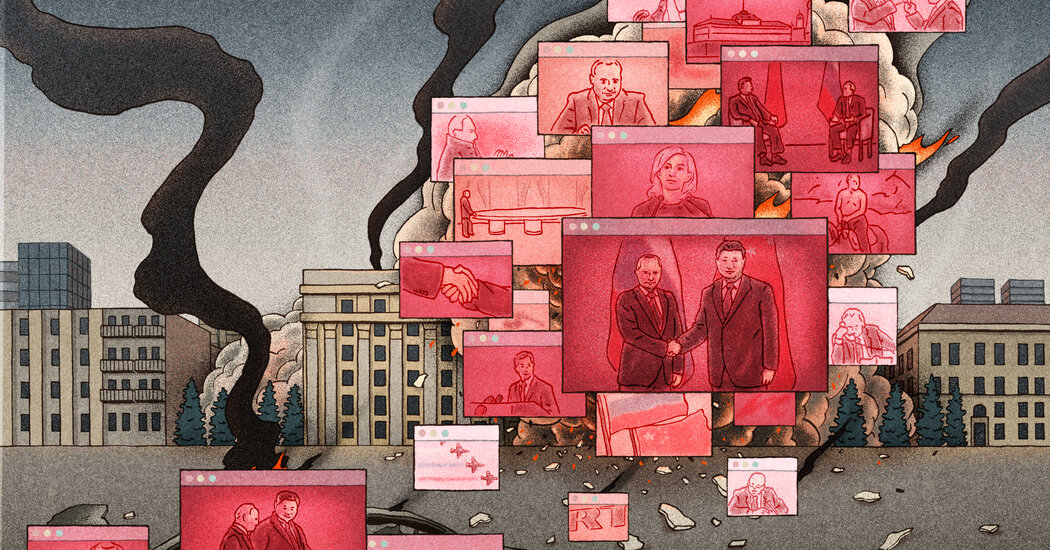 Hours after Russia invaded Ukraine on Feb. 24, the Chinese Communist Party tabloid, Global Times, posted a video saying that a large number of Ukrainian soldiers had laid down their arms. Its source: the Russian state-controlled television network, RT.

On Feb. 28, as Russia became an international pariah, the Russian state-owned news agency Sputnik shared a message of strength with its 11 million Weibo followers. The Russian foreign ministry spokeswoman, Sputnik said, said Russia still had friends in the world, especially “a real giant” like China.

“Add oil, Russia,” Sputnik’s Weibo follower @fengyiqing cheered on, using a Chinese expression of support. “All the people in the world who love justice are friends of Russia.”

As European and American officials press Facebook, Twitter, TikTok and other online platforms to clamp down on Russian disinformation, China has embraced Russia’s propaganda and lies about the war. China’s state-owned media outlets quoted their Russian counterparts’ coverage without verification, helping to magnify their disinformation on the Chinese internet. They put Russian officials on state television networks with little pushback on their claims.

When it comes to information, the Chinese government is a control freak, dictating and censoring what its 1.4 billion people consume. Beijing has silenced and jailed its critics and journalists. It has coerced and co-opted the biggest Chinese online platforms to enforce its censorship guidelines. It blocks nearly all major western news and information websites, including Google, Twitter, YouTube, Wikipedia, The New York Times, The Wall Street Journal and the BBC.

Yet as the world faces one of its most serious geopolitical crises since the end of the Cold War, China let down its digital defenses and allowed Kremlin’s propaganda machine to help shape public perception of the war. No wonder the Chinese internet is overwhelmingly pro-Russia, pro-war and pro-Putin.

If China wants to remain officially ambiguous about whether it supports Vladimir V. Putin’s war — refusing to call it an invasion and abstaining from a U.N. vote to condemn the invasion — its state-controlled media nonetheless makes very clear where China stands.

The China-Russia information alliance is forged over a shared worldview of two leaders, Xi Jinping and Vladimir V. Putin, who, out of deep distrust of the United States, are determined to challenge the West’s dominance in the competition for public opinion.

In a 2013 speech, Mr. Xi urged the country’s propaganda workers to enhance the country’s “international discourse power” under the notion of “telling China’s story well.” During a visit to RT’s headquarters in the same year, Mr. Putin said the network was created to “break the Anglo-Saxon monopoly on the global information streams.”

In 2015, Mr. Xi and Mr. Putin decided the two countries should strengthen their cooperation in media. Since then, they’ve held a Sino-Russian media forum each year, aiming to “redefine the map of the international discourse.”

Last November, a RT executive said at the forum that major Chinese media outlets quoted RT.com on average 2,500 times a week in 2021.

Many Chinese media organizations admire RT and Sputnik, which they believe have broken the West’s information monopoly, or at least muddied the water. Many media experts have analyzed what China’s state-owned media could learn from their successes. One academic paper detailed RT’s coverage of Russia’s annexation of Crimea in 2014 to illustrate how the Russian network carefully planned its reporting strategy to increase its seeming credibility and accessibility so it could set its own agenda.

When Russia invaded Ukraine, Kremlin’s media machines worked well in China. Combined with Beijing’s censorship of pro-Ukraine content, they wove a web of disinformation that proved difficult for most Chinese online users to escape.

The message they are trying to drive home: Russia’s military actions are anti-West, anti-NATO expansion and anti-Nazi — thus justified and popular.

In China’s state media, there’s very little about the international condemnation of Russia; Ukraine’s success in the battle for public opinion, led by President Zelensky; or antiwar protests in Russia.

The one-two punch is working, keeping the Chinese public from facts while sowing confusion.

On the Chinese social media platforms, many people adopted Mr. Putin’s and Russian media’s language, calling the Ukrainian side extremists and neo-Nazis.

They kept bringing up the Azov Battalion as if it represented all of Ukraine. The battalion, a unit of the Ukrainian National Guard, is known for having neo-Nazi sympathizers but remains a fringe presence in the country and its military.

President Zelensky himself is Jewish and won the presidential election in 2019 with 73 percent of the votes. His approval rate soared to over 90 percent recently for his wartime leadership.

The Russia-Ukraine War and the Global Economy

Gas supplies. Europe gets nearly 40 percent of its natural gas from Russia, and it is likely to be walloped with higher heating bills. Natural gas reserves are running low, and European leaders have accused Russia’s president, Vladimir V. Putin, of reducing supplies to gain a political edge.

Shortages of essential metals. The price of palladium, used in automotive exhaust systems and mobile phones, has been soaring amid fears that Russia, the world’s largest exporter of the metal, could be cut off from global markets. The price of nickel, another key Russian export, has also been rising.

Financial turmoil. Global banks are bracing for the effects of sanctions intended to restrict Russia’s access to foreign capital and limit its ability to process payments in dollars, euros and other currencies crucial for trade. Banks are also on alert for retaliatory cyberattacks by Russia.

The fog of disinformation thickens when Chinese state media portrays Russia’s war as an anti-fascism effort. After Russia’s defense minister announced this week that his country would host the first international anti-fascism conference in August, the CCTV posted a one-paragraph story, then created a Weibo hashtag. Within 24 hours, it had 650 million views and was used by 90 media outlets. Many commenters called Ukraine and the United States fascist countries.

Chinese media is also propagating Russian disinformation that Ukraine has been using civilians as human shields. In its prime-time news program on Feb. 26, CCTV quoted President Putin as making that allegation. A few days later the nationalistic news site, guancha.com, ran a banner headline that said the Russian military was going only after military targets, while the Ukrainian military was using civilians as human shields.

Taken collectively, Chinese online users are seeing a quite different war from much of the world.

While videos circulated outside China purportedly showing Ukrainians’ kind treatment of Russian prisoners of war, the trending social media topic in China was that captured Russians had endured Nazi-like torture. Both CCTV and the People’s Daily, the official newspaper of the Communist Party, created hashtags echoing the same, based on a briefing by the Russian defense ministry. They had combined views of more than 200 million.

Sputnik, with 11.6 million followers on Weibo, has been posting more than 100 items a day lately, populating its timeline with words like “criminal Zelensky,” “empire of lies,” “fake news” and “Nazi.”

“We must stand with Russia!” Weibo user @qingdaoxiaowangzi commented on one of Sputnik’s posts, using a popular line on the Chinese internet. “If Russia falls, NATO and the neo-Nazi United States will bully China!”

At the same time, Weibo and other platforms are censoring pro-Ukraine content. The Weibo account of the actor Ke Lan, which has 2.9 million followers, was suspended after she retweeted a video and a photo about an antiwar protest in Russia with the emoticon 🌹. So was the account of a transgender celebrity, Jin Xing, with 13.6 million followers. “Respect all lives and resolutely oppose the war!!!” her last post said.

But as the war continues and China recalibrates its position, some Chinese online users have begun to scrutinize the Russian news media reports. Under a Sputnik Weibo post contending that the Ukrainian military murdered civilians, a user with the handle @jialalabadededashen wrote, “Is this another news item that was tailor made by the Russian news agency for China?”

In a social media discussion, some people called out Russia for waging an information war in China. “Russia’s external propaganda has infiltrated China out-and-out,” wrote a Weibo user called @juediqiangshou. “That’s why all the excuses to justify the invasion are popular here.”

Some people are also raising questions about whether the flood of pro-Russia information would be detrimental to the interests of China and its people.

Even Wang Xiaodong, a famous nationalist writer, suggested on Weibo that the Russia-Ukraine war was more complicated than it seemed. “The Chinese people should have access to comprehensive and diversified information,” he wrote on Wednesday.