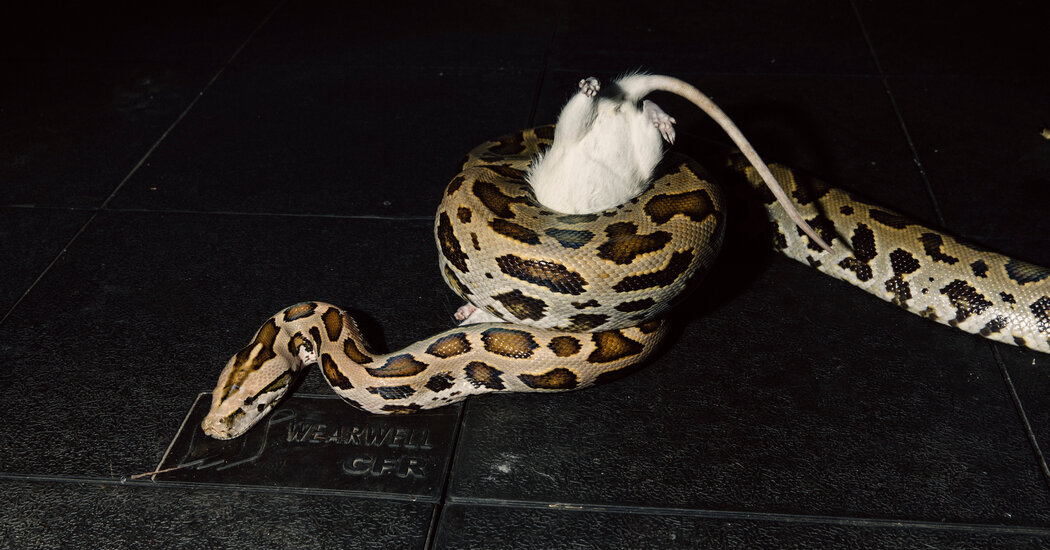 The boa constrictor got its name for a reason. To kill its prey, a boa will coil around it, squeezing hard enough to stop the prey’s blood from flowing, and then, stretching its jaws open, devour it whole. They are known to eat opossums and rats. Some of their larger relatives, anacondas, can eat capybara and deer, and there have been some instances of pythons eating people.

But constricting and ingesting prey is no small — or quick — feat. “They do this for 10, 15, up to 45 minutes,” said Elizabeth Brainerd, an evolutionary biologist at Brown University. “And that takes quite a bit of energy, so they have to be breathing.”

Dr. Brainerd and her colleagues set out to understand how boa constrictors breathe under such cramped conditions and discovered that they’re able to precisely shift the region of their rib cage that expands to draw air into their lungs. Their work was published on Thursday in the Journal of Experimental Biology. Their findings shed light on the anatomy of snakes and how these slithering predators have come to thrive in so many parts of the world.

“Large prey ingestion really opened up all these new avenues for snakes to evolve that otherwise would not have been possible,” said John Capano, an evolutionary biologist at Brown University and an author of the study.

Looking out across the tree of vertebrate life shows that taking in and releasing air is more complex than it seems.

“Breathing is one of those things that seems super simple,” said Allison Hsiang, a computational paleobiologist at Stockholm University who was not involved in the study. “But if we’re looking at all the major vertebrate groups, we basically all breathe using completely different systems.”

Humans, for instance, have a diaphragm, while birds use air sacs. But snakes are fully dependent on their rib cage and, in addition, have large, long physiques that sit behind a comparatively minuscule head and require a lot of food to maintain.

“Basically snakes are all ribs,” Dr. Brainerd said. To breathe, the animals slowly expand a section of their rib cage, which creates a pressure change that pulls air in.

While they’re squeezing, those ribs are compressed. Ingesting prey also expands ribs to their limit. Exactly how boas could breathe while constricting or ingesting remained a mystery.

“Something had to happen with the evolution of their lung ventilation system in order for them to become these elongated, small-headed animals that eat big meals,” Dr. Brainerd said.

Based on previous observations in the field, scientists had theorized that, when constricting and ingesting prey, snakes are most likely changing the specific region of their rib cage that’s expanding. But another option would be that they use any uncompressed area of their rib cage to draw air into their lungs.

To test these hypotheses, the research group visualized a boa constrictor’s rib cage during constriction using 3-D X-ray technology. With the snakes anesthetized, the team implanted metal markers no bigger than half a millimeter in the ribs and vertebrae they wanted to image. Then they filmed these regions with X-ray video and, using a blood pressure cuff, restricted rib motion in specific regions, simulating what happens in nature when these snakes constrict their prey.

When resting, boa constrictors breathe using ribs near the upper third of their lungs. But when the blood pressure cuff was wrapped around those ribs, a specific set of ribs further down the snake’s body began expanding to draw in air. “The snake just turns off a section of the rib cage and then turns on another section,” said Dr. Capano, who added that as soon as the cuff was removed, the ribs used to breathe during rest immediately re-engaged.

The team believes that this ability to modulate rib engagement emerged while or before snakes evolved the ability to constrict, and perhaps ahead of a snake’s ability to eat large prey. Without this breathing adaptation, they say, snakes may not have become such a diverse class of reptiles spread out across the globe.