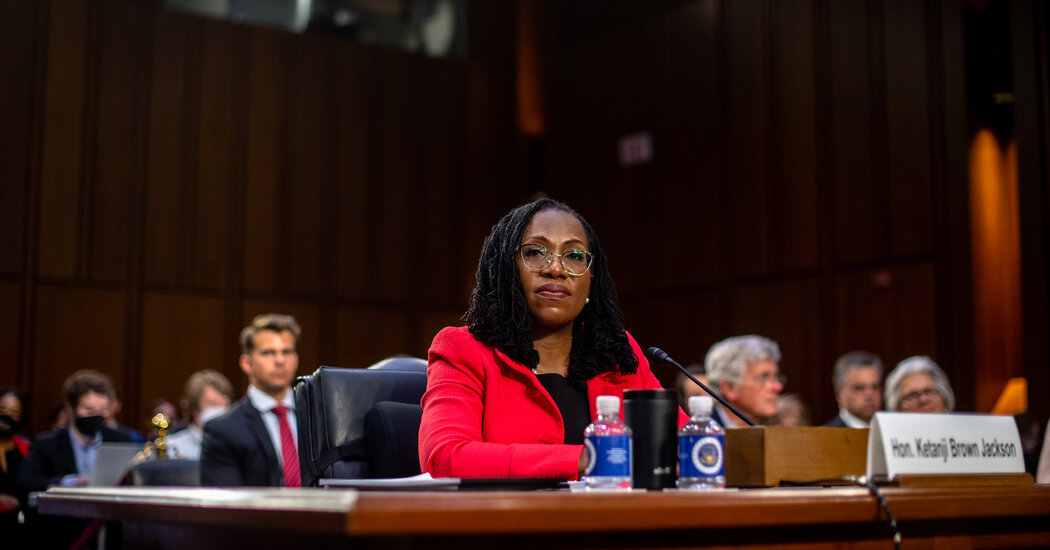 Jordan Simpson, a 25-year-old aspiring lawyer in Valdosta, Ga., was excited to watch the Senate confirmation hearing for Judge Ketanji Brown Jackson, until Senator Ted Cruz’s line of questioning made her feel something else: discouraged.

The treatment of Judge Jackson in the hearing reminded Fentrice Driskell, a Democrat and a Florida state representative, of how white male students interrupted her, and rarely gave her the benefit of the doubt, when she was elected the first Black student government president of Harvard College.

Andra Gillespie, a professor at Emory University who studies race and politics, fielded a phone call from her mother, who said that the political spectacle had made her so upset that she was going to seek solace in church.

For Black women in America, feelings of pride and hope over Judge Jackson’s nomination to the Supreme Court overlapped with pain and disgust as Republicans in the Senate Judiciary Committee questioned her this week on critical race theory and gender identity, and claimed that she was lenient toward people charged with possessing child sexual abuse imagery.

Many of the questions from some corners of the Republican Party were born of conspiracy theories and appeared to appeal to the party’s hard-right base. And judicial confirmation hearings have often devolved into political theater that has little to do with the law.

Despite Republican promises of a respectful approach, Judge Jackson, the first Black woman nominated to the Supreme Court, had to absorb Republicans’ bitterness over the stiff resistance their party’s last few nominees have faced, the mocking and aggressive tone some took in questioning her, and their characterization of her as an extremist on race.

In the hearing’s stinging exchanges, some Black women said they saw the same hardly veiled discrimination that they have experienced at times in their personal and professional lives. They also recognized Judge Jackson’s response: the same steely endurance that they have tried to display through gritted teeth, even when under far less intense public scrutiny.

“Every sigh, every time her jaw tightens, every time her eyebrow raises a certain way,” said Jazzi McGilbert, 33, the owner and founder of Reparations Club, a concept bookstore and creative space in Los Angeles. “Every Black woman speaks that language.”

In a dozen interviews, Black women around the country recounted the emotional highs of witnessing Judge Jackson’s history-making nomination and lows of listening to Republican senators who had initially promised to treat her with fairness and respect.

“When I was on the Senate Judiciary Committee, we did not ask that many questions about crime,” said Carol Moseley Braun, who represented Illinois in the Senate from 1993 to 1999 as a Democrat and was the first Black woman elected to the chamber. “So why are you singling this woman out? Is it because of her color? Because of her race?”

Judge Jackson’s composure inspired many of the women, who said they might not have been able to show similar restraint through days of such aggressive questioning.

“The way she was able to sit there, listen and be grilled, interrupted, over and over and over again on things that we know have no bearing on what Supreme Court justices do impressed me so much,” said Lynn Whitfield, 67, of West Palm Beach, Fla., who has been a lawyer for more than 40 years. “We all know that feeling of having to sit there with a smile on your face and be nice.”

That Judge Jackson, 51, was forced to display graciousness or risk being further attacked for losing her temper struck some women as deeply unfair.

“Some of those folks deserved an upbraiding,” said Dr. Gillespie, 44, the Emory professor.

She said she kept recalling the confirmation hearings for Justice Brett M. Kavanaugh, whose anger was lampooned by the actor Matt Damon on “Saturday Night Live.” (“I’m going to start at an 11,” Mr. Damon’s character said. “I’m going to take it to about a 15 real quick.”)

“Brett Kavanaugh was allowed to do that, to show his righteous indignation,” Dr. Gillespie continued. “But if Ketanji Brown Jackson had done that, we’d be talking about the angry Black woman being temperamentally unfit.”

Some women avoided watching the hearings live, to maintain a distance from the political vitriol that they figured was inevitable.

As Judge Jackson was being questioned, Chanda Prescod-Weinstein, a professor of physics and a core faculty member in gender and women’s studies at the University of New Hampshire, was “doing simulations of dark matter and galaxies,” preferring to stay focused on her work as a scientist and educator.

“We’re watching someone in the international spotlight being asked to carry the hopes and dreams of the entire community,” Dr. Prescod-Weinstein said of Judge Jackson. “All of us, all the time, are feeling that kind of pressure.”

Nia Jolly, a second-year law student at the University of Louisville who was recently elected the first Black woman to be president of her school’s student bar association, said that to preserve her own well-being, she only watched part of the hearings.

“Seeing this woman, who is more than qualified, being put through the wringer and having to explain herself in a way that her counterparts don’t was egregious,” said Ms. Jolly, 25.

One bright moment that touched several women was hearing Senator Cory Booker, Democrat of New Jersey, tell Judge Jackson: “You have earned this spot. You are worthy.”

“I’m grateful that Ketanji Brown Jackson is a dark-skinned Black woman with natural hair — that means something — and that she has her daughter with her in the hearings,” said Melina Abdullah, a professor of Pan-African studies at California State University, Los Angeles, and a co-founder of the city’s chapter of Black Lives Matter.

Yet Ms. Driskell, the Florida legislator, said it was difficult not to worry about the country’s long-term future when Supreme Court hearings become so politically charged.

“If America as a country does not course-correct, this is a harbinger of bad things to come,” said Ms. Driskell, who is 43 and a lawyer. “Because the end result will be the undermining of public faith and confidence in the judicial system.”

That is in part why the Supreme Court needs Judge Jackson, said Denise Lewin Loyd, a childhood friend of Judge Jackson who is an associate dean and business professor at the University of Illinois at Urbana-Champaign, where she studies how diversity affects the performance of small teams.

The hearings reminded Dr. Loyd of how her own credentials were questioned when she applied for a job in the construction industry in Boston after earning a master’s degree from M.I.T. The interviewer, a white man, asked her what her grade-point average had been as an undergraduate, a question she found baffling after having earned an advanced degree from one of the nation’s top universities.

“The rarity of you in certain spaces exacerbates this question of, ‘How did you get here?’” she said.

It is precisely that perspective — from being a Black woman, from having been a federal public defender, from having served on the United States Sentencing Commission — that would make Judge Jackson an asset to the other justices, Dr. Loyd said.

“She will add so much value to the court because of this,” she said. “I’m thrilled.”