How Arizona’s Ballot Audit Is A Disinformation Exercise – NPR 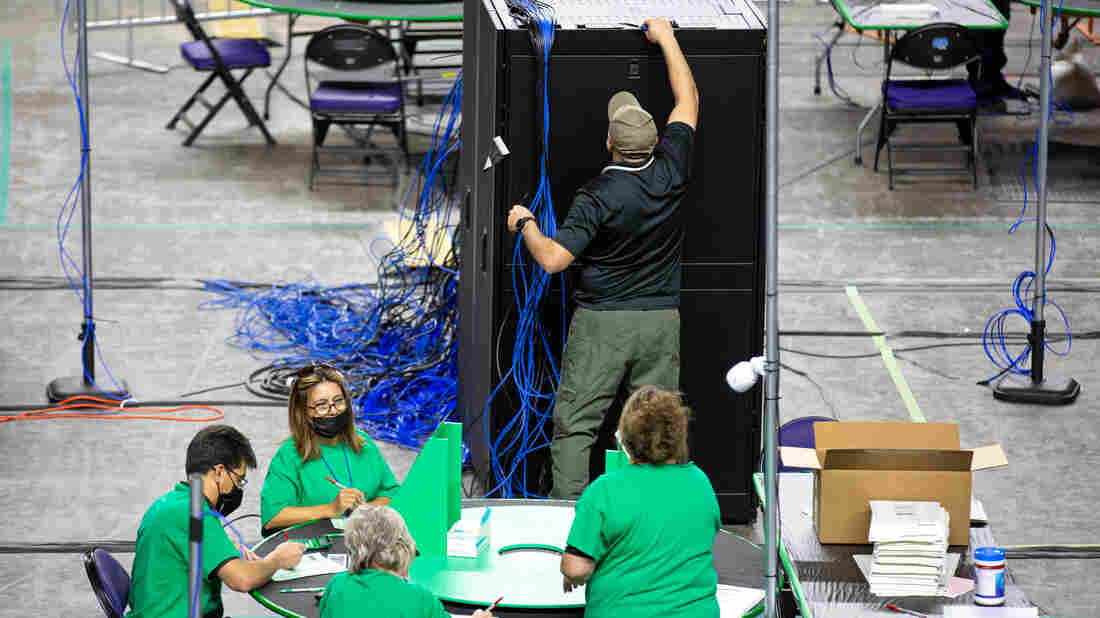 Contractors working for Cyber Ninjas, the company hired by the Republican-led Arizona state Senate, examine and recount ballots from the 2020 general election on May 3. Courtney Pedroza/The Washington Post via Getty Images hide caption 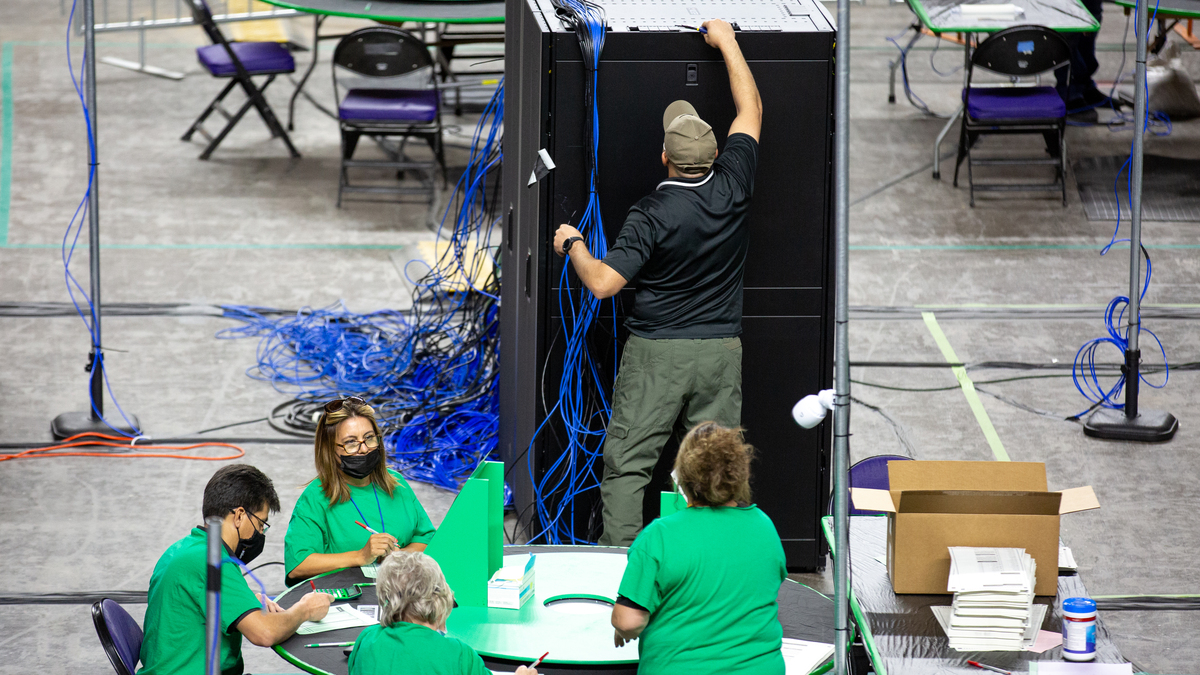 Contractors working for Cyber Ninjas, the company hired by the Republican-led Arizona state Senate, examine and recount ballots from the 2020 general election on May 3.

To Matt Masterson, the review of 2020 ballots from Maricopa County, Ariz., that’s currently underway is “performance art” or “a clown show,” and definitely “a waste of taxpayer money.”

But it’s not an audit.

“It’s an audit in name only,” says Masterson, a former Department of Homeland Security official who helped lead the federal government’s election security preparations leading up to November’s election. “It’s a threat to the overall confidence of democracy, all in pursuit of continuing a narrative that we know to be a lie.”

By lie, he means the assertion from former President Donald Trump and some of his allies that election fraud cost him a second term in the White House.

And, Masterson says, the strategy chosen by the state’s Republican state Senate leaders is working as intended to undermine confidence in the outcome of last year’s vote.

The process is a simple exercise in how disinformation spreads and takes hold in 2021. And experts fear it presents a blueprint for other states and lawmakers to follow, one that is already showing signs of being emulated around the country.

“Now we have a playbook out there,” said Masterson, who is currently a policy fellow with the Stanford Internet Observatory. “Where if you don’t like the results — by the way in an election that wasn’t particularly close … you just claim you didn’t lose and in fact the process itself was rigged against you.”

At a basic level, it’s a victory for those looking to sow doubt in the 2020 election results just to have them still being litigated six months after Election Day.

To be clear, Maricopa County’s election results have already been audited multiple times by companies with experience in the field, with no issues being uncovered.

This latest process however is being run by a company without election experience that’s led by a CEO who has spread election-related conspiracy theories.

Actual election audits have consistent and transparent procedures, often established in state law, but this has none of that, says Jennifer Morrell, a former election official and a national expert on election auditing. Morrell observed the process in person in Arizona for a week.

“They were sort of making up the process,” Morrell said. “They were improvising as they went along.”

Vote counters used conveyer wheels to tally ballots, often having to grab the wheel to stop it from moving too quickly past them. Other volunteers did data entry into a spreadsheet with no quality control checks in place to make sure they entered it correctly. Observers from the Arizona Secretary of State’s office have documented a series of ” problematic practices, changing policies, and security threats that have plagued this exercise from the start.”

In short, it’s been an unreliable mess. And Morrell says she’s sure whatever count the “auditors” come up with won’t match the official tally.

But by calling it an audit, the process gains credibility in the eyes of people who don’t know better, says Francesca Tripodi, an information studies professor at the University of North Carolina. The title itself is a misinformation tactic.

Normally, election audits are mundane, sparsely attended affairs. But this one has its own Twitter account (with 68,000 followers) and a livestream on the pro-Trump One America News Network, which has also raised money on air to fund the audit.

“It’s terrifying,” Morrell said. “We’ve suddenly said it’s OK to hand our ballots over to a third-party organization with political bias, with no experience, who get to make up the rules and then make a decision or a determination based on what they do on whether or not the outcome of the election was correct.”

The only way it works, however, is if people know about it. And if it gets covered in a way that doesn’t note the audit’s technical shortcomings.

That’s where the conservative media ecosystem steps in.

An NPR analysis of social media engagement data from the online analytics firm Newswhip found that the 10 most popular stories about the “audit” on social media were all published by conservative publications, many of which have also pushed the false idea that Trump may be the rightful president.

Newswhip’s engagement data encompasses how many times an article was shared, commented on or liked across Facebook, Pinterest and much of Twitter. The company analyzed a time period from April 1 through May 25 at the request of NPR.

Five of the top 10 most popular links came from WesternJournal.com, a conservative clickbait site that furthers right-wing narratives and conspiracies.

Step 3: Use the doubt to sow more doubt

A recent Fox News poll found that 82% of Trump voters believe that illegal voting is a “major threat” to the stability of the U.S., even though election fraud has never been revealed to be a widespread issue in American politics.

Those fears were surely amplified by Trump’s false rhetoric around election security last year. Now Republican lawmakers are using those fears to to justify major changes to state voting laws, as many officials feared they would.

“I don’t know what’s legit, what isn’t legit, but why wouldn’t we want to answer those questions?” Karen Fann, the president of the Arizona state Senate who initiated the review of Maricopa County’s results, said in an interview last week with CNN.

In some states, that may mean clamping down on voter access, to chase a fraud bogeyman that doesn’t exist.

In others, it may mean more of these sorts of “audits.”

Three Republican state lawmakers from Pennsylvania visited the site of the Arizona recount Wednesday to observe the process.

State Sen. Doug Mastriano was among them, and while he declined interview requests about the visit from the Associated Press, The Wall Street Journal and a local radio station, according to reporter Ali Vetnar, he granted one to OANN.

There’s a legit local pool reporter in the Coliseum, @Ali_Vetnar, who’s being denied an interview with the Pennsylvania lawmakers who came to observe state Senate Republicans’ election review.

Apparently those PA legislators will only talk to OAN and Gateway Pundit. https://t.co/UJ8Tdvzeno

Private “audit” efforts are now sprouting in other swing states too, like Michigan, Georgia and Wisconsin.

“The incentive structure that has been created is one in which so far we’ve seen zero accountability for lying and pushing these narratives,” Masterson, the former DHS official, said. “We don’t see anyone really, truly being held accountable.”