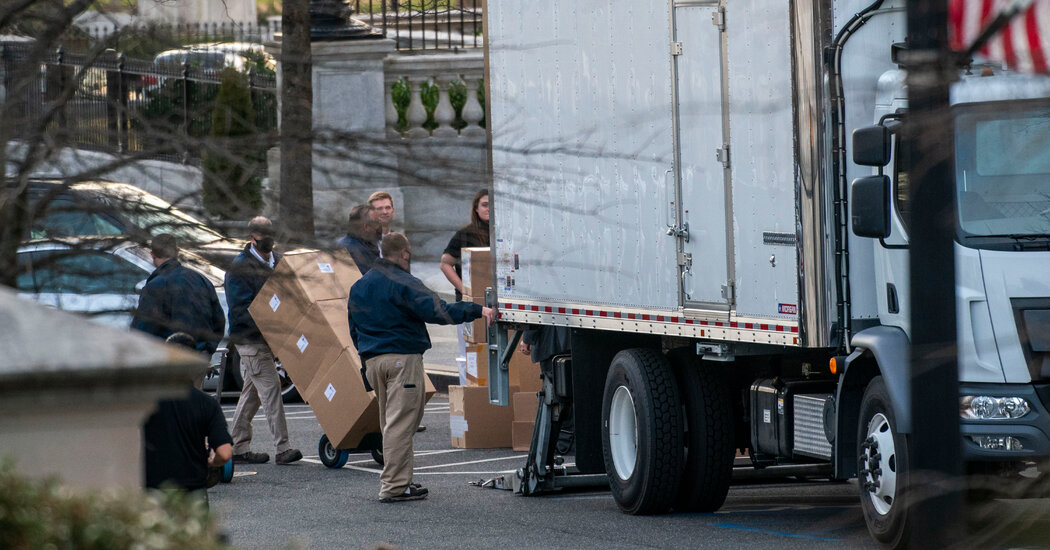 WASHINGTON — A House committee on Friday expanded its investigation into former President Donald J. Trump’s destruction and removal of White House documents, demanding more information about classified material found at Mr. Trump’s property in Florida and reports that aides had discovered documents in a White House toilet during his time in office.

In a letter to the national archivist, Representative Carolyn B. Maloney, Democrat of New York and the chairwoman of the Oversight Committee, said the panel was seeking a detailed description of the contents of 15 boxes recovered from Mar-a-Lago, Mr. Trump’s Palm Beach compound, including their level of classification, and all records that he “had torn up, destroyed, mutilated or attempted to tear up, destroy or mutilate.” She also said the panel wanted documents “relating to White House employees or contractors finding paper in a toilet in the White House, including the White House residence.”

The letter also sought information about the findings of any federal inquiries into the classified material and any communications with Mr. Trump about the Presidential Records Act or White House policies on record-keeping.

“The American people deserve to know the extent of what former President Trump did to hide and destroy federal records and make sure these abuses do not happen again,” Ms. Maloney said in a statement.

The National Archives confirmed in a letter to Ms. Maloney last week that it had found classified information among material that Mr. Trump had taken with him to his home in Florida when he left office last year, and that it had consulted with the Justice Department about the matter.

The archives did not describe the classified material it found other than to say it was “classified national security information.”

The National Archives also said in its letter that the Trump White House had failed to turn over records that included “certain social media records.”

Attorney General Merrick B. Garland declined to say this week whether the Justice Department has opened an investigation into Mr. Trump’s handling of classified information.

“As the archivist said in a letter that was sent to the Congress, the National Archives has informed the Justice Department of this and communicated with it,” Mr. Garland told reporters. “And we will do what we always do under these circumstances — look at the facts and the law and take it from there.”

Mr. Trump’s penchant for tearing up presidential records was revealed in a 2018 Politico article, but in the past few weeks, a series of disclosures has raised new questions about the Trump administration’s failure to follow federal record-keeping laws and its handling of classified information as Mr. Trump left office.

A book scheduled to be released in October by a New York Times reporter revealed how staff members in the White House residence periodically discovered wads of printed paper clogging a toilet, leading them to believe that Mr. Trump had tried to flush them.

In a statement last week, Mr. Trump said that the material had been turned over to the archives as part of “an ordinary and routine process” and suggested that efforts by Democrats to raise questions about his handling of the documents were a scam.

“The fake news is making it seem like me, as the president of the United States, was working in a filing room,” he said.

Ms. Maloney warned in December 2020 that she believed the Trump administration was not complying with the Presidential Records Act. She wrote a letter to Mr. Ferriero expressing what she called “grave concerns” that the departing administration “may not be adequately preserving records and may be disposing of them.”

Ms. Maloney announced this month that she was starting an investigation, after The Washington Post reported that Mr. Trump had been destroying documents and moving boxes to his property in Florida instead of turning them over to the archives.