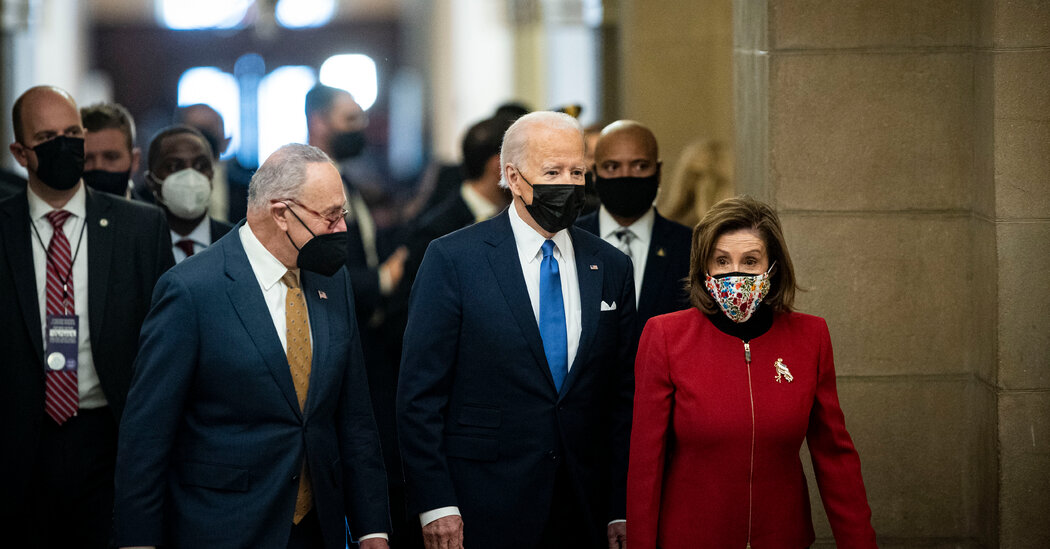 Still, White House aides acknowledge the pressure to revamp their strategy. They have been frustrated by how little credit they have received for enacting major legislation such as the Covid relief bill or bipartisan infrastructure legislation.

“You tell them about the American Rescue Plan, and they say, ‘What the hell are you talking about?’” Mr. Biden, in a burst of candor, said at the House Democratic retreat on Friday, alluding to the $1.9 trillion Covid measure he signed a year ago that is but a dim memory for most voters.

The president’s advisers point to the State of the Union address — which emphasized pragmatism over bold progressive goals — as a blueprint for his message in coming months and note that, according to their research, cutting drug costs was among the most popular proposals in the speech.

They also are considering a handful of executive orders that would please their base, on matters including the cancellation of some student loan debt, and are determined to enact legislation lowering the costs of prescription drugs, according to Democrats familiar with his plans.

Some Democrats say they have been cheered by signs that the White House, and particularly Ron Klain, the chief of staff, are now focused on inflation after initially arguing last year that the increase was transitory. During a recent meeting with a group of House Democrats, Mr. Klain resisted a request to spend more federal dollars aiding restaurants in part because it could be seen as adding to inflationary pressures, according to an official at the meeting.

To the relief of Democrats in Congress, the White House is dropping the “Build back better” catchphrase. The administration is also attempting to pin the blame on President Vladimir V. Putin of Russia for rising gas prices, hoping it will at least dilute Republican attacks over the issue.

Mr. Biden’s midterm priorities aren’t taking a back seat to the war in Ukraine, the White House insists. Senior officials acknowledge that they regret their all-consuming focus on the Afghanistan withdrawal last summer, and as one said, they will not let the West Wing “become a bunker” at the expense of domestic politics.