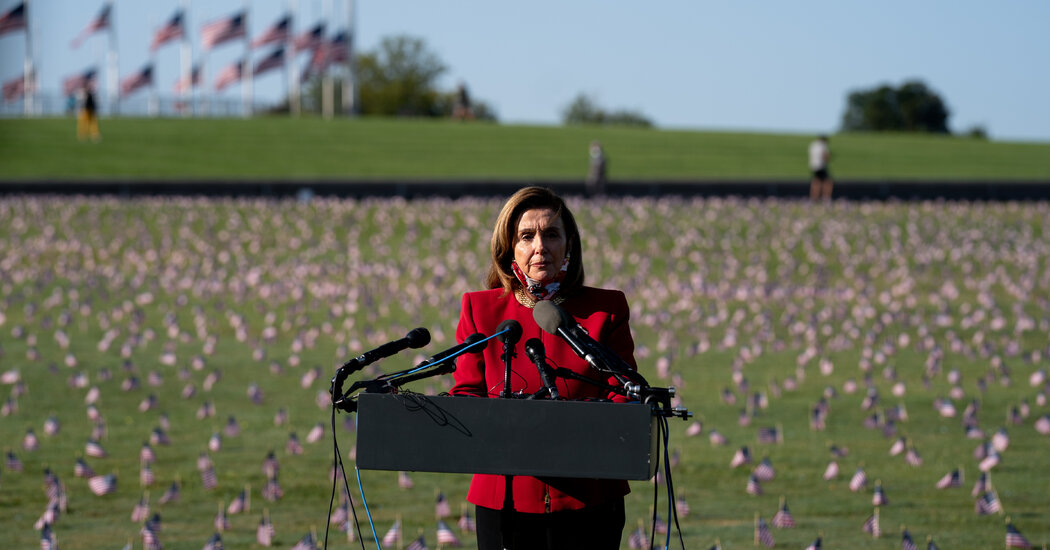 WASHINGTON — The House approved a stopgap spending bill after Democratic congressional leaders and the Trump administration reached a deal on Tuesday to avert a government shutdown next week and extend funding through Dec. 11, agreeing to include tens of billions of dollars in additional relief for struggling farmers and for nutritional assistance.

With Congress unable to reach agreement on the dozen annual spending bills required to keep the government funded when the new fiscal year begins on Oct. 1, the legislation would still need the support of both the Senate and President Trump in order to become law and avoid a shutdown. The House cleared the two-thirds threshold needed to approve the measure, 359 to 57. One Democrat, Representative Alexandria Ocasio-Cortez of New York, voted present.

The measure had been mired in a dispute between Democrats and the White House over Mr. Trump’s demand to include tens of billions to extend the borrowing limit of the Commodity Credit Corporation, which provides loans to farmers and which some Democrats feared Mr. Trump was using as a personal piggy bank to curry favor with a politically crucial bloc of voters and reward other powerful constituencies.

Having failed to strike an agreement on Friday, Speaker Nancy Pelosi of California and Steven Mnuchin, the Treasury secretary, revived negotiations and ultimately agreed to include the agricultural funding with a provision that it could not be used for payments to fossil fuel importers and refiners. They also agreed to include nearly $8 billion in nutrition assistance for school children and families demanded by Ms. Pelosi.

House Democratic leaders had initially sought to advance the bill without the Commodity Credit Corporation money. But lawmakers in both parties balked at the omission, arguing that it was a critical resource for farmers across the country and helped fund a series of bipartisan programs. Moderate Democrats who count farmers and agriculture businesses as significant constituencies within their districts lobbied Ms. Pelosi to reconsider.

“I am deeply frustrated that once again Washington is playing games with the vital aid that Iowa’s farmers need as they continue to struggle with the long-term effects of a public health crisis, an economic downturn, a trade war and recent natural disasters,” said Representative Cindy Axne, Democrat of Iowa, who joined her state’s delegation in calling for the inclusion of the aid.

Ms. Pelosi ultimately agreed while insisting on limitations for the money. In return, Mr. Mnuchin and Republicans accepted nearly $8 billion for nutritional assistance, including a pandemic program that provides assistance to families with children who would have received free or reduced-price lunches at school and an extension of nutrition waivers Congress approved in coronavirus relief legislation this year.

“I’m for this — it was tough to get to,” said Representative Steny H. Hoyer, Democrat of Maryland and the majority leader, referring to the flurry of talks on Tuesday as “a lot of to-and-fro’ing.”

“In a world of alternatives, this is the best we have, so we need to take it and keep the government funded,” he added.

The effort to stave off a shutdown six weeks before Election Day comes as the looming brawl over filling the Supreme Court vacancy left by Justice Ruth Bader Ginsburg’s death has further intensified partisan rancor on Capitol Hill.

Congress will ultimately have to return in a lame-duck session, the period between Election Day and the chamber’s adjournment at the end of the year, and approve the annual must-pass legislation needed to fund the government. Democrats had initially pushed to extend the short term legislation into February, in the hopes that their party would capture the White House and Senate and be able to negotiate more favorable deals under a new president and Congress. But Republicans refused.

Democrats also agreed to exclude provisions that would have provided additional funds for election security and extended critical deadlines for the U.S. census to submit redistricting data.

The measure would prevent furloughs at the United States Citizenship and Immigration Services by allowing the agency, which has seen a loss in revenue in part because of the pandemic, to raise premium processing fees. It would also extend funding for a flood insurance program through next September, as well as funding for a program for highway construction and maintenance.

The bill also included language that would prevent Medicare recipients from seeing a significant increase in their premiums partly because of measures taken by the administration to counter the effects of the pandemic. But it did not include any additional relief to help American families and businesses recover from the toll of the pandemic, despite growing pressure from rank-and-file members for negotiators to break a stalemate on a broader legislative package.

A bipartisan group of lawmakers urged their party leaders on Tuesday to keep the House in session until Congress approved another pandemic relief bill, writing in a letter that “our constituents do not want us home campaigning while businesses continue to shutter.”

“It has been suggested by some that members of Congress are anxious to return to their districts to campaign in advance of the Nov. 3 election, even if that means leaving Capitol Hill without passing another Covid-19 relief bill,” the lawmakers, led by Representative Jared Golden, Democrat of Maine, wrote. “We want to be very clear that we do not in any way agree with this position.”

A handful of moderate Democrats are also considering signing onto a Republican-led effort that would, if it gained the support of 218 lawmakers, force a vote on legislation to revive a popular federal loan program for small businesses, according to a person familiar with the plans, who requested anonymity to disclose details of private discussions.