Hong Kong began a voluntary mass-testing programme for coronavirus on Tuesday, amid calls for its boycott by some pro-democracy activists, as part of a strategy to break the chain of transmission in the city’s third outbreak of the disease.

The testing programme has become the latest political flashpoint in China’s self-governing territory, with many distrustful over resources and staff coming from Beijing, and fears that residents’ DNA could be collected during the exercise.

The Hong Kong government has dismissed such concerns, saying that no personal data will be attached to the specimen bottles and that samples will be destroyed in Hong Kong after the exercise.

According to the South China Morning Post, at least 10,000 people were tested in the first two hours of the programme, including many middle-aged and elderly people. 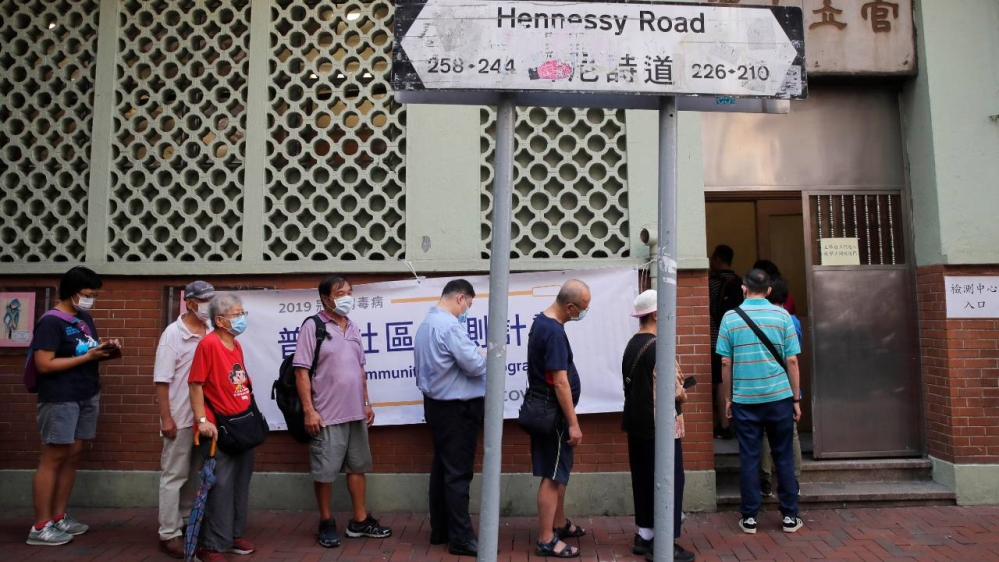 The Hong Kong government said that as, of Monday evening, about 553,000 people had registered for the test.

The government expects 5 million of the city’s 7.5 million residents to take part in the week-long programme, which could be extended to another week if there is demand.

It is aimed at identifying silent carriers of the virus – those without symptoms who could be spreading the disease.

Hong Kong was hit by a sudden surge in cases in early July with the outbreak blamed in part on an exemption from quarantine requirements for airline staff, truck drivers from mainland China and sailors on cargo ships.

At its peak, Hong Kong recorded more than 100 locally transmitted cases a day, after going weeks without any in June.

The outbreak has slowed, with the territory reporting just nine cases on Monday, the first time in two weeks daily infections had fallen to single digits.

However, the government and some experts say community testing will help detect asymptomatic carriers and further slow the spread of the virus.

Respiratory medicine expert David Hui told AP news agency that even though infections have dwindled, the proportion of cases with untraceable sources of infection remain between 30 and 40 percent.

According to Hui, the programme is more effective if most of the population takes part.

“If only 1 or 2 million people take part, then we may not be able to achieve that objective,” he said.

Pro-democracy activist Joshua Wong was among those who urged people to boycott the testing and questioned the accuracy of the tests conducted, citing Swedish reports claiming that the test being used had returned “high rates” of false-positive results.

I called on boycott the tests after cited Swedish reports of high rates of 3700 false-positive results returned by test kits from @TheBgiGroup Genomics, a firm involved in the program, and questioned the accuracy of the testing. https://t.co/9xaCb86yGy

In an interview with Al Jazeera, Jessica Leung of the Civic Party also raised concerns about how data from the tests would be stored, and for how long.

Dr Arisina Ma, from the Hong Kong Public Doctors’ Association, also told Al Jazeera that while she is not against testing, the programme should be focused to make it cost-effective.

“Testing should be targeted to those with symptoms and those with close contact with confirmed cases,” she said.

Meanwhile, Hong Kong is expected to resume face-to-face school classes from September 23 as authorities wind back strict coronavirus restrictions, which have kept about 900,000 students working at home for more than four months.

The city’s government had said at the start of August that face-to-face classes would be suspended indefinitely.

But more than two-thirds of parents, regardless of income level, believe their children have difficulty learning at home, according to a February survey by the Education University of Hong Kong.

A survey by The Society for Community Organisation (SoCO) of nearly 600 low-income students showed more than 70 percent did not have computers and 28 percent had no broadband internet at home.