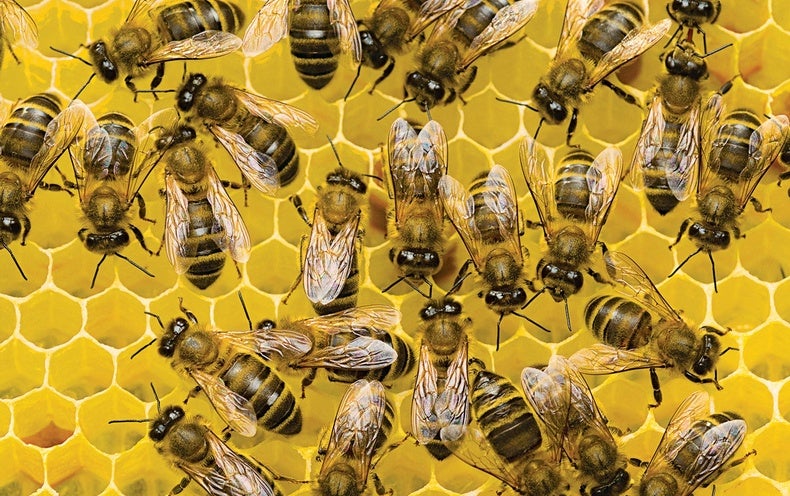 Humans are not the only animals that practice social distancing to deal with a deadly pathogen: A new study shows honeybees change their behavior and use of space to avoid spreading Varroa destructor mites, which feed on bees’ organs and can harbor nasty viruses. Researchers observed these changes in wild and caged bees infected with the mites, which are one of the biggest global threats to honeybees.

The team found that in the infected wild populations, older forager bees would perform foraging dances—which they use to show other bees where to find food—near the periphery of the hive. These actions seemed intended to avoid sickening the young nurse bees and larvae in the hive’s center. The infected wild bees also groomed one another for parasites more intensely in the center of the hive, among the more valuable young bees. The findings were reported in Science Advances.

“We interpreted this change in the social organization as a possible strategy to limit the spread of the parasite within the hive,” says lead study author Michelina Pusceddu, an agricultural scientist at the University of Sassari in Italy.

As predicted, the infected bees in cages received more grooming than uninfected bees. But contrary to expectations, the infected bees engaged in more socializing as well, such as touching antennae and sharing regurgitated food. This may reflect a trade-off between limiting disease spread and maintaining communication, the authors say. “Probably social distancing is too costly at a small scale or within the same cohort,” notes senior study author Alberto Satta, also at the University of Sassari.

The study provides an example of how “we can find evidence for really complicated behavioral changes that [social animals] have—like the social distancing phenomenon—to deal with the special challenges of living in a big social group,” says Adam Dolezal, an entomologist at the University of Illinois at Urbana-Champaign, who was not involved with the new study. Dolezal’s own research has shown that honeybees reduce their contact with bees infected with a pathogen called Israeli acute paralysis virus, which the insects can detect by smell.