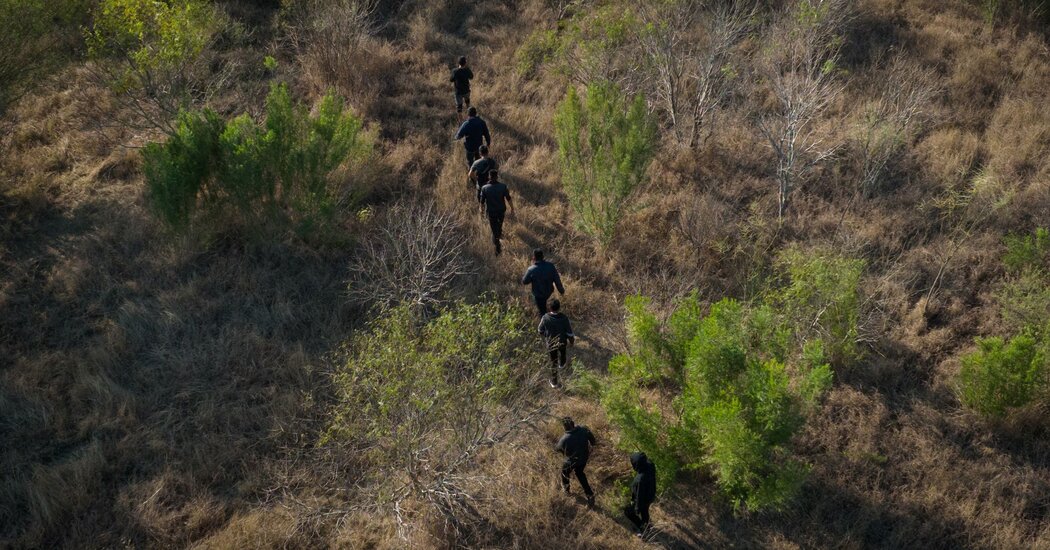 WASHINGTON — Crossings at the southwest border have been peaking again in recent weeks, and homeland security officials are bracing for those numbers to rise much higher if the Biden administration decides to lift a public health order that has limited immigration during the pandemic.

A decision about the order, put in place by the Trump administration two years ago this month, could come as early as Wednesday, when the Centers for Disease Control and Prevention may decide whether to renew it for another 60 days.

Homeland security officials on Tuesday described contingency plans for managing as many as 18,000 encounters a day at the border, regardless of the cause. Working with the Federal Emergency Management Agency, other federal agencies, and state and local officials, the department is prepared to have on standby additional personnel, transportation and medical assistance, and temporary facilities for processing migrants.

The stakes are high, from both a humanitarian standpoint and a political one. Democrats do not want the southwest border to appear out of control in the months ahead of the midterm elections, which would fuel more Republican attacks on the Biden administration’s border policies.

The administration was caught somewhat flat-footed last September when thousands of migrants crossed the Rio Grande en masse into Del Rio, Texas, and were forced to crowd under a bridge for days until they could be processed by border officials. It is that kind of situation that officials are seeking to avoid.

There has long been concern that lifting the public health order, which gives border officials the authority to quickly expel migrants, including those seeking asylum, will open a floodgate of illegal migration. Some administration officials, under pressure from immigration advocates, had hoped the order, known as Title 42, could be lifted when seasonal migration trends decreased — but that never really happened.

Since October, border officials have apprehended 900,000 undocumented migrants at the southwest border, the Homeland Security Department said on Tuesday. During the 2021 fiscal year, undocumented migrants were caught a record-breaking 1.7 million times. The number of illegal crossings went up significantly after President Biden took office compared with the previous year, when numbers were down, in part because of the pandemic.

The Biden administration has defended the continued use of the order, citing the C.D.C.’s assessment that lifting it would pose a public health threat during the pandemic. Public health experts have long said the argument was specious, and the government has never provided scientific evidence that limiting illegal migration at the southwest border helped curb the spread of Covid-19.

Instead, critics say, the public health order has been used as an immigration control tool.

Human Rights First, a national advocacy group, recently released a report that found that expulsions at the southwest border under the public health order had led to nearly 10,000 reports of violent attacks on migrants, including kidnapping, torture and rape.

Julia Neusner, a lawyer with Human Rights First, said if the order was lifted, the group would be sending lawyers and researchers to the border “to monitor whether the policy is actually ended for asylum seekers of all races and nationalities, and to identify improvements to make sure our system actually welcomes people seeking refuge.”

Nonprofit organizations that help migrants who are released into the country by border officials are also preparing for an increase in crossings.

There have been 1.7 million expulsions under the public health order. Traci Feit Love, the executive director of Project Corazon, a nonprofit that helps asylum seekers who cross the border in the Rio Grande Valley of Texas, said this meant a significant number of refugees were waiting outside the United States until they could make an asylum claim.

In the past, Project Corazon has tapped into a network of pro bono lawyers to assist its staff attorneys with cases. “We will have to marshal the resources required to ensure every person is given the guidance and support they deserve,” she said.

On Tuesday, when two homeland security officials spoke to reporters on background about the preparations for increased migration, they did not mention any concerns about migrants spreading Covid-19.

The administration this week started vaccinating undocumented migrants at the southwest border who are not expelled under the public health order. It has allowed thousands of migrant children, families and even single adults into the country, despite the order, for humanitarian reasons and because of limited detention capacity.

In September, border officials allowed many of the families who arrived in Del Rio to enter the country to face deportation proceedings for humanitarian reasons, but they also expelled thousands on flights back to Haiti, where political upheaval and violence have led to extremely difficult living conditions.

Over the last three months, there was a 300 percent increase in undocumented Cubans caught crossing the southwest border, according to internal data shared with The New York Times. There have also been large numbers of Venezuelans and Nicaraguans arriving.

But the United States cannot put Cubans, Venezuelans or Nicaraguans on flights back to their countries because of a lack of diplomatic relations. One of the homeland security officials speaking on background on Tuesday called the situation “problematic,” and said they were most likely fleeing oppressive governments.

As a result, thousands of undocumented migrants from those countries have been allowed into the country, given a monitoring device and told to report to Immigration and Customs Enforcement to finish paperwork so that they can face deportation proceedings, a process that takes years because of the immigration court case backlog.

One homeland security official also said many migrants had been placed in “expedited removal” proceedings, which is a fast track to deportation for migrants who do not express a fear of returning to their country. Separately, some asylum-seeking migrants are being routed into a program where they wait in Mexico until an immigration judge makes a decision on their case.