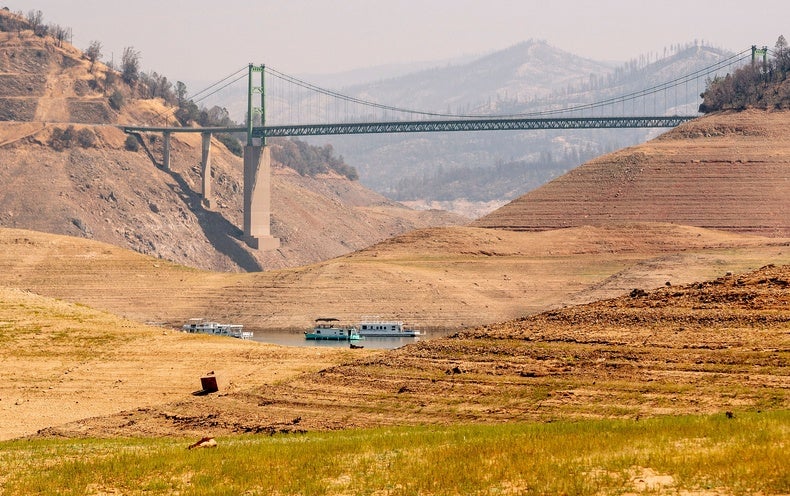 High temperatures and below-average precipitation that have spread drought across the western United States are likely to continue for another year, according to new estimates from the National Weather Service’s Climate Prediction Center.

Forecasts reaching to December 2022 show above-average temperatures across the southern United States and below-normal precipitation in California and Nevada, which have been parched by drought all year.

“We’re in the midst of a historical drought,” climate researcher John Abatzoglou said yesterday at a virtual NOAA conference on drought conditions in California and Nevada. “This is quite a situation we’re in.”

All of California has been in drought conditions since late April, and 88 percent of the state has been experiencing extreme drought or exceptional drought since late July, according to the U.S. Drought Monitor.

In Nevada, only two-thirds of the state is experiencing extreme or exceptional drought, which are the most severe of four drought levels. But the entire state has been in drought since early February, the Drought Monitor shows.

Record-low water levels at Lake Oroville in Northern California forced officials in August to stop running a hydroelectric dam for the first time and have prompted other water conservation measures.

“Things are quite, quite bad on the reservoir situation,” Abatzoglou said. “We had record heat this summer across most of California and Nevada.”

Low reservoir levels have forced both California and Nevada to rely on groundwater to supply water for agriculture and human consumption, state officials said yesterday.

“With the extra reliance on groundwater and pumping, we’re seeing a corresponding decrease in groundwater levels,” Steven Springhorn of the California Department of Water Resources told the NOAA conference.

Levi Kryder of the Nevada Division of Water Resources said that groundwater levels in the state “are generally on a downward trend.”

Drought in the two states has been exacerbated by record-high temperatures in June through August and minimal precipitation in the winter and spring.

“We had a terribly dry winter last year,” Abatzoglou said.

In California, the average temperature from June through August was a record 77.3 degrees Fahrenheit, which is 5.1 F above the normal temperature for the three-month span, according to government records dating to 1895.

Nevada’s average temperature of 74.2 F from June through August also was a record and was 5.5 F above the historical average.

Nearly 2.5 million acres has burned in California so far this year, according to the California Department of Forestry and Fire Protection. That’s more than double the number of acres that burned on average in the previous five years as of Sept. 27.

The Dixie Fire in northeastern California has burned 963,000 acres and is likely to eclipse last year’s 1.03-million-acre August Complex as the largest fire in state history.