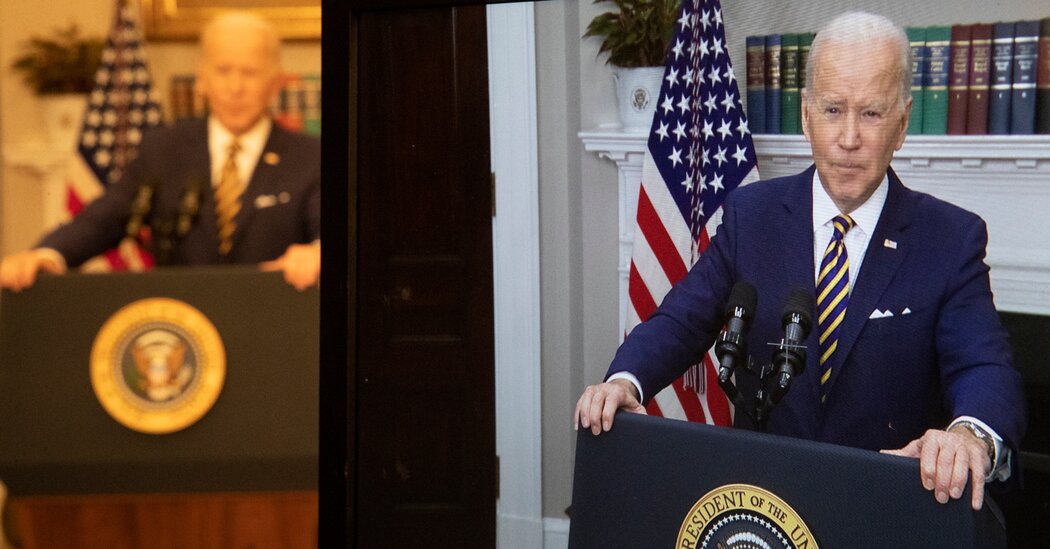 The Democratic Party is going through one of its periodic convulsions, with an insurgent left battling for pre-eminence over a centrist establishment led by President Biden.

Biden struggled to balance these two wings in his first year in office, often having to shuttle between one faction of lawmakers and another to forge compromise.

There is no better example than his ill-fated promise to bind together two major pieces of legislation, Build Back Better and the infrastructure bill, in a kind of pinkie promise between progressives and moderates.

Now, as Biden confronts the daunting challenge of holding his party together through a difficult midterm campaign season, his big-tent approach is getting support from one of the left’s most influential public intellectuals: the Georgetown University historian Michael Kazin.

Kazin’s book, “What It Took to Win: A History of the Democratic Party,” traces the party’s evolution from its roots in the 1800s and argues that Democrats have been most successful when their wings have been united.

But for a younger generation of progressive politicians, like Representatives Alexandria Ocasio-Cortez of New York and Cori Bush of Missouri, who came of age at a time of growing disillusion with the syrupy pace of electoral politics, unity hasn’t always been the path. Ocasio-Cortez was one of few Democrats who voted against the president’s infrastructure bill, and she has aggressively backed primary challengers to Democratic incumbents.

Kazin concludes his book with a warning to his own side, that the party “can taste victory consistently only if its activists, candidates, and officeholders debate their differences without one side denouncing or seeking to purge one another.”

What is the Democratic Party, anyway?

The book tries to link the party’s origins in Andrew Jackson’s fiery Southern populism to today’s cosmopolitan coalition of “college-educated people of all races in major metropolitan areas and Black and Hispanic working people,” as Kazin defines it.

It’s a difficult throughline to draw. The distance between those two Democratic parties is vast, and Kazin must constantly temper his admiration for an institution founded on the idea “that the economy should benefit the ordinary working person” with his disgust for its past sins of supporting slavery and Jim Crow.

The book’s very title hints at the moral compromises Kazin implies were necessary for the party to win power over its 194 years of existence, but it’s also a nod to “What It Takes,” Richard Ben Cramer’s acclaimed account of the 1988 presidential race.

The exercise of trying to connect the party’s distant past with its fractious present raises a fascinating question: What, exactly, is the Democratic Party? Is it a set of ideas? An institution? A coalition of certain types of voters?

“It’s all those things,” Kazin said in an interview. “But the real question is: What does it stand for?”

Kazin, who has edited the left-wing magazine Dissent for many years, comes to the project as a longtime activist and a proud member of the Democratic Socialists of America. “My commitment to the Democrats is an ambivalent one, alloyed with regret and caution,” he confesses.

So the book is not just a straightforward recounting of events — it doubles as a gentle manifesto in favor of what he calls “moral capitalism.”

“Throughout their history,” Kazin argues, “Democrats won national elections and were competitive in most states when they articulated an egalitarian economic vision and advocated laws intended to fulfill it.”

He wrestles with what Democrats must do to win back the white working-class voters who have been abandoning the party for decades and culminating in the election of Donald Trump in 2016. The debate often boils down to: Culture or economics? Identity or policy?

In Kazin’s view, Democrats should embrace the kind of populism that has worked for Senator Sherrod Brown of Ohio, a lonely blue survivor in a state that has grown ruby red over the last decade.

“Democrats have to stand for economic programs that help people who would never think of voting for them,” even if the political payoffs are only incremental, he elaborated in our interview.

It’s a discussion that inevitably runs into fraught territory. The cultural divide in the Democratic Party — between the well-educated elites who run it and the working-class base — has only deepened in recent years, and Republicans have been adept at exploiting that gap.

Intellectuals like Ruy Teixeira argue that Democrats should forcefully rebuke progressive activists who have embraced politically unpopular slogans like “defund the police” — even if it means provoking a clash within the party.

“You can’t have a unified party by alienating young progressive activists,” he told us. “You have to say, ‘Look, we hear you, but we also have to decide which issues are primary right now.’”

Kazin is disdainful of the “professional Democrats” who run the party and its various committees, and he credits the efforts of grassroots groups like Indivisible and Fair Fight with defeating former President Donald Trump.

Yet for all his criticism of the Democratic elites, whom he dismisses as venal and ineffective, Kazin represents a pragmatic strain along the party’s left flank, more aligned with progressive insiders like Pramila Jayapal than with rabble-rousers like Cori Bush.

He’s also willing to forgive the president’s occasional departures from left-wing orthodoxy because, fundamentally, they’re allies in the same cause.

“He’s survived in this long career by making sure he’s always in the center,” Kazin said of Biden. “Like any good politician, he has to think about how to mediate.”

This, he added, is the ultimate lesson of his book: “Without a united party, you can’t do very much at all. And if you don’t win elections, you don’t change things in a serious way.”

The song that never ends

President Biden’s advanced age — he’ll be turning 82 in 2024 — has been a constant source of mischief and speculation. No matter how many times he insists that he plans on running for re-election, the stories about who might replace him atop the ticket keep coming.

Hillary Clinton can relate. Whenever the former secretary of state pops up in the public eye, she is greeted with the same question: Are you running?

It’s often the same pundits who stoke the narrative. The latest example was an opinion essay in The Wall Street Journal titled “Hillary Clinton’s 2024 Election Comeback,” by Douglas Schoen and Andrew Stein.

“Given the likelihood that Democrats will lose control of Congress in 2022, we can anticipate that Mrs. Clinton will begin shortly after the midterms to position herself as an experienced candidate capable of leading Democrats on a new and more successful path,” they wrote.

Schoen, a former pollster for Bill Clinton, was a co-author of a strikingly similar opinion essay published by The Wall Street Journal in 2011. Back then, he urged President Barack Obama to step aside for her.

That didn’t happen, but for the “Hillary’s running” camp, there’s always fresh grist for the mill. When Bill Clinton announced last week that he was reviving his dormant foundation, the Clinton Global Initiative, Peter Schweizer, a right-wing researcher close to Steve Bannon, called it “further evidence that Hillary Clinton may very well run for POTUS in 2024.”

Today, Clinton fended off another are-you-running question from NBC’s Mika Brzezinski. She replied:

“No, but I am certainly going to be active in supporting women running for office and other candidates who I think should be re-elected or elected, both women and men.”