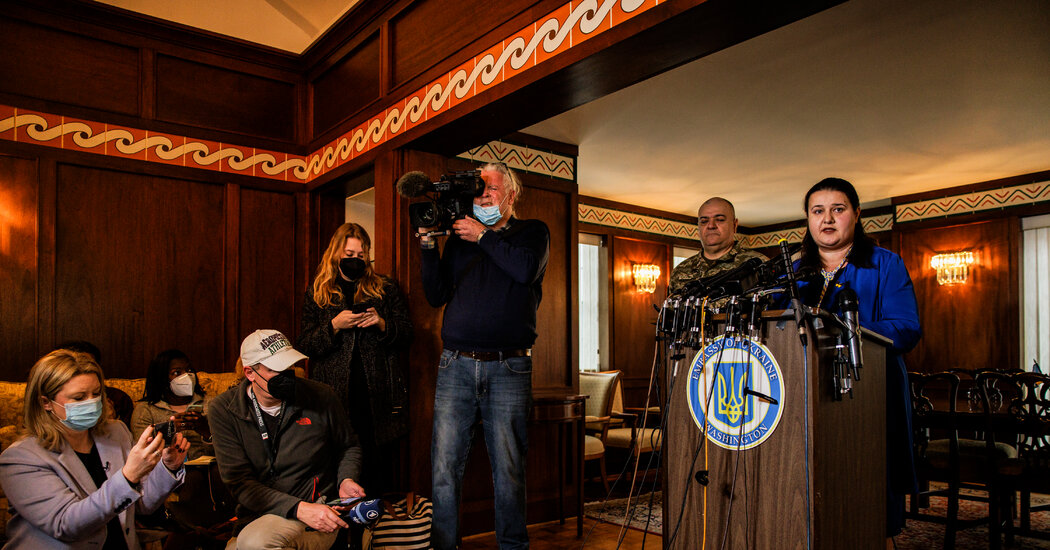 The Ukrainian ambassador to the United States and the whistle-blower who exposed Facebook documents about the company’s handling of misinformation will be among President Biden’s guests in the House chamber during the State of the Union address, White House officials said Tuesday

Ambassador Oksana Markarova and nine other guests will be seated in the first lady Jill Biden’s box, officials said, part of a tradition that dates back decades in which presidents seek to put human faces on the policies they talk about in their speech.

Mr. Biden’s speech will take place during intense fighting in Ukraine, where Russian forces appear poised for an all-out push to take Kyiv, the country’s capital city. Ms. Markarova’s presence in the Capitol underscores the president’s desire to send a message to President Vladimir V. Putin of Russia of America’s support for Ukraine, even as fighting continues.

Frances Haugen, a former product manager at Facebook, delivered scores of internal company documents to Congress about how Facebook’s algorithm promoted misinformation and negative posts. In announcing her as a guest, White House officials called her “an advocate for more humanity and transparency across the tech and social media industry, especially as it relates to teen mental health.”

Seven other people will be guests during the speech, a group that White House officials cited for “their resilience, innovation, service, and courage,” and said were chosen because they represent policies or themes Mr. Biden will reference in the speech.

Joseph “JoJo” Burgess, a 20-year member of the United Steelworkers who spent seven years in the military, including a tour during Operation Desert Storm.

Joshua Davis, a 7th-grader from Midlothian, Va., who advocated when he was 4 years old for the Virginia General Assembly to pass a bill making school safer for children with Type 1 diabetes.

Refynd Duro, a progressive care nurse in Ohio who has been treating Covid patients since the beginning of the pandemic and has served as a bedside nurse for 19 years.

Patrick Gelsinger, the chief executive of Intel, who led a push at Intel to build more semiconductor factories in the United States, a priority for the administration as it tries to stem a shortage of the tiny chips used in cars, appliances and other consumer goods.

Melissa Isaac, the founder of the Saginaw Chippewa Indian tribe’s Project AWARE Program and an elementary schoolteacher who recognized the need to support the mental health of her students and their families.

Danielle Robinson of Ohio, the surviving spouse of Sgt. First Class Heath Robinson, who deployed to Camp Bondsteel in Kosovo and the Camp Liberty/Victory complex in Iraq and was later diagnosed with a rare autoimmune disorder and stage 4 lung cancer. He died in May 2020.

Kezia Rodriguez, a student at Bergen Community College and the mother of twin daughters who enrolled her children in Bergen’s tuition-free child care program.