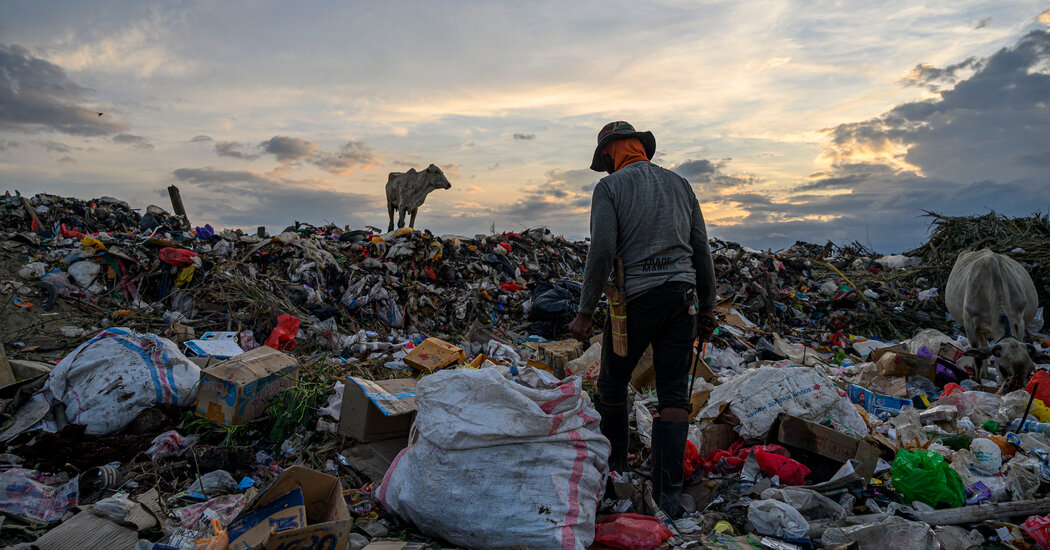 The throwaway plastic that holds our takeout food and wraps our dry cleaning is widely seen as one of the world’s biggest environmental hazards. It pollutes as it is produced, through the extraction of fossil fuels, and, no sooner than it is used, it pollutes again. It is thrown away and can end up clogging waterways and choking animals or sometimes is burned, sending hazardous fumes into the air.

A detailed report published Tuesday sheds new light on who makes all this single-use plastic, 130 million tons a year at last count, and who makes money from it. A surprisingly small group of giant manufacturers and investors are at the heart of the global industry.

The report comes from researchers led by Minderoo, a nonprofit organization based in Australia that advocates for cleaner oceans, along with academics at the University of Oxford and the Stockholm Environment Institute. It was reviewed by KPMG, the accounting firm.

So who makes all this plastic?

For years, environmentalists have pressured consumers to reduce their plastic use and shamed consumer companies to use less plastic in their packaging.

But this report peels back another layer by showing who produces polymers, the petrochemicals that are the building blocks of single-use plastic.

According to the report, half of the world’s single-use plastic is made by 20 big companies. Two U.S. companies, Exxon Mobil and Dow, lead the pack, followed by Sinopec, a Chinese-owned petrochemicals giant, and Indorama Ventures, which is based in Bangkok.

Single-use plastic has been a very good business, and that’s projected to continue. In the next five years alone, production capacity is forecast to grow by 30 percent.

The American Chemistry Council, which represents the plastics industry, called the report “misleading,” saying it failed to acknowledge industry research showing that replacing plastic packaging with other materials could increase greenhouse gas emissions. The group also noted that the Minderoo Foundation is funded by its founder’s stake in a company that mines iron ore. The mining industry is often criticized for its environmental toll.

The Plastics Industry Association said the Minderoo report failed to acknowledge the positive aspects of plastic, such as its role in allowing food to last longer, and the industry’s investments in improving plastic waste collection around the world.

Who invests in its manufacture?

Some of the most familiar names in finance, including companies that control mutual funds and retirement savings accounts, including Vanguard and BlackRock, according to the analysis. And the production is financed by the world’s biggest banks, including Barclays and JPMorgan Chase.

Governments are also big stakeholders in this industry. About 40 percent of the largest single-use plastic makers are partly owned by governments, including China and Saudi Arabia.

There’s a huge disparity between richer and poorer nations.

The average American uses and throws away 110 pounds, or roughly 50 kilograms, of single-use plastic every year. Only Australians currently match American scales of waste.

The average Chinese person uses only about a third as much as an American. The average Indian uses less than one-twelfth, according to the Minderoo report.

What is being done?

In a statement, Exxon Mobil said it “shares society’s concern about plastic waste and agrees it must be addressed,’’ adding that the company is increasing the efficacy of recycling and supporting improvements in plastic waste recovery.

Many longstanding proposed solutions to the plastic problem are not working.

Only about 8 percent of plastic gets recycled in the United States, and advocacy efforts to persuade consumers to use less plastic have failed to gain traction.

State and municipal governments have had success in banning certain items like plastic grocery bags, foam cups and drinking straws. But the efforts focused on curtailing the production of single-use plastic have been limited so far.

A big challenge is that the economics favor more plastic production. It is far cheaper to make a soda bottle out of newly produced plastic than from recycled plastic.

That has led the European Union to issue a directive calling for consumer brands to use at least 30 percent recycled content in plastic bottles by 2025. But it remains to be seen whether other governments will take steps to mandate a shift toward a so-called circular economy that leads to less plastic production.