Here are 3 key moments from the final night of the Republican convention. 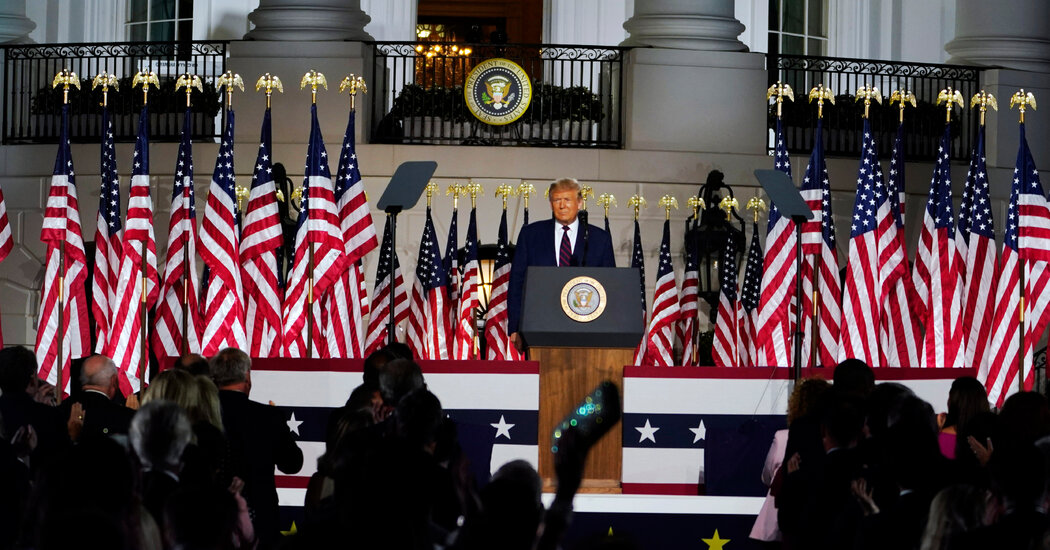 In addition to President Trump’s lengthy speech from the South Lawn of the White House, the last night of the Republican National Convention featured relentless attacks on Joseph R. Biden Jr. and an appearance from a prominent member of the Republican establishment: Senator Mitch McConnell, the House majority leader. New York Times reporters Jennifer Medina and Sydney Ember discussed their big takeaways from the final night. Here are excerpts from their conversation:

The G.O.P.’s line of attack on Biden: Safety first

Sydney: One of the main (and dark) messages on Thursday night — something we’ve heard a lot over the course of the convention this week — was that America would not be safe under Mr. Biden.

Senator Tom Cotton of Arkansas put it especially bluntly: The country under Mr. Trump, he said, was “safer now than four years ago” whereas “Joe Biden would return us to a weak and dangerous past.” He was particularly cutting on Mr. Biden and China, though some of his claims were misleading. It all sounded pretty dire!

Jenny: Absolutely. Apart from President Trump, Senator Cotton perhaps presented the clearest example of how Republicans intend to campaign this fall: by trying to convince voters that they will be in clear danger if Mr. Biden is in the White House.

Jenny: One of the most remarkable things this week was who was not speaking — no former Republican presidents, vice presidents or nominees for those posts, no former cabinet members, no Ted Cruz, no Bushes. That’s what made the cameo from Mr. McConnell more remarkable.

Sydney: Sure, you have the White House, Mr. McConnell seemed to suggest, but can I introduce you to the Senate? In particular, he warned Republicans that they could not afford to lose seats in the upper chamber.

The finale for the presidential showman

Jenny: Of course, there was really one main event this week: President Trump’s acceptance speech.

Sydney: Admittedly, I thought he lacked some of his usual bombast. But some of his attacks on Mr. Biden were scorching, like when he called Mr. Biden’s record “a shameful roll call of the most catastrophic betrayals and blunders in our lifetime” or when he suggested that a pandemic-induced economic shutdown on Mr. Biden’s watch would lead to an increase in drug overdoses, depression and suicides.

I would also note that Mr. Trump produced some revisionist history, particularly when touting his handling of the pandemic. Overall, though, his speech felt a bit low-energy. Even his typically rousing ending, in which he usually declares that he will “Make America Great Again,” seemed a bit deflated.