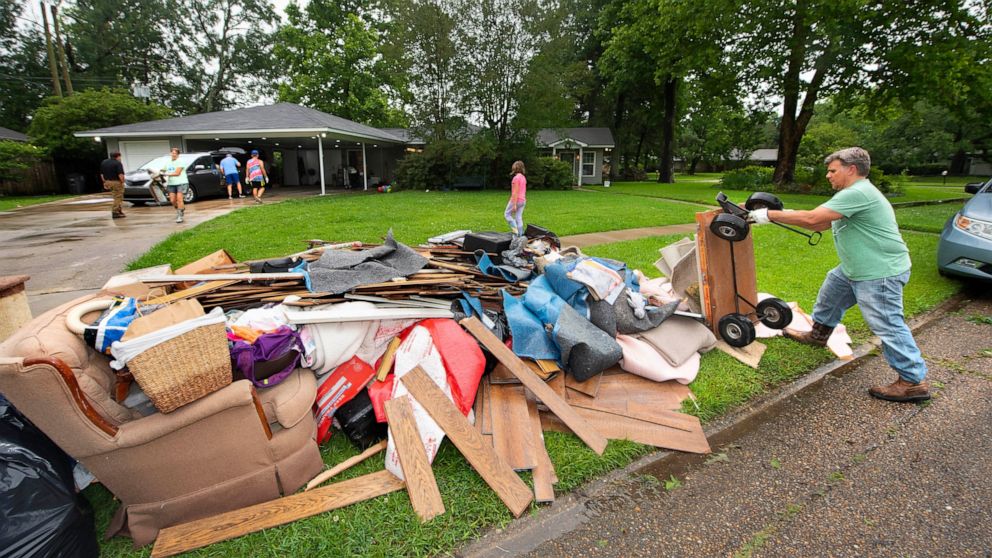 Heavy rain has been pounding parts of Texas and Arkansas before moving over Louisiana, adding to the misery of people whose homes and cars were flooded earlier this week

BATON ROUGE, La. — Heavy rain kept pounding parts of Texas and Arkansas before moving over Louisiana on Wednesday, prompting rescues of people trapped by high water and adding to the misery for people whose homes and cars were flooded by an earlier drenching.

In central Arkansas, at least 15 people were rescued from flash flooding after heavy rainfall late Tuesday and early Wednesday, emergency officials said. There were no reports of injuries. Flood watches remained in effect for much of Arkansas on Wednesday and some areas could see another 1 to 2 inches of rain through Thursday, the weather service in Little Rock said.

The prospect of more rain wasn’t welcome in southern Louisiana, where heavy downpours earlier this week swamped vehicles and closed a major interstate. Three people were killed and one was missing after driving into high water. Flood watches covered a large part of Texas and Arkansas and most of Louisiana on Wednesday. Parts of Oklahoma and Mississippi were also under flood watches.

Up to 4 more inches (10 centimeters) of rain was possible through late Thursday near the coast in the hard-hit Lake Charles, Louisiana, area, the National Weather Service said. Lake Charles is still recovering from back-to-back hurricanes last fall and a deep freeze in February. Twelve to 15 inches of rain fell in parts of Lake Charles in a 12-hour period Monday, the weather service said.

In Baton Rouge, Louisiana, piles of ruined furniture, carpet and clothing lined the street in a neighborhood where residents were beginning to clean up from the earlier storms, WBRZ-TV reported. One man, David Earl, told the station that so much water flowed into his home through cracks and a dog door that his furniture began to float.

Some schools in Louisiana were closed on Wednesday in anticipation of severe weather.

In Texas, strong thunderstorms were rolling through the Houston metropolitan area early Wednesday. More showers and storms are possible in southeast Texas through Friday, the weather service said, and more flooding was possible as heavy rains fall on already-saturated ground.

In Houston, separate lightning strikes caused two apartment complexes to catch fire Tuesday night, but no one was hurt.

“It is mind-boggling,” said Patrick King of Lake Charles. He was at a car rental office Tuesday after his truck was flooded Monday. He still hadn’t moved back into his house after it flooded during October’s Hurricane Delta, but recently had new furniture delivered to the home. Now it’s been flooded again.

Lake Charles Mayor Nic Hunter estimated that 400 to 500 structures flooded during Monday’s downpours. Hunter was mayor last year when the city was hit by Hurricane Laura on Aug. 27 and then six weeks later by Delta. Then in February, the deep freeze froze pipes and caused widespread drinking water problems.

The Louisiana Department of Health said Wednesday that three deaths have been confirmed to be storm-related. The Calcasieu Parish coroner said a 61-year-old man was found in a vehicle submerged under water. The body of 33-year-old Justin Blaine Thompson was found in a vehicle submerged in water under a Baton Rouge overpass, another coroner’s office said. And near Port Allen, 40-year-old Alvarado Morentes Hermelindo died and another person was missing after their car crashed into a canal Monday evening, Louisiana State Police said.