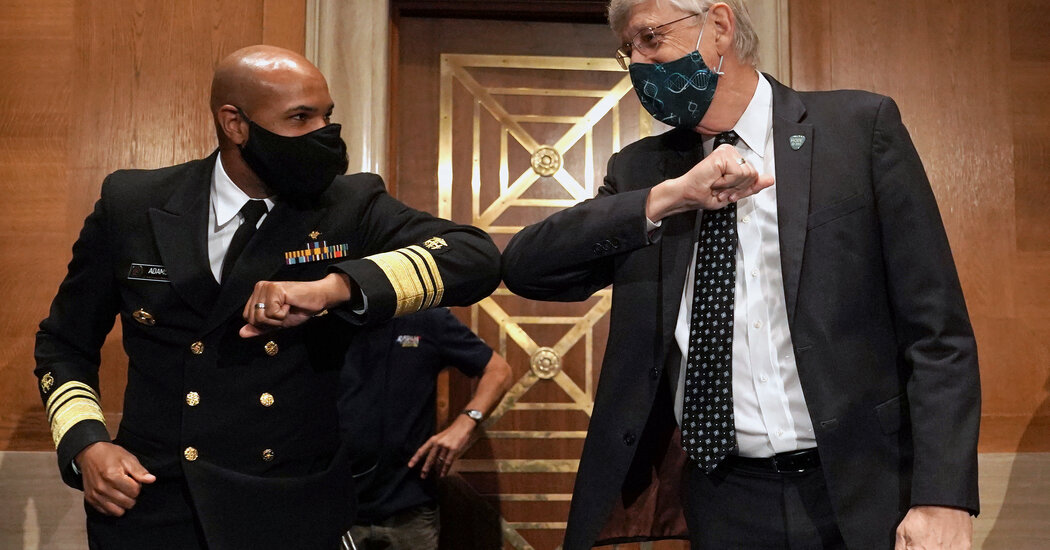 WASHINGTON — Dr. Francis S. Collins, the director of the National Institutes of Health, took issue on Wednesday with President Trump’s suggestion that a coronavirus vaccine would be available by Election Day, as he sought to reassure senators and the public that a vaccine would not be made available unless it was safe and effective.

“Certainly, to try to predict whether it happens on a particular week before or after a particular date in early November is well beyond anything that any scientist right now could tell you and be confident they know what they are saying,” Dr. Collins told a Senate panel at a hearing on the effort to find a vaccine.

Wednesday’s hearing, before the Health, Education, Labor and Pensions Committee, came amid growing concern over whether people would be reluctant to take a coronavirus vaccine, and whether Mr. Trump would apply political pressure on his administration to quickly approve one to give him a boost in his re-election bid.

At a briefing on Wednesday, Kayleigh McEnany, the White House press secretary, pushed back against that criticism.

“Our timing is not about the election,” she said. “It’s about saving lives.”

On Tuesday, a group of drug companies all in the race to develop vaccines pledged that they would not release any vaccines that did not follow rigorous efficacy and safety standards. Hours later, a leading vaccine developer, AstraZeneca, announced that it had suspended a large-scale, late-stage global clinical trial of a vaccine candidate after a patient experienced what may have been a severe adverse reaction.

Dr. Collins pointed to that development as “a concrete example of how even a single case of unexpected illness is sufficient to hold a clinical trial in multiple countries” — and evidence that “we cannot compromise” on safety.

In an interview on “CBS This Morning,” Dr. Anthony S. Fauci, the government’s top infectious disease expert, echoed that sentiment.

“That’s the reason why you have various phases of trials, to determine if in fact these candidates are safe,” Dr. Fauci said.

But while senators demanded transparency from the government, questions remained on how transparent the drug industry will be.

AstraZeneca has said nothing publicly about the patient in the trial, and described the situation in a statement on Wednesday as “a single event of an unexplained illness.” The New York Times, citing an unnamed source, reported late Tuesday that a volunteer in the British portion of the trial had received a diagnosis of transverse myelitis, a rare but serious inflammation of the spinal cord.

When Dr. Collins was asked what happened to the patient in the AstraZeneca trial, he said he did not “have any other details” beyond the Times article.

But while Wednesday’s hearing was underway, StatNews reported that AstraZeneca’s chief executive, Pascal Soriot, shared details with investors on a private conference call that he had not made public. The news outlet cited several unnamed people on the call who said Mr. Soriot attributed the trial’s shutdown to a female patient in Britain who experienced neurological symptoms consistent with transverse myelitis, and had received the vaccine, not a placebo.

The Food and Drug Administration referred all questions about the trial to the company, which did not respond to a request for comment about Mr. Soriot’s reported remarks.

Dr. Collins said he had “cautious optimism” that a safe and effective vaccine would emerge by the end of the year, though he added, “Even that is a guess.”

As the trials proceed, huge questions remain about who will get a vaccine first and how it will be distributed. The surgeon general, Dr. Jerome Adams, told the Senate panel that the administration intended to release guidelines that would allow state-licensed pharmacists to vaccinate anyone older than 3.

And he said the Trump administration was committed to making sure that every American who wants a vaccine can get one without having to pay for it.

“I promise you we will use every federal tool that we have to make sure that cost is not an obstacle for people receiving what will perhaps be the most important and highly anticipated vaccine of our lives,” Dr. Adams said.

Also at issue is whether schools should make coronavirus vaccination mandatory, as they do for vaccines against other diseases, like smallpox and tuberculosis. One Republican on the panel, Senator Rand Paul of Kentucky, an ophthalmologist and a libertarian, insisted that no one should be forced to take a vaccine, and he made the case that the coronavirus was far less of a threat to children.

“We think everything is smallpox and we say submit or else and you can’t go to school unless you get this,” the senator said, adding, “Each individual in a free society should assess the risks of the disease versus the risk of the vaccine.”

Other senators were far more concerned with how to build up trust in the vaccine amid wild conspiracy theories that have taken hold online. At one point, Senator Doug Jones, Democrat of Alabama, asked both doctors to debunk the “absolutely crazy” theories they have heard. Dr. Adams jumped at the chance.

Mr. Trump has pivoted from vaccine skeptic to enthusiast. In recent weeks he has variously predicted that a coronavirus vaccine would be available by Election Day or even the end of next month. Democrats on the panel grilled both Dr. Collins and Dr. Adams on the effects of such unsubstantiated predictions, and whether they would erode faith in the development process.

Dr. Collins demurred as Senator Elizabeth Warren, Democrat of Massachusetts, asked him whether Mr. Trump’s misinformation would discourage people from taking the vaccine and hurt the effort to distribute it.

“I’m not sure I know the answer to that question,” Dr. Collins said. When Ms. Warren pressed him again, he added, “I just hope Americans will choose to take the information they need from scientists and physicians and not from politicians.”