‘Have no illusions’: UN’s major bodies both meet on Ukraine 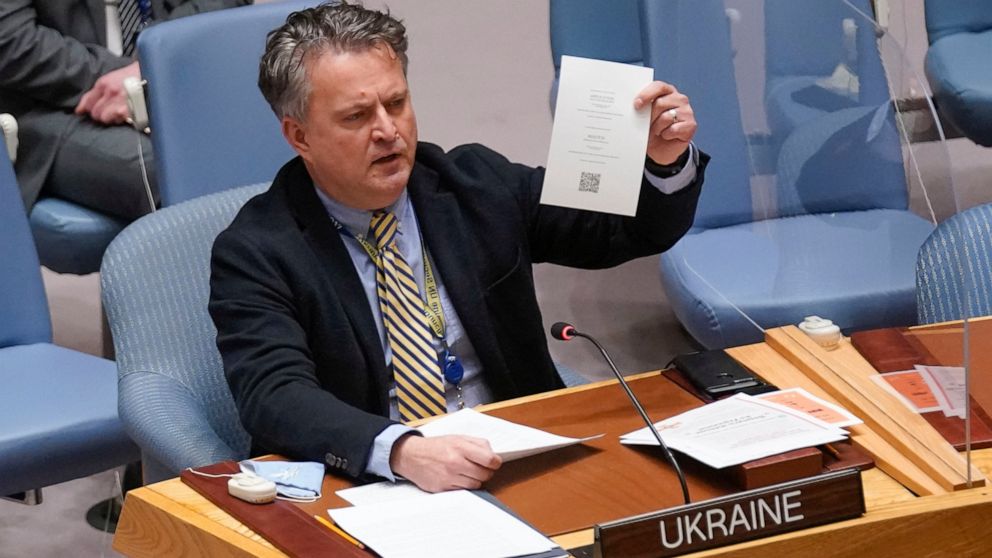 UNITED NATIONS — Ukraine’s ambassador told the world that if his country is crushed, international peace and democracy are in peril, as the United Nations General Assembly held a rare emergency session in a day of frenzied diplomacy at the U.N. about the days-old war.

Ukraine “is paying now the ultimate price for freedom and security of itself and all the world,” Ambassador Sergiy Kyslytsya said at the assembly’s first emergency meeting in decades.

Russian Ambassador Vassily Nebenzia reiterated his country’s assertions that what it calls a “special military operation” in defense of two breakaway areas in eastern Ukraine is being misrepresented.

“Russian actions are being distorted and thwarted,” he complained. Russia has repeatedly sought to blame Ukraine for what Moscow claims are abuses of Russian speakers in the eastern enclaves.

“The Russian Federation did not begin these hostilities that were unleashed by Ukraine against its own residents,” he said. “Russia is seeking to end this war.”

As Russian and Ukrainian officials held talks on the Belarus border, the U.N.’s two major bodies — the 193-nation General Assembly and the more powerful 15-member Security Council — both had meetings scheduled Monday on the war. In Geneva, the U.N. Human Rights Council voted to hold its own urgent session.

“The guns are talking now, but the path of dialogue must always remain open,” U.N. Secretary-General Antonio Guterres told the assembly. “We need peace now.”

The assembly session will give all U.N. members an opportunity to speak about the war — more than 100 signed up to do so — and to vote on a resolution later in the week.

The draft resolution, obtained by The Associated Press, demands that Russia immediately stop its attack on Ukraine and withdraw all troops and urges an “immediate peaceful resolution” through dialogue and negotiations. It deplores what it calls Russia’s “aggression” and the “involvement” of Belarus, which is siding with Moscow.

Many countries’ envoys exhorted their colleagues to vote yes.

“Many of us have good relations with Russia. We love the culture, admire the traditions and have good Russian friends,” Austrian Ambassador Alexander Marschik told the assembly. “But a good friend, an honest friend, will speak up and say what needs to be said and what needs to be done when a friend commits and illegal and evil act.”

But China, a close ally of Russia, called for fostering “conditions conducive to direct talks between the parties concerned,” frowning on “any approach that may exacerbate tensions.”

“The Cold War has long ended,” Chinese Ambassador Zhang Jun said. “Nothing can be gained from stirring up a new Cold War, but everyone will stand to lose.”

The Security Council meeting, set for later Monday, was focused on the humanitarian impact of Russia’s invasion. French President Emmanuel Macron sought the session to ensure the delivery of aid to growing numbers of those in need in Ukraine.

French Ambassador Nicolas de Riviere said Sunday that France and Mexico would propose a resolution “to demand the end of hostilities, protection of civilians, and safe and unhindered humanitarian access to meet the urgent needs of the population.” He said it would probably be put to a vote Tuesday.

Both meetings follow Russia’s veto Friday of a Security Council resolution similar to the one now going before the assembly. The council vote was 11-1, with China, India and the United Arab Emirates abstaining.

Last week, Ukraine asked for a special session of the General Assembly to be held under the so-called “Uniting for Peace” resolution. It was initiated by the United States and adopted in November 1950 to circumvent vetoes by the Soviet Union during the 1950-53 Korean War.

That resolution gives the General Assembly the power to call an emergency session to consider matters of international peace and security when the Security Council is unable to act because of the lack of unanimity among its five veto-wielding permanent members — the United States, Russia, China, Britain and France.

“With the Security Council having failed to deliver against its responsibilities, we, the General Assembly, must now stand up to play our part,” said New Zealand’s ambassador, Carolyn Schwalger.