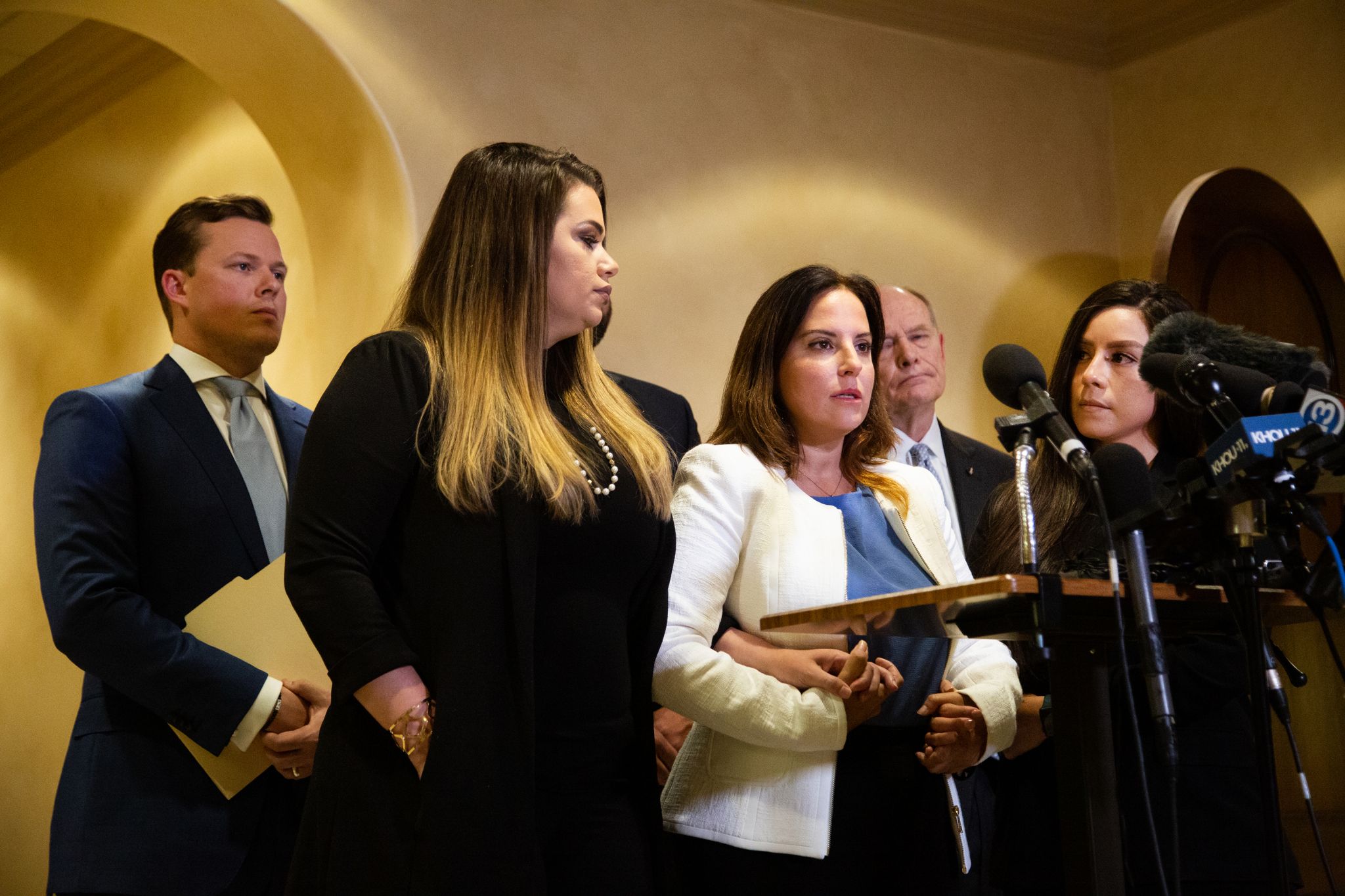 Untrained deputies picked for “undercover” vice assignments — only to be molested and traumatized by superiors. Prostitution stings devolving into “booze-fueled playgrounds.” And a concerned Precinct 1 Constable Office’s employee, fired after she reported the alleged misconduct to the department’s internal affairs division.

Those are among  allegations laid out in a bombshell 40-page civil rights lawsuit filed Monday morning in federal court against Harris County, Precinct 1 Constable Alan Rosen, and two of his top-ranking superiors.

Three current and former deputy constables — and one other plaintiff — alleged a wide array of misconduct at the constable’s office, one of the largest in Harris County, including sexual harassment, sexual battery, civil rights violations and retaliation.

At a Monday morning news conference, attorney Cordt Akers discussed the lawsuit, flanked by three of the plaintiffs in the case: Felecia McKinney, Jacquelyn Aluotto and Liz Gomez.

Rosen, he said, ran, oversaw, and approved an “ongoing free for all.”

“Senior male deputies were given carte blanche to use young female deputies for their own sexual pleasure on these operations without fear of repercussions.”

Rosen’s office has not commented on the lawsuit.

According to the lawsuit, the supervisors of the constable’s office’s human trafficking unit decided to change operations to perform “bachelor party” stings. The plan was simple, according to the lawsuit: deputies set up surveillance in a hotel room, and male and female deputies — all undercover — pretended to be partygoers, with some of the female deputies posing as prostitutes, potentially enticing sex workers to agree to sell sex for cash — and quickly leading to an arrest.

Three current and former female deputy constables alleged they were picked for the undercover unit despite being inexperienced rookies. Gomez “was continuously subjected to sexual harassment, unwarranted touching, unwanted kissing, molestation, and sexual ridicule during her work on the Human Trafficking Unit,” according to the suit.

The suit also states the female deputies were ordered to purchase and wear revealing clothing for these operations — only to be kissed and otherwise molested by one of their superiors, and that deputies drank copious amounts of alcohol during the so-called “bachelor party” stings.

Attorney Brock Akers — Cordt Akers’ father and another lawyer on the case, said that the case was unique in the many decades he has practiced law in Harris County.

“I thought that I’d seen it all. I was wrong,” he said. “(Precinct 1) leadership gave in to their own prurient turning the female deputies they commanded into the sex exploitation victims they were arguably trying to save.”

According to the suit, Gomez asked to be removed from the unit after her first two undercover operations.

“After ridicule and denigration, her request was reluctantly granted,” the suit notes, and Gomez was subjected to “continuous” harassment for “not having what it takes.”

Her experience was not the only one. The deputy who replaced her, Marissa Sanchez, said she was instructed “to wear revealing clothing, simulate sexual activity, and allow [her superior] to kiss, touch, and fondle her.”

When Sanchez reported the alleged misconduct to Rosen, she was transferred to a less prestigious assignment, according to the lawsuit.

The court filing also alleges that the women suing Precinct 1 said they were told they would need to be willing to do “whatever it takes” to make their arrest, but that the so-called bachelor parties had little law enforcement purpose, and rather for superiors to have a “good time.”

The third deputy constable, McKinney, alleged that she was assigned to one sting — at a massage parlor — where she was sexually assaulted.

“In order to appease HCCO-1 supervisors and comply with orders, McKinney was sent in to disrobe with a known rapist, like a lamb to the slaughter, and allow him to assault her,” the lawsuit states. “Only after the assault was she ordered to give the ‘bust’ signal so that an arrest could be made.”

The last allegations in the lawsuit come from Aluotto, a former employee who was hired in 2019 as a human trafficking advocate to work with the law enforcement department. According to the suit, Aluotto became concerned that the Task force was devoting little energy to solving cases, or making high-up-the-chain arrests, but its energy seemed focused on the bachelor party stings.

The result: victims went missing, stopped cooperating, and cases “otherwise fell apart,” according to the suit.

When she tried to bring her concerns to Rosen, Aluotto was “quickly shut down,” according to the suit, and told not to tell her concerns directly to him, because ‘that would make him liable.’”

Aluotto then took her concerns to the Harris County District Attorney’s Office. District Attorney Kim Ogg’s office referred the matter to the constable office’s internal investigators, according to the suit.

Dane Schiller, spokesman for the Harris County District Attorney’s Office, said in a statement: “Anytime we receive an allegation from an officer accusing a fellow officer of impropriety, we connect them with appropriate investigative entities. We are not the investigative agency for such allegations, be them administrative, civil or criminal. In this matter, our Sex Crimes Division quickly asked Constable Pct. 1 Internal Affairs to investigate whether there was evidence of a crime and Ms. Aluotto has represented she contacted the Texas Rangers. Nothing has been presented to prosecutors by either agency.”

Aluotto spoke to the internal investigators in November 2020. The next day, she her work hours were reduced to zero, a defacto firing, according to the suit.

Aluotto, the lone plaintiff to speak at the news conference, said she and the other women who raised concerns received threatening phone calls after the lawsuit was filed and made public.

The lawsuit came after the women spent more than a year raising concerns about the taskforce’s operations.

“I don’t think any of us ever thought we’d be standing up here,” she said. “We want to send a message, this can never happen again.”