Haboob? Derecho? By Any Name, Plains Dust Storm Was Strong. 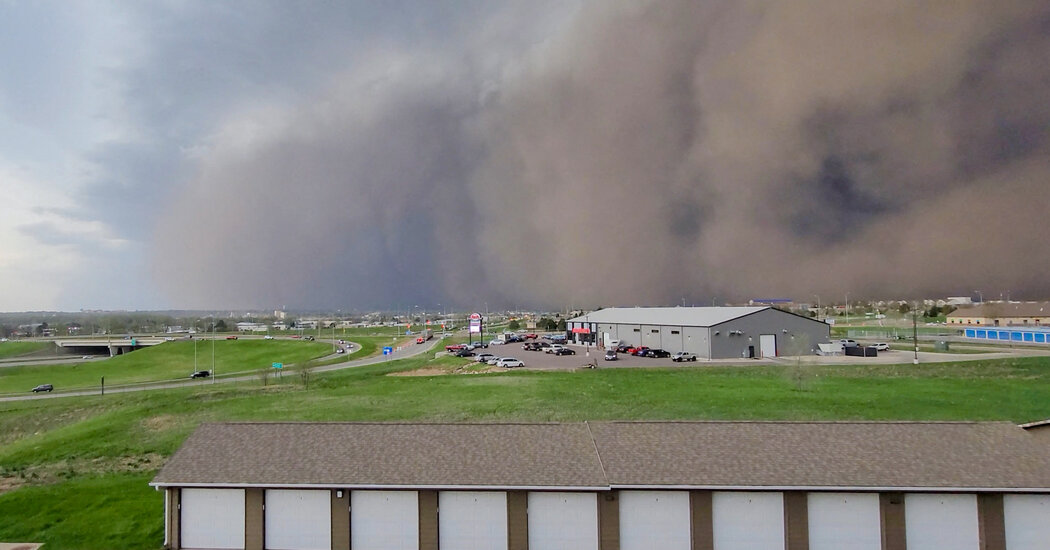 A storm system with powerful winds produced an unusual blinding wall of dust on Thursday that made it so hard to see that the authorities in Nebraska shut down roads. It then moved through parts of Iowa and South Dakota.

It also gave rise to possible tornadoes in Minnesota, where one death was reported.

Some local news outlets referred to the dust blackout as a “haboob” — a term more commonly used in the Middle East and sometimes a source of irritation for American weather watchers.

Meteorologists said that the wall of dust was technically part of a derecho, which is a powerful wind storm extending more than 240 miles, with a line of quickly-moving thunderstorms.

Brian Smith, a warning coordinator for the National Weather Service in Valley, Neb., said he had never seen one this powerful in his 34 years on the job.

“It’s haboob-like,” Mr. Smith said in a telephone interview on Friday. Storms like this are not at all common in the Central and Upper Plains. “We normally get these in Arizona and New Mexico and even parts of eastern California and West Texas.”

The storms — and the term “haboob” — are more common in some places in Australia, the Middle East and the Sahara, and in Sudan and the Arabian Peninsula, Mr. Smith said.

The Weather Service describes the phenomenon as an extreme dust storm that can last for up to three hours. Derived from an Arabic word, a haboob happens when a thunderstorm spawns such powerful winds that they generate a dust storm that drastically reduces visibility.

The conditions that generated the dust storm in Nebraska likely were caused by intense gusts of wind — up to 80 miles per hour — that interacted with dusty conditions caused by long periods of dry weather, and shot across farmlands during the season of spring work in the fields.

“You usually see these things out in the Southwest, especially in summertime in Arizona,” Mr. Smith said. “Thunderstorms pop up, some wind picks up, dust, and you get this widespread intense dust storm.”

He said he began to receive calls from law enforcement and emergency service personnel reporting wind damage and zero visibility. The reports came in over a five-hour period starting on Thursday at about 3 p.m. local time as the dust storm barreled across multiple counties across eastern Nebraska, he said.

The state’s Department of Transportation told drivers to stay off the roads “unless absolutely necessary.”

“We have had some cases where we have had some dust events that were fairly isolated,” Mr. Smith said. “But the widespread nature of this one, I had never seen before.”

The dust storm was part of a complex system of severe weather that tore through parts of Nebraska, northwestern Iowa, South Dakota, Minnesota and southeastern North Dakota.

The system produced powerful winds across the Upper Plains, including in Madison, S.D., where gusts reached 97 miles per hour on Thursday, according to the Weather Service office in Sioux Falls, S.D.

“We haven’t seen anything like this,” said Todd Heitkamp, a meteorologist with the Weather Service office in Sioux Falls who has been with agency for 35 years. There were reports of downed trees and overturned vehicles. “There was probably nothing that was probably more terrifying-looking than that because you knew what was going to hit the city of Sioux Falls.”

As the storm system moved to the northeast on Thursday, it produced powerful winds in Minnesota.

In Kandiyohi County, one person was killed when strong winds pushed a grain bin onto a vehicle, The Star Tribune reported. The Weather Service office in Twin Cities, Minn., said it was sending survey teams to investigate reports of tornadoes on Thursday night.

Whatever you call it, the storm was strong: The Weather Service received more than 350 reports of damaging winds, from Kansas to Wisconsin, on Thursday, including numerous reports of gusts greater than 75 miles per hour, which are considered hurricane force and are a rarity in the region.

Accused of Cheating by an Algorithm, and a Professor She Had Never Met