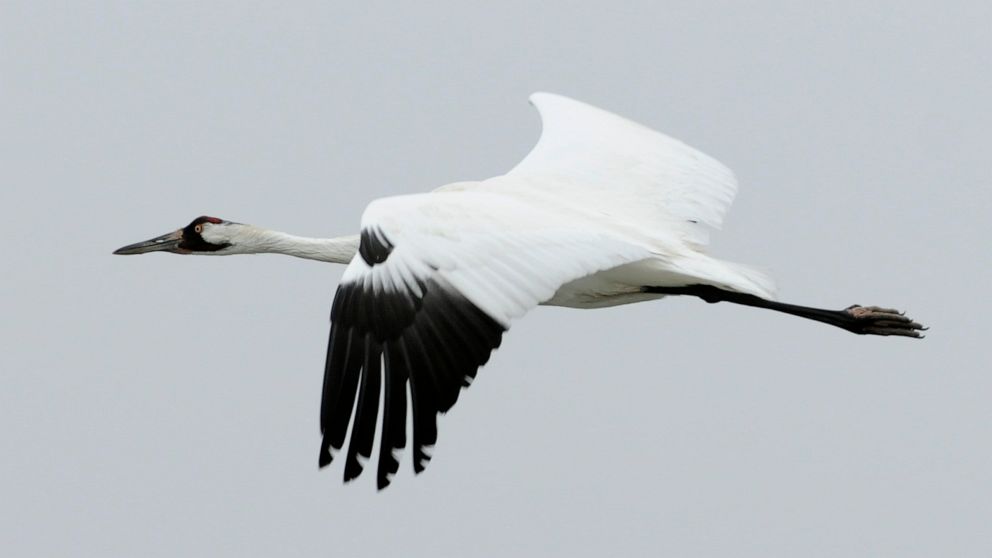 The Biden administration made secret plans to weaken protection for whooping cranes, and documents obtained through an open records request show officials “seem to have been deliberately misleading the public,” an environmental group says.

The documents show that U.S. Fish and Wildlife Service plans to propose changing the only natural flock’s status from endangered to threatened, the Center for Biological Diversity said in a news release linking to some of the papers.

“Whooping cranes have a long way to go on their road to recovery, but with the full protections of the Endangered Species Act they were at least heading in the right direction. Weakening protections at this point would be heartbreaking and would likely undo much of the progress they’ve made so far,” Stephanie Kurose, a senior policy specialist at the center, said in an email Tuesday.

The Fish and Wildlife Service is considering whether a proposal to “downlist” the crane would be appropriate but has not made such a proposal, the agency said in a statement emailed Tuesday to The Associated Press.

“Whoopers” are the world’s rarest cranes. There are about 500 birds in the natural flock, which was down to 15 in 1941. There also are a total of about 150 in two flocks that authorities are trying to establish in case illness or other disaster hits the original flock, and about 145 in captivity, according to the International Crane Foundation.

The flocks in process are classified “experimental” and are treated as threatened to allow more flexibility in their management.

The federal agency said it announced in May 2021 that it was reviewing the bird’s status, and the possibility of a downlisting proposal was made public in fall 2021.

“Reclassification to threatened status would not weaken necessary and appropriate” protections under the Endangered Species Act, the statement said.

Publication of the fall list in December was what prompted the center to make its public records request, Kurose said. The documents it received included a draft press release headlined “North America’s Tallest Bird on the Road to Recovery / Decades of conservation efforts lead to a proposed change from endangered to threatened for whooping crane.”

Kurose said reclassifying the flock that migrates between Texas and Canada as threatened would remove protections against harm from pesticides. It would also restrict protections against hitting transmission lines or other structures to the birds’ main migratory corridors, she said in an email.

The whooping crane is North America’s tallest bird, standing up to 5 feet (1.5 meters) from black feet to a featherless black mask and red cap. Their feathers are white except for black tips to wings that can span nearly 7 feet (2.1 meters).

Biologists estimate more than 10,000 lived in North America before habitat loss and overhunting nearly killed them off.

The current total of about 800 is up about 250 from 2010, when officials were finishing plans to release juveniles in Louisiana the following year. The Louisiana flock now numbers about 70. About 80 are in the other “experimental” flock, trained with ultralight aircraft to migrate between Wisconsin and Florida.

The Fish and Wildlife statement said any reclassification proposal for whooping cranes would be announced in the Federal Register with time for public comments, which would be considered in any final decision.

However, the Center for Biological Diversity said a March 8, 2021 memo states that a committee had decided to recommend the change, and emails from July 2021 show that the crane was intentionally omitted from a list of proposed changes two months later.

The delay was prompted “out of fear that the decision would trigger intense public scrutiny and backlash,” the organization said.

“Even though the Service has nearly completed a proposed rule to downlist the whooping crane and developed a public outreach plan for messaging the proposal, the agency continues to deny it has been seriously considering weakening protections,” according to the group.