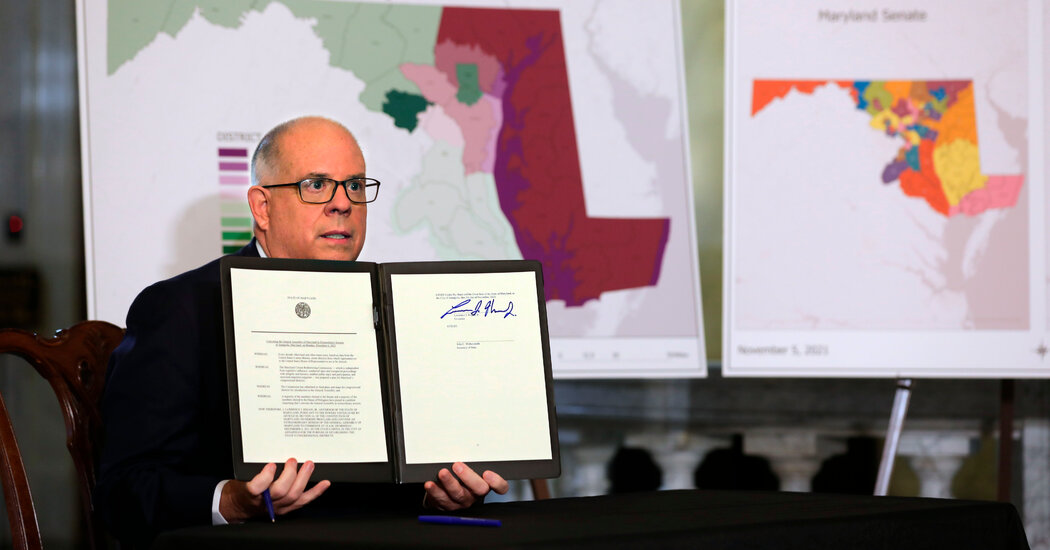 Gov. Larry Hogan of Maryland on Monday signed into law a new congressional map drawn by Democrats, a little more than a week after a judge called their previous effort an “extreme gerrymander” and threw it out.

Mr. Hogan, a Republican, agreed to approve the maps after Democrats dropped their appeal of the judge’s ruling. He described the deal as “a tremendous victory for democracy and for free and fair elections in Maryland” and said the new map was “a huge improvement” over the original one.

The new map will most likely result in a congressional delegation that will look a lot like the current one.

Democrats are favored to win six districts under the new map, and Republicans to win one, with an eighth district considered competitive, according to Douglass Mayer, a former aide to Mr. Hogan and the spokesman of Fair Maps Maryland, an anti-gerrymandering organization. The state is currently represented by seven Democrats and one Republican.

The map rejected in court would have created seven safe Democratic districts and one competitive district, cutting out the likely Republican seat.

The decision to toss out the earlier map, by Senior Judge Lynne A. Battaglia of the Circuit Court for Anne Arundel County, was the first time this redistricting cycle that a Democratic-controlled legislature’s map has been rejected in court. Last week, a judge in New York threw out a congressional map there, saying Democrats drew it with “political bias.”

Republicans have had their efforts blocked in court as well, including in North Carolina and Ohio, though Ohio’s maps remain tied up in legal challenges.

The midterm elections are set to be a test for Democrats, who are trying to hold on to slim majorities in the House and Senate despite President Biden’s low approval rating. Republicans, on the other hand, are looking to recapture power, in part by tapping into voters’ frustration with the government and the economy.

But the once-a-decade process of redrawing district lines following the census has emerged as a potentially decisive factor in determining who will control Congress. Both parties have sought to give themselves an advantage in states across the nation.

“Gerrymandering,” Mr. Hogan told CNN on Sunday, “I think, is a cancer on our politics. It’s bad no matter which party does it.”

Judge Battaglia, who was appointed by former Gov. Parris N. Glendening, a Democrat, said in her March 25 ruling that the earlier map had “constitutional failings” and ignored requirements of focusing on “compactness” and keeping similar communities together.

She ordered the General Assembly to redraw the map by March 30, an incredibly tight deadline. The legal challenges over the map led the Maryland Court of Appeals to move the state’s primary election to July 19 from June 28.

In response to the judge’s ruling, Democrats submitted a new map for Maryland, which Mr. Biden carried with 65 percent of the vote in 2020, but also said they would appeal.

On Sunday, when Mr. Hogan was asked on CNN if he would sign the new map, he said, “I’m going to try to convince them to drop the appeal and then maybe we can move forward.” The appeal was dropped Monday.

State courts have emerged as the central arena for political parties and voters to challenge maps, after the Supreme Court ruled in 2019 that partisan gerrymandering could not be challenged at the federal level.

Mr. Hogan said that, in his view, the new congressional map was not as good as the one drawn by the bipartisan Maryland Citizens Redistricting Commission, whose co-chairs he appointed.

“Obviously you can’t get everything you want, but it’s almost everything we want,” he said.