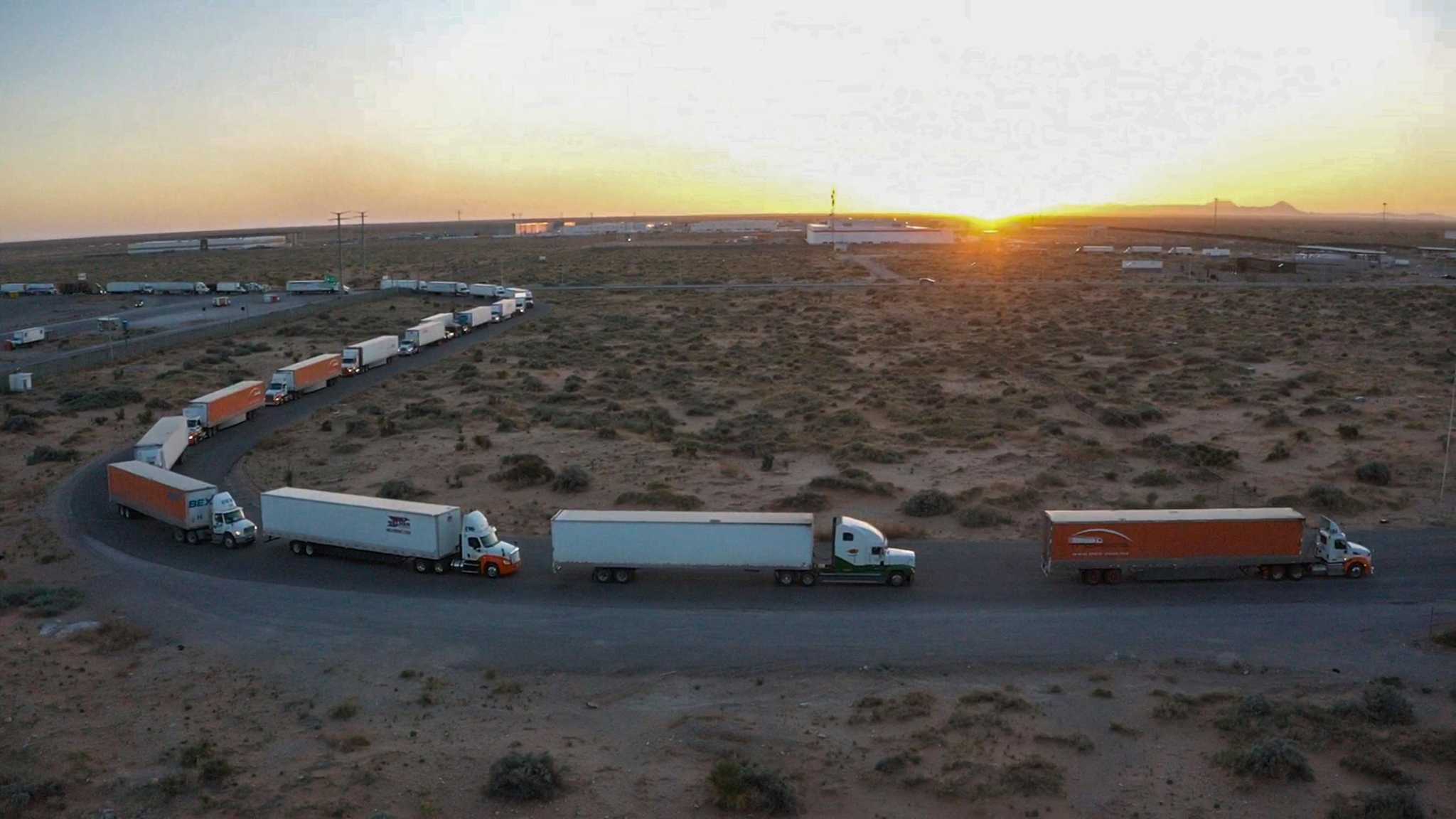 Texas Gov. Greg Abbott relented Wednesday, agreeing to ease the additional safety inspections of trucks at the busiest border entry point near Laredo in exchange for promises of more border security by Mexican officials along one 8-mile stretch of the border.

The move comes after Abbott endured days of withering criticism from both Democrats and Republicans and faced pushback from shipping companies and the Texas Trucking Association.

Since he implemented the more thorough inspections a week ago, truck traffic at many of the Texas ports of entry have stalled. In Laredo, the nation’s biggest trucking port, the normal 30 minutes or less to get across ballooned to three hours or longer, delaying shipments of everything from produce to electronics and driving up costs for trucking companies.

But Abbott said on Wednesday that the easing of inspections is only happening along the 8-mile stretch of border with Nuevo Leon, which has just a tiny portion of the 1,254-mile border with Texas. Abbott said he’s talking to leaders of other Mexican states to work out similar agreements in return for speeding up inspections in Texas.

“Since Nuevo Leon has increased its security on its side of the border, the Texas Department of Public Safety can return to its previous practice of random searches of vehicles crossing the the bridge from Neuvo Leon,” Abbott said with the Nuevo Leon Gov. Samuel Alejandro García Sepulveda at his side.

Almost instantly, wait times plummeted for truckers trying to get across the Columbia-Solidarity Bridge in Laredo, which connects Nuevo Leon to Interstate 35 and is by far the busiest port in Texas for truck traffic coming from Mexico. More than 2.5 million trucks crossed into Laredo in 2021, according to the U.S. Department of Transportation.

At 3 p.m. it was taking those trucks six hours to get across the bridge. Within an hour of Abbott signing his agreement with García, the wait dropped to five minutes.

Abbott was far from admitting defeat on Wednesday, insisting the increased inspections were always about improving safety on Texas roadways and forcing Mexican officials to do more at the border.

DPS officials have estimated that they have found that 25 percent of all vehicles coming across the border had serious mechanical issues, like bad brakes or tires.

“There may be Texans whose lives were saved because of the vehicles taken out of operation by what the Texas Department of Public Safety did,” Abbott said. “Because otherwise those dangerous vehicles, with dangerous brakes could have run into a Texan walking across the road or driving down a road.”

Abbott last week instructed the Texas Department of Public Safety to ramp up truck inspections because “the cartels that smuggle illicit contraband and people across our southern border do not care about the condition of the vehicles they send into Texas.”

However, the state troopers were not allowed to inspect vehicles for illegal drugs or human smuggling. They could only check vehicle working conditions, like brakes, tires and taillights.

But as those inspections went into place, travel times at the busiest truck traffic ports exploded, with drivers saying waits lasted eight hours at some border crossings, forcing truckers to burn more diesel and risking perishable cargo like produce.

In Mexico, the governor’s order triggered a revolt from truckers who have set up blockades shutting off all U.S. trucks from entering the country at key points in Hidalgo County and in El Paso.

The White House slammed Abbott on Wednesday, saying his actions were resulting in more supply chain disruptions and hindering U.S. Customs checks at the border.

“The continuous flow of legitimate trade and travel and CBP’s ability to do its job should not be obstructed,” White House Press Secretary Jen Psaki said in the statement.

Even Abbott’s biggest allies began to turn against his policy over the last few days. The Texas Trucking Association, which just two months ago endorsed his re-election, released a statement criticizing the policy.

“This is not solving the border problem, it is increasing the cost of food and adding to supply chain shortages,” Miller said.

Abbott blames the Biden administration for not doing more to secure the border. He said he’s having to take unprecedented action to make up for Biden’s neglect, and that the goal all along was to make sure people understood the consequences of an open border and that “Texas isn’t going to tolerate it any more.”

Abbott said he knew the order would lead to Mexican officials reaching out to him, and that he could push directly for better security on their end. He credited García for making commitments to beef up patrols along the border south of the Rio Grande.

“We’re willing to make an effort to patrol all that 14 kilometers we have with Texas to be an example for other states in Mexico,” García said Wednesday.

Abbott said DPS has already been seeing stepped up patrols in Nuevo Leon at the port of entry and along the river.