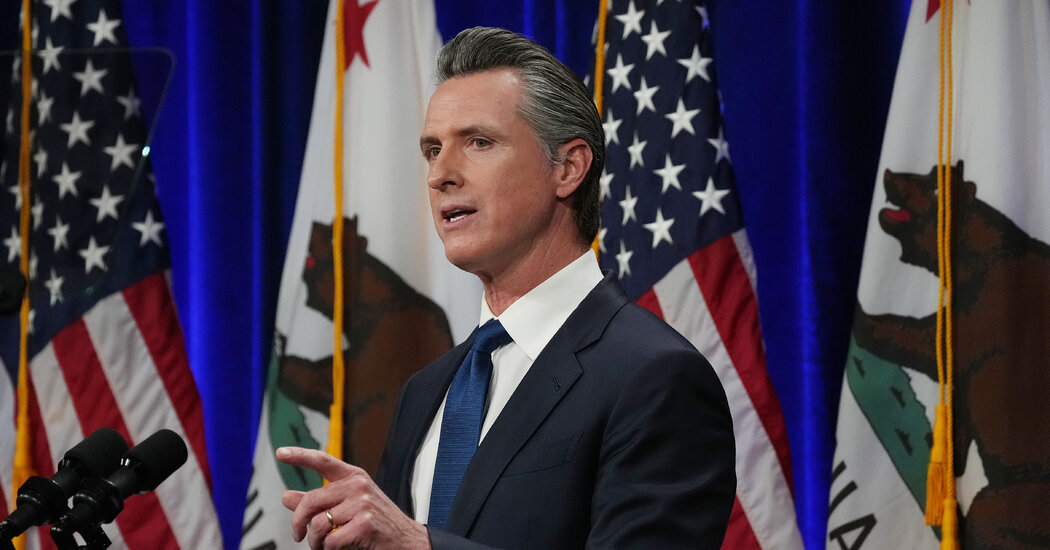 When Rick Perry was governor of Texas in 2013, he made headlines for his repeated attempts to woo businesses away from California. Perry, a Republican, showed up in Sacramento and bought radio ads decrying California’s taxes and regulations.

For the most part, Jerry Brown, the Democrat who led the Golden State at the time, didn’t respond to the provocations. (He dismissed the radio spots as “barely a fart.”)

“It’s the erosion that we’re experiencing in real time across this country of rights that have been hard fought and well-established — at least for most of my lifetime,” Newsom told us.

We asked Newsom why he thinks California needs to lead the pushback. Here is our conversation, edited and condensed:

California and Texas have been considered rivals for a long time. What’s changed?

It’s not just Florida and Texas, although they sort of punctuate this moment. There are these copycat bills that are being advanced in states like Iowa, Arizona and Tennessee. And that’s why you may have seen recently my office express itself a little more pointedly about what the hell is going on.

We’re not only the largest state, but we’re also the most diverse state in the union. We’ve always been the state where people come from around the world for new beginnings, to remake themselves. It’s a point of pride.

I’m hardly naïve about California’s challenges. Quite the contrary. Our biggest critique has been the homeless and housing and the cost of living. And we’re taking those issues on.

But my entire life, not just in my political life, I can’t stand the othering of people. And that’s what they’re doing. We need to stand up to that and let folks know we have their backs even if they’re not in our state, and give them some hope that we can turn this around.

You’ve mentioned that you think even people in your own party need to be woken up to what’s happening. Can you expand on that?

I feel like the president’s got his hands full with Ukraine, inflation and other issues. Speaker Nancy Pelosi has been doing her best at the House to actually pass bills on voting rights, abortion and the like. Senator Chuck Schumer doesn’t have the votes.

So I do think the Democratic Party has to come together. There’s something really profound happening at the state level, and I just think we’ve been sleepwalking. It’s not an indictment of national party leadership. It’s an indictment of all of us. We’re so situationally focused, and the Republican Party is quite disciplined.

I mean, that’s just extraordinary. I’d taken for granted so much of the progress over the last 40, 50 years. I didn’t realize how vulnerable these rights are to the whims of these leaders in these states.

You have previously criticized Texas’ abortion law, which allows private citizens to sue abortion providers, as a cynical attempt to undercut federal rights. But then you called for a gun control measure modeled on the Texas law. Why?

We were very honest about that. The Supreme Court made a terrible decision in letting the Texas law stand, but I said this is a door they opened, and we’re going to walk through that door. I’m critical of that door being opened, but the reality at the end of the day is that if this court is going to sanction putting women’s lives at risk, we will take advantage of that door being open to save people’s lives by advancing our efforts on gun safety.

California is, at least for now, still a more expensive place to live than Texas and Florida. Are you worried that people will have to pay a premium in order to have their rights protected?

I often say: “We’re not going to be the cheapest place to do business. But we’ve consistently been the best place.” Our G.D.P. has outperformed most Western democracies. There’s a robustness to our approach, and it’s because of our values, not despite them.

That said, I’m deeply aware and have been working hard for the last three years to address the affordability in the state and the cost of living in this state with our efforts on housing. It’s right that the issue of homelessness — which is a pre-existing condition — is at crisis levels. And we have an obligation and responsibility to address that.

But California is one of many blue states. We’re not unique, and I wonder what world we’ll be living in in five years. The cost of living here is high, and we acknowledge we have work to do in that space. But there’s a maturity in California’s economy and democracy.

Today’s tip comes from Sherry Nelson, who recommends a spot in Humboldt County:

“My favorite secret hideaway is Trinidad on the Northern California coast, 15 miles north of Arcata. Trinidad is a small fishing port with timeless chill vibe.”

I’ll let the opening of this NPR article speak for itself: “When a stranger bumps into you, you might get an apology. LaQuedra Edwards got $10 million.”

Last November, Edwards was putting cash into a lottery ticket vending machine in Los Angeles when “some rude person” bumped into her, making her push the wrong button. But the accidental ticket she ended up with won her $10 million.

“I didn’t really believe it at first,” she said, but she got on the 405 freeway and kept looking down at the ticket, and “I almost crashed my car,” Edwards told NPR. She added, “I just kept thinking this can’t be right.”

Thanks for starting your week with us. I’ll be back tomorrow. — Soumya

P.S. Here’s today’s Mini Crossword, and a clue: “My little horse must think it ___ / To stop without a farmhouse near”: Robert Frost (5 letters).

Soumya Karlamangla, Jonah Candelario and Mariel Wamsley contributed to California Today. You can reach the team at CAtoday@nytimes.com.