Goodbye to a Yankee Farmer, the Ghost of Exit 8 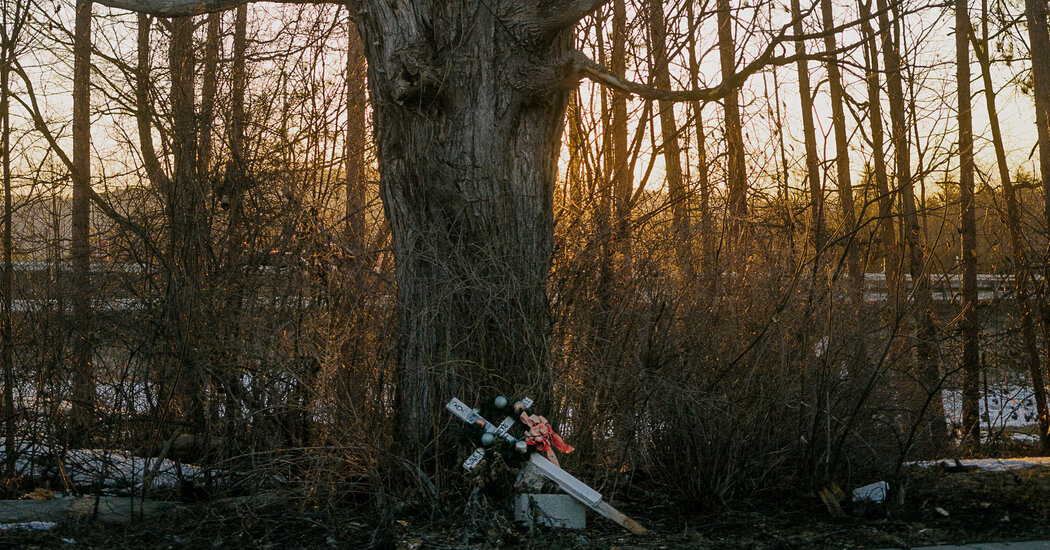 By 9 a.m., all that remained of the tree was six thick feet of trunk, as bare as a thumb.

When the crew ran chain saws all the way through the trunk — it measured 40 inches in diameter — nothing happened. The maple stood impassively.

They pounded felling wedges into the split, looped a line around the tree and began to tighten it. Then they backed up to a safe distance, and, with a creak and a thud, what remained of the Tenney tree came down. It rolled once, kicked forward by the force of its own falling weight, before coming to rest.

The last few spectators dispersed to the warmth of their cars.

Ms. Bearse took a branch to work with her to put in a jar of water, on the off chance that it would bloom. The Tenney relatives, now scattered across the country, had asked for pieces of the wood. Mr. Fuller went home empty-handed, thinking about all the things that were gone and would never come back.

To save what was left

A few days later, the town sent an employee to groom the space for the Romaine Tenney Memorial Park, a grassy lawn with a pavilion, a memorial plaque and a picnic table, funded with a $30,000 grant from the Vermont Agency of Transportation.

The job went to Steve Smith, who brought his excavator over from his house, on part of the old Tenney property.

Mr. Smith had been 8 the year Mr. Tenney died. His father was the superintendent for that section of the highway, and he used to tell stories about resistance from local landowners, including one farmer who shot a hole through a surveyor’s hard hat. That was his father’s world, the blasting and the crusher plants and the workers out all night, greasing equipment.

But when Mr. Smith, now 64, stood on the spot where the Tenney tree had been, he found himself unable to give the order to remove the stump.