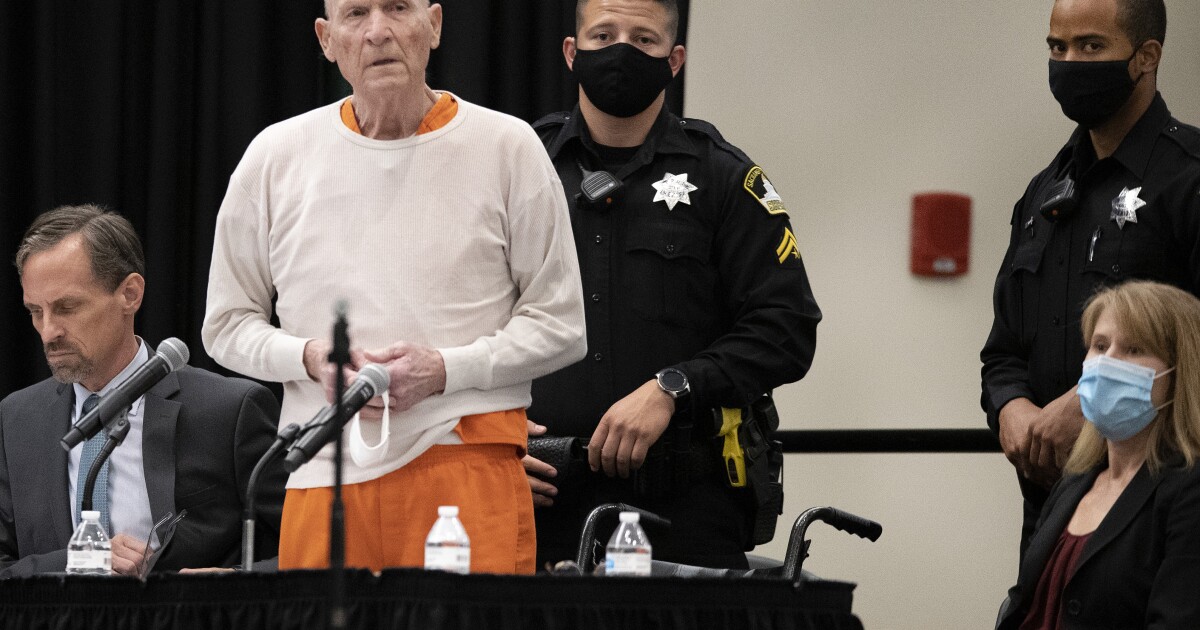 All that now awaits the Golden State Killer is an end of his days in prison.

A Sacramento County judge on Friday sentenced 74-year-old Joseph James DeAngelo Jr. to life without parole for killing 13 people and raping 50 in a series of break-ins that terrorized the state.

Judge Michael Bowman handed down the sentence in the ballroom at Sacramento State University, where DeAngelo, a former police officer, graduated nearly 50 years ago with a degree in criminal justice.

Among those in attendance for the filled-to-capacity proceedings were victims, family members, prosecutors from nearly a dozen counties — including the six prosecuting DeAngelo — former case detectives, and even newspaper reporters who covered the first of the crimes in the 1970s.

Before he was officially sentenced, DeAngelo rose easily from his wheelchair and began to speak.

“I’ve listened to all your statements, each one of them,” he said. “And I’m truly sorry to everyone I’ve hurt.”

Contra Costa County Dist. Atty. Diana Becton called DeAngelo “the boogeyman, the man whose horrific, unspeakable crimes devastated the lives of so many people, lives that will never be the same, lives forever changed, moments, hours of terror that can never be erased or forgotten.”

But as the historic criminal case comes to an end, victims and prosecutors have struggled with what constitutes justice after four decades of suffering and loss.

“To say our family is in grief is an understatement. Calling this true justice is probably an overstatement,” Bryan Sanchez, nephew of 1981 murder victim Greg Sanchez, told the judge this week during three days of impact statements.

“Justice is not possible in this case,” said Jennifer Carole, whose father, Lyman Smith, and his wife, Charlene, were murdered by DeAngelo. “And because of that, I can have no peace.”

DeAngelo’s 2018 arrest marked the first cold case in the nation to be solved by tracking a killer through the DNA of his family members on public genealogy sites.

Since his capture, he has admitted to crimes originally attributed to multiple assailants in the 1970s and ’80s, each with his own sobriquet — the Visalia Ransacker, East Area Rapist and Original Night Stalker. It wasn’t until DNA connected the crimes that the unknown attacker was rebranded the Golden State Killer.

“These rapes and these murders, in the words of our victims, have cut across families, friends, generations and entire communities,” Sacramento County Dist. Atty. Anne Marie Schubert said.

She added that “my greatest hope is perhaps put into their own words … the greatest revenge is to live your lives. Paint your children’s and your grandchildren’s rooms with hearts and rainbows” — a reference to the decor of a bedroom where one 13-year-old victim was attacked.

Schubert also drew applause, which neither the judge nor bailiffs moved to quell, in challenging DeAngelo’s appearance in court as old, wheelchair-bound and infirm. At a news conference after the hearing, she played several video clips showing him doing stretches and otherwise moving easily around his jail cell.

The counts against DeAngelo, detailing more than 100 criminal offenses, were so numerous that Bowman needed 22 minutes to read them aloud and impose the accompanying sentences, the maximum allowed under law after prosecutors had agreed not to seek the death penalty.

“The survivors have spoken clearly. The defendant deserves no mercy,” the judge said, drawing another round of applause.

Alice Michel, one of DeAngelo’s public defenders, acknowledged the pain her client had inflicted.

“We hope that, by admitting these offenses, Mr. DeAngelo has provided some peace to the survivors and their loved ones, and we hope that these proceedings have provided some relief.”

DeAngelo’s apology took his first rape victim, Phyllis Henneman, by surprise. However, she was not moved.

“They’re just words,” she said from her own wheelchair.

Immediately before issuing the sentence, Bowman made a few comments to DeAngelo about the words of his victims, citing their grace, strength and courage — “qualities you lack.”

He added that he “could not help but wonder, ‘What are you thinking? Are you capable of comprehending the pain and anguish you have caused?’”

Bowman also quoted John Steinbeck’s “East of Eden”: “To a criminal, honesty is foolish. You must not forget that a monster is only a variation, and that to a monster the norm is monstrous.”

“One thing I do know: When a person commits monstrous acts, they need to be locked away where they can never harm another person,” he said.

The crimes began as window peeping in DeAngelo’s hometown of Rancho Cordova. They progressed to bedroom burglaries and panty thefts in Visalia, and then the murder of a college instructor who caught the intruder attempting to abduct his daughter from her bedroom.

The rapes that ensued became more violent as DeAngelo began to attack couples together and, later, to kill them.

The investigations were often botched by law enforcement agencies refusing to cooperate, but the crimes also instigated major advances in criminal justice laws and tools. They were cited by women’s rights advocates to successfully increase the penalties for rape. A political crusade launched and funded by the family of murder victim Keith Harrington fueled a California law requiring felons to add their DNA to a databank used to hunt criminals.

Harrington’s older brother, Ron, used his victim statement in court this week to make the case for overriding privacy concerns and preserving police access to consumer genealogy sites, like the one detectives used to identify DeAngelo.

“It is so important for law enforcement to be allowed to solve cold cases using public access DNA sites,” he said.

As part of a plea deal with prosecutors, DeAngelo admitted to carrying out 53 attacks on 87 victims in 11 counties, starting in 1975 and ending with the rape and murder of a teenage girl in Orange County in 1986. Authorities believe he is also responsible for two more sexual assaults and a shooting for which he was not charged.

In exchange for his plea, prosecutors agreed to spare him the death penalty. He was sentenced to 11 life terms without the possibility of parole, to be served consecutively, plus 15 life terms and eight years.

Prosecutors from Ventura, Orange, Santa Barbara, Sacramento, Contra Costa and Tulare counties wrapped up a week in which victims recounted painful and often remarkable stories of human suffering and triumph with their own presentation on Friday.

There are circles upon circles of victims in the sprawling case, said Joyce Dudley, the Santa Barbara County district attorney.

“It wasn’t enough for him to rape or beat or shoot his victims,” she said. “He wanted to take inflicting human pain to the highest level possible. Therefore, he often ensured that their loved ones saw or heard their loved ones being killed. That’s who Joe DeAngelo is.”

While DeAngelo typically dragged women out of bed and away from their husbands to rape them in other rooms, crime scene evidence shows the couples he murdered died in bed beside one another. In one case, after bludgeoning a couple to death with a heavy piece of wood, he covered their naked bodies with a quilt and laid the bloody fireplace log on top.

The first murder victim was Claude Snelling, the college journalism instructor DeAngelo shot as Snelling interrupted the bedroom abduction of his 16-year-old daughter in 1975.

Orange County Dist. Atty. Todd Spitzer said Friday that he still believes “that this person — not even a person — this beast deserved the ultimate punishment of death,” but the extended time involved in bringing a capital punishment case to trial and through appeals made his execution unlikely, considering his age, and the toll on victims for all that time too great.

DeAngelo’s defense lawyers read aloud letters of anguish, support and love from family and friends who described a different side of the man now known to be the Golden State Killer.

Michel read a statement from a niece of DeAngelo, who called him “kind and loving” and her “favorite person.”

“He made my life peaceful. He is part of why I am a good, kind, loving person today,” the unidentified niece wrote. “This is my story. This is the truth. I am thankful I had him in my life. I wouldn’t be here today.”

Among those filing victim statements was DeAngelo’s ex-wife. Sharon Huddle lived with him during the rapes and murders of the 1970s and ’80s but moved out with their three daughters not long after. She finalized their divorce after his arrest.

“I have lost my ability to trust people,” Huddle wrote in a brief statement, telling the court DeAngelo’s crimes “have had a devastating and pervasive” effect on her and her family. “I trusted the defendant when he told me he had to work, or was pheasant hunting, or going to visit his parents hundreds of miles away.”

Huddle has remained silent most of the two-year court case, beyond expressing sympathy for victims shortly after DeAngelo’s arrest.

Huddle did not say what she wished to happen with her former husband. She instead concluded, “I wish that nothing I say here will detract from any other person’s impact statement.”