Ginsburg Will Lie in State in the Capitol, the First Woman to Be Given the Honor 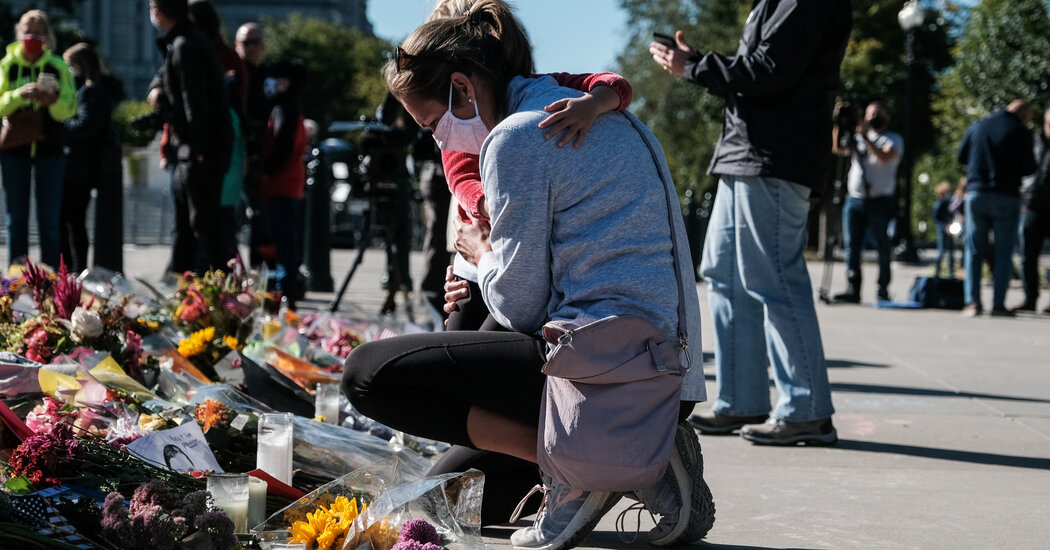 WASHINGTON — Justice Ruth Bader Ginsburg will lie in state in the United States Capitol’s Statuary Hall on Friday, an unusual honor for a Supreme Court Justice that has not been bestowed since the death of William Howard Taft, who served as chief justice from 1921 to 1930, after having served as president, and one that has never before been granted to a woman.

Speaker Nancy Pelosi announced the rare distinction on Monday after describing Justice Ginsburg’s death last week as “an incalculable loss for our democracy and for all who sacrifice and strive to build a better future for our children.”

The formal ceremony at the Capitol will be open to invited guests only because of the pandemic, Ms. Pelosi’s office said.

Also out of the ordinary, Justice Ginsburg will lie in repose at the Supreme Court for two days, on Wednesday and Thursday, and her coffin will be placed under the portico at the top of the building’s front steps, a setup meant to allow for social distancing.

In the past, justices have lain in repose in the Supreme Court’s Great Hall for only one day. But for a pioneering advocate of women’s rights, who was also a cultural icon and a liberal hero, the extra day was necessary to accommodate the number of people expected to turn out to honor her.

Justice Ginsburg died Friday, and over the weekend, the sidewalk in front of the court became an ever-growing vigil. Flowers, handwritten notes, candles and messages written in chalk wrapped around the side of the building, and large crowds gathered to pay their respects.

The vigil also served as a way to motivate progressive voters before the election in 43 days, suddenly driven by an existential fear that the Supreme Court could be lost for a generation.

On Saturday night, Senator Elizabeth Warren, Democrat of Massachusetts, led hundreds gathered in front of the Supreme Court in a chant of “I will fight.”

President Trump said Monday he would wait until after Justice Ginsburg’s funeral to name his nominee to succeed her, in order to “pay respect.” But in the same interview, he claimed, with no evidence, that Justice Ginsburg’s “dying wish” that she would not be replaced until a new president was installed might actually have been written by a top Democrat like Representative Adam B. Schiff of California, Senator Chuck Schumer of New York or Ms. Pelosi of California.

The White House said on Monday that Mr. Trump planned to pay his respects in person at the Supreme Court, as President Barack Obama and his wife, Michelle Obama, did in 2016 when Justice Antonin Scalia, a conservative icon, died. The Obamas were criticized, however, for skipping his funeral and sending Vice President Joseph R. Biden Jr. instead.

The campaign of Mr. Biden, now the Democratic presidential nominee, has not said whether he planned to travel to Washington to pay his respects to Justice Ginsburg.

During the ceremonies at the Supreme Court, Justice Ginsburg’s former law clerks will serve as honorary pallbearers and line the front steps as her coffin arrives, the court announced Monday. A 2016 portrait of Justice Ginsburg will be on display inside the court, and the coffin, as is customary, will be placed on the Lincoln catafalque, which was used for President Abraham Lincoln’s coffin when his body lay in state in the Capitol Rotunda in 1865.

A private ceremony in the court, which will be open only to Justice Ginsburg’s family, close friends and members of the court, will take place on Wednesday morning inside the Great Hall, the court announced on Monday.

A private interment service will be held next week at Arlington National Cemetery, where Justice Ginsburg’s husband, Martin D. Ginsburg, was buried in 2010.