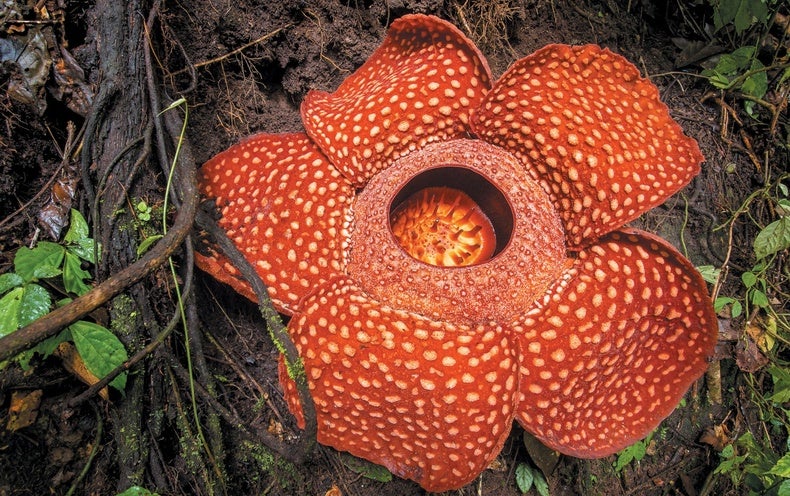 Little is known about how the parasitic Rafflesia—a genus that produces the world’s largest and stinkiest flower—infects its host plants. Rafflesia spends most of its life span as a tangle of strandlike cells lurking inconspicuously underneath the bark of a woody vine called Tetrastigma, before emerging as drab, golf ball–sized buds. These eventually burst into fleshy blooms that smell like rotting meat and can reach 20 pounds and three feet across. Since 2017, Long Island University plant biologist Jeanmaire Molina has been trying to infect Tetrastigma seedlings with Rafflesia seeds in the laboratory, so far without success; her latest work delves further into how some potential hosts manage to thwart this spectacular parasite.

For a new study in Planta, Molina and her colleagues extracted and screened over 10,000 chemicals produced by infected and noninfected Tetrastigma cuttings from rain forests in the Philippines. The researchers found that noninfected cuttings contained elevated levels of benzylisoquinoline alkaloids, a group of compounds that includes morphine and codeine.

Such substances have never been reported before in Tetrastigma or other creepers in the same family (which includes the common grape). Molina says she is intrigued that Tetrastigma can produce such biologically potent substances, and the precise reasons it does so are not yet known. She suspects Tetrastigma may brandish these alkaloids preemptively to stave off infection. Perhaps, she adds, Rafflesia’s opening gambit is to suppress this secretion and besiege its host.

In any case, the finding is “pretty surprising,” says Harvard University evolutionary biologist Charles Davis, who was not involved in the study. “Plants are incredible chemists.” He adds that the work is an important step toward demystifying interactions between parasite and host.

Next, Molina hopes to learn how to tip the balance toward Rafflesia. Her long-term goal is to bring some of these endangered flowers out of their Southeast Asian habitats and make them more accessible to the outside world. Learning how Tetrastigma’s defenses work—and how to subvert them—is a place to start.

Molina keeps a potted Tetrastigma in her university office, regularly sprinkling the plant with Rafflesia seeds in the hope they will miraculously catch. So far, nothing. But she still maintains the routine. “I think there is a way. We just don’t know it yet,” she says. “We’ll get there somehow.”