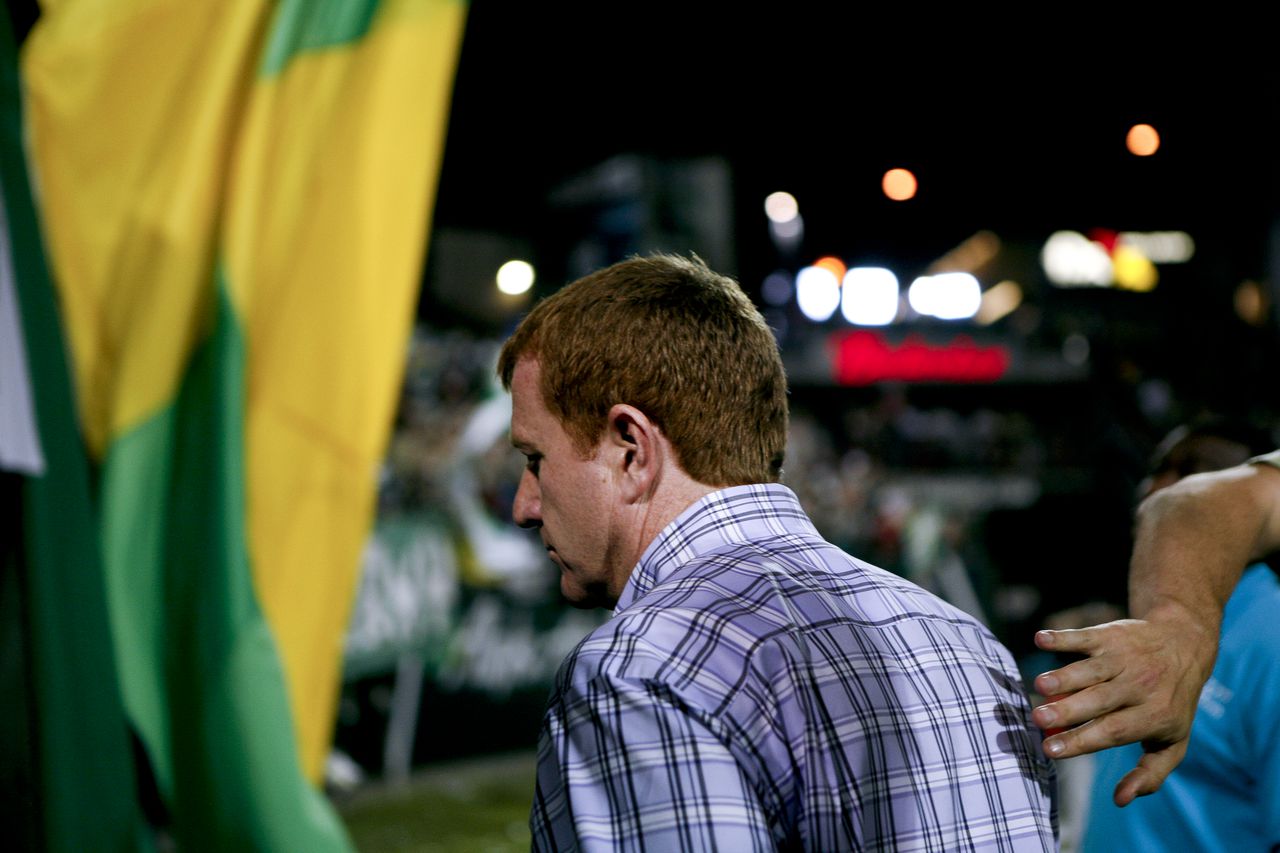 Gavin Wilkinson, longtime general manager and president of soccer for the Portland Timbers and Thorns, and longtime president of business Mike Golub were fired Wednesday, two days after the U.S. Soccer Federation revealed damaging details of a yearlong investigation into alleged misconduct and abuses across the National Women’s Soccer League.

The news comes amid widespread criticism of owner Merritt Paulson and the club executives in the wake of U.S. Soccer’s findings, with fans threatening to boycott matches and sponsors reevaluating partnerships with the clubs.

In a release announcing the firings Wednesday morning, the Timbers and Thorns — referred to as PTFC — said that general counsel Heather Davis has been named interim president of the teams’ parent company, Peregrine Sports, and would oversee business operations for both clubs. Additionally, Ned Grabavoy will continue to serve as technical director and lead the Timbers’ soccer operations, while Thorns GM Karina LeBlanc will remain in her role guiding the club’s soccer operations.

Paulson, who has faced calls from fans and media to sell the clubs, said Tuesday he would step aside from all Thorns-related decision making but planned to remain involved with the Timbers.

“It’s been a tough week, a tough day,” Timbers coach Gio Savarese Wednesday, following a training session in Beaverton. “Just a difficult time and a lot of overwhelming information. We feel for the victims of everything that has been said and everything that has come out.

The U.S. Soccer investigation exposed, among other things, that Wilkinson and Paulson enabled and vouched for former coach Paul Riley, who was accused by multiple players of sexual misconduct, even though they quietly fired him from his job with the Thorns in 2015.

Golub, 61, was found by U.S. Soccer to have made an inappropriate sexual remark to former Thorns coach and now-U.S. Soccer president Cindy Parlow Cone, which came on the heels of allegations by former employees that Golub fostered a toxic work environment, as detailed in a report by The Oregonian/OregonLive.

In his 13 years with the organization, Golub helped lead myriad charitable endeavors — including an off-field initiative Stand Together — the expansion of Providence Park, the successful navigation of COVID-19 shutdowns, and significant growth in popularity and revenue for both clubs.

Wilkinson, 48, joined the Timbers organization in 2001 as a player when it competed in the USL, and later coached the club from 2007 to 2010. When Portland joined Major League Soccer in 2011, Wilkinson took over as the club’s general manager and he served in that role and/or as president of soccer until his dismissal Wednesday.

Wilkinson also served as general manager of the Thorns when they joined the NWSL in 2013, and quickly helped build the club into a winner, setting the foundation for success that included multiple NWSL Shields and championships.

Also, in 2012, Wilkinson filled in as interim head coach of the Timbers after drawing fan criticism for the team’s poor performance. The club later hired Caleb Porter, who went on to lead the Timbers to an MLS championship in 2015. His relationship with the front office eventually soured, however, and led to his departure for the Columbus Crew.

Wilkinson, famously outspoken in the media for better or worse, also presided over several high-profile signings for both teams, including club legends like Diego Valeri, Sebastian Blanco and Diego Chara on the Timbers’ side along with international superstars like Christine Sinclair, Becky Sauerbrunn and Alex Morgan for the Thorns.

But when allegations against Riley came to light in 2021, Wilkinson was put on leave from his position with the Thorns and ultimately was replaced as general manager by Karina LeBlanc. He continued to work for the Timbers in his full capacity, however, and — after an an internal investigation by the Thorns cleared him of wrongdoing in 2022 — he was reinstated by the Thorns and served as president of soccer for both clubs.

During Wilkinson’s tenure, the Timbers won an MLS Cup in 2015 and played for the MLS championship two other times (2018, 2021). The Thorns won the NWSL championship in 2013 and 2017, and they also secured a NWSL Shield in 2016 and 2021. Wilkinson had a crucial role in establishing the club’s academy system at the youth level on up.

He founded the Eastside Timbers FC youth soccer club in 2001 and has worked with the club in various leadership capacities since. Eastside’s under-18 squad won the U.S. youth soccer national championship in 2010, becoming the first Oregon team since the 1990s to do so.

“We have had the support of Gavin in the five years that I’ve been here, from the staff, everyone,” Savarese said of Wilkinson. “This is a difficult time for all of us.”

Wilkinson’s impact on the organization from a soccer perspective — top to bottom, from the youth level to the personnel of the first team — was immense and successful, but his final years at the helm were rife with off-field controversy.

His role in the Riley scandal came into question after a report from The Athletic last year, and fans and players expressed frustration surrounding an alleged conversation he had with Mana Shim — one of Riley’s alleged victims — about her sexuality. Wilkinson also came under fire for his handling of domestic violence allegations against former Timbers player Andy Polo.

U.S. Soccer found that Wilkinson blamed Shim for “putting Riley in a bad position” and told another NWSL club that he would “hire him in a heartbeat,” among other issues with his involvement. Fans this week turned to social media to voice their displeasure, calling for Wilkinson and Golub to be fire, and for Paulson to sell the Timbers and Thorns.

“I understand that we need to evolve as a club and we need to take big steps forward,” Wilkinson said at a town hall discussion with Timbers season-ticket holders in February. “For me, it’s about compliance with all of these things and making sure we’re a positive representation. I also do think that if those investigations and those findings show that we did something poorly, as an organization we have to take responsibility and we have to take action. Whether that action is termination or discipline, we will act the right way.”

This story will be updated as more information becomes available.