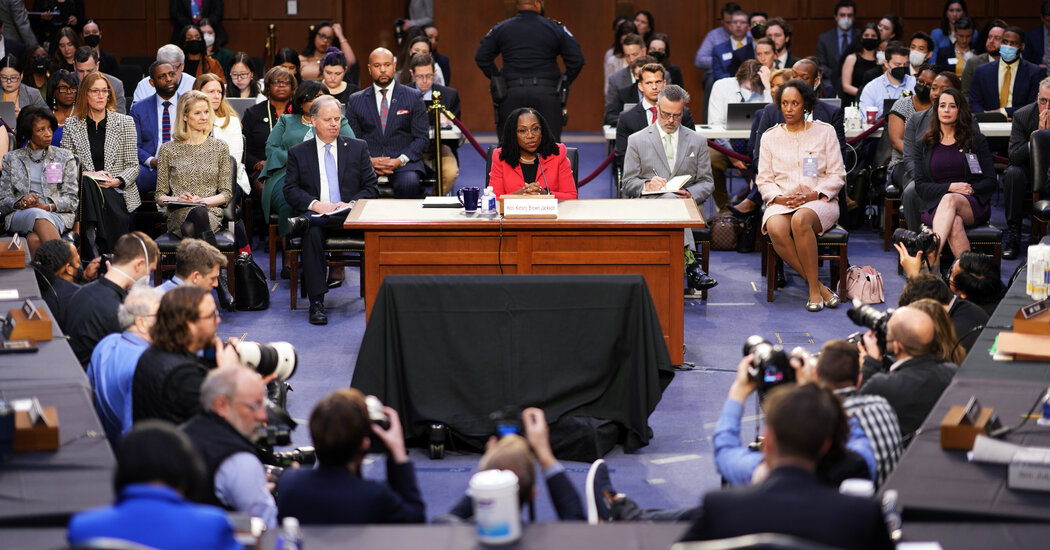 As they begin questioning Judge Ketanji Brown Jackson on Tuesday, Republican senators are previewing many of the attack lines their party plans to use in the midterm congressional elections to portray Democrats as extremists.

The televised hearings serve as a high-profile opportunity for Republicans to air cultural grievances that motivate their hard-right base, such as antiracism efforts and transgender rights, as they work to tarnish Judge Jackson in the eyes of the public and generate enthusiasm among voters outraged at her likely elevation to the court.

In a release on Monday morning, just as the hearings were beginning, the Republican National Committee painted Judge Jackson as a radical left-wing activist and proselytizer of critical race theory. The term refers to a field of legal study that examines how racism can be embedded in laws and institutions, but has been appropriated by the right as a way to disparagingly describe any discussion of structural racism.

The R.N.C. also blasted Judge Jackson for praising The 1619 Project, a series of essays in The New York Times Magazine that reframed the country’s history by putting the consequences of slavery at the center of the national narrative. The project, which was praised by some historians and expanded into a curriculum and best-selling book, has been broadly dismissed by Republicans as “brainwashing,” and G.O.P. state legislatures have tried to penalize schools that teach it.

An administration official said that Judge Jackson’s reference to The 1619 Project was part of a speech she gave on the history of the civil rights movement, during which she called it “provocative.” The official said that her reference to critical race theory was made in comments to students about academic areas they might find interesting, including administrative law, constitutional law, negotiations, and contracts.

“Is it your personal hidden agenda to incorporate critical race theory into our legal system?” Ms. Blackburn asked Judge Jackson. “These are answers that American people need to know.”

Ms. Blackburn also said she was concerned that Judge Jackson sits on the board of a liberal-leaning private school in Washington, Georgetown Day School, which she claimed taught five-year-olds that they could choose their gender and educated them about what she branded “so-called white privilege.”

“This school has hosted an organization called ‘Woke Kindergarten’ and pushes an anti-racist education program for white families,” Ms. Blackburn said, calling it “progressive indoctrination of children” that raised concerns about how Judge Jackson might rule in cases involving parental rights.

She also implied that Judge Jackson had pushed for transgender rights and decried that “educators are allowing biological males to steal opportunities from female athletes in the name of progressivism.”

C.R.T. is not new. Derrick Bell, a pioneering legal scholar who died in 2011, spent decades exploring what it would mean to understand racism as a permanent feature of American life. He is often called the godfather of critical race theory, but the term was coined by Kimberlé Crenshaw in the 1980s.

The theory has gained new prominence. After the protests born from the police killing of George Floyd, critical race theory resurfaced as part of a backlash among conservatives — including former President Trump — who began to use the term as a political weapon.

The current debate. Critics of C.R.T. argue that it accuses all white Americans of being racist and is being used to divide the country. But critical race theorists say they are mainly concerned with understanding the racial disparities that have persisted in institutions and systems.

A hot-button issue in schools. The debate has turned school boards into battlegrounds as some Republicans say the theory is invading classrooms. Education leaders, including the National School Boards Association, say that C.R.T. is not being taught in K-12 schools.

It was not clear how the issue related to Judge Jackson, or when or if she had ever made any comments on the issue of transgender rights.

But other Republicans also stoked fears about what potentially controversial views Judge Jackson might bring with her to the high court, calling upon issues that might scare voters.

Senator Josh Hawley, Republican of Missouri, reiterated his attack that Judge Jackson had been soft on child sex abusers. The attack touched on the central allegation of the viral pro-Trump conspiracy theory known as QAnon, which spreads false claims that Democrats are part of a cabal of Devil-worshipping pedophiles.

That didn’t stop more than a dozen G.O.P. House members, including Representative Elise Stefanik, the No. 3 Republican in the House, from signing a letter raising concerns about what they called her “troubling pattern of leniency” when it came to sentencing for child sex crimes.