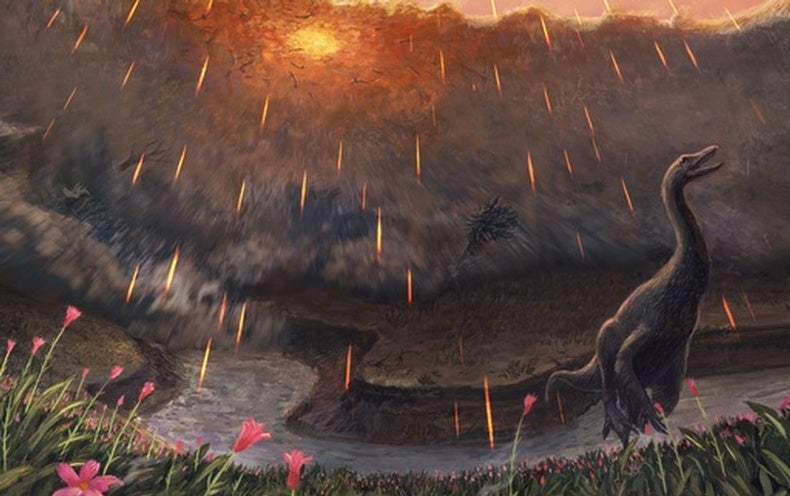 Spring is a time for budding flowers, tender green leaves and baby animals. But 66 million years ago, that gentle season instead brought mass death and carnage from Earth’s catastrophic impact with a massive space rock.

Earth was forever changed after an enormous asteroid smashed into our planet at the end of the Cretaceous period (145 million to 66 million years ago), triggering a global extinction that wiped out 76% of life on Earth, including all nonavian dinosaurs, pterosaurs and most marine reptiles. Scientists recently pinpointed the season of the disaster and linked it to springtime in the Northern Hemisphere, after analyzing fossilized animals that died minutes after the impact.

They found the fossils at a site called Tanis, where a river once flowed through what is now North Dakota. After the asteroid struck near Mexico’s Yucatán Peninsula, the shock sent powerful waves roaring upstream toward Tanis, sweeping up fish and forest creatures and burying them alive under layers of soil. When the water subsided, it left behind an astonishingly well preserved 3D snapshot of destruction, captured within 30 minutes after the asteroid struck, the researchers reported in a new study. Fossils of those filter-feeding fish also held clues about their seasonal growth cycles, hinting that spring had sprung when the fish died and the dinosaurs‘ reign abruptly ended.

The moment of mass, instantaneous death preserved in Tanis, with broken and splintered fish fossils wrapped around tree branches and strewn in all directions, “was like the worst car crash you’ve ever seen, frozen in place,” said lead study author Melanie During, a doctoral candidate in the Department of Organismal Biology at Uppsala University in Sweden. It was also “the most spectacular deposit I’ve ever seen in my life,” During said at a news conference on Feb. 22.

During excavated Cretaceous fish at Tanis in August 2017, spending two weeks digging out fossils of paddlefish and sturgeons. Fish skeletons — even after fossilizing — retain records of an animal’s growth, which depends on seasonal food availability. By mapping these patterns in bone cell growth and density, the scientists hoped to identify which part of the growth cycle the Tanis fish had reached when they died, which could indicate what time of year it was.

The study authors scanned the fossils using synchrotron X-ray imaging, nondestructively imaging and reconstructing the fossils in 3D. They found tiny glass balls called spherules embedded in the fishes’ gills; these small spheres fused from ultrahot sediments when the asteroid struck and ejected towering plumes of dirt from the impact crater. Particles flew into Earth’s atmosphere and beyond and then rained back down on the planet as glassy beads.

Other researchers who studied Tanis’ Cretaceous death pit calculated that impact spherules would have fallen between 15 and 30 minutes after the asteroid crashed into Earth. Because spherules were in the fishes’ gills but had not been swallowed, the fish were likely buried alive immediately after inhaling the glassy beads — within 30 minutes after the asteroid impact, according to the new study.

Synchrotron scans also revealed signs of cell growth fluctuations in the fossilized bones, taking place over seven years. Much as trees mark the passage of time in the accumulation of rings, which are visible in cross sections of their trunks, fish add layers to their bones as they age, with growth peaking by the end of the summer and then declining over the winter. When the fish died, they were just entering a time of significant bone growth — which coincided with spring, study co-author Dennis Voeten, a research engineer at Uppsala University’s Department of Organismal Biology, said at the news conference.

“I think it makes sense to everyone that when a fish eats, its bone grows,” During told Live Science in an email. However, seeing this quantified in Cretaceous fossils “is really new and unbelievably informative for future studies,” she said.

Records of carbon isotopes, or variations of the element carbon, from one of the fishes further confirmed that the fish died in springtime, the scientists wrote in the study. Like bone growth, “the carbon isotope record shows a distinct cyclic pattern, where high values reflect high productivity of plankton,” which was the main food for paddlefish, said study co-author Jeroen van der Lubbe, an assistant professor in the Department of Earth Sciences at the Vrije Universiteit Amsterdam in the Netherlands. Plankton abundance is typically highest in summer; the isotope analysis showed that plankton productivity hadn’t yet peaked for the year, so the researchers concluded that the fish perished in the spring, van der Lubbe said at the news conference.

The timing of the asteroid impact likely had far-reaching consequences, with some species on Earth being better equipped to weather the disaster simply because of what season it was in their part of the world, the researchers reported.

Organisms in the Northern Hemisphere, where spring was warming things up, were likely just emerging and were primed for growth and reproduction after the cold winter months. They would have been exposed and had fewer resources, having already depleted whatever stored reserves helped them survive the winter. A springtime ecosystem could therefore have been more vulnerable to the immediate effects of the impact than plants and animals in the Southern Hemisphere that were hunkering down for winter, During said.

“After the impact, a sudden cooling of unknown duration took place — which, of course, had its own influence on the extinction pattern,” During said. “Nevertheless, it is clear that the organismal groups that did not survive that catastrophic spring/autumn would not have been around to fight in the subsequent nuclear winter to begin with.”

The findings were published online Wednesday (Feb. 23) in the journal Nature.

Copyright 2022 LiveScience, a Future company. All rights reserved. This material may not be published, broadcast, rewritten or redistributed.