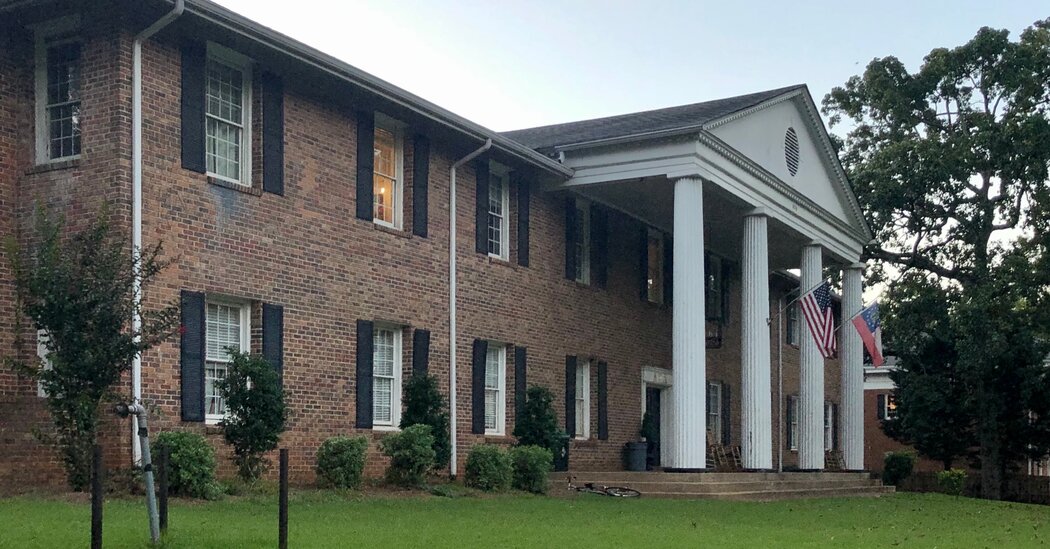 As the coronavirus spread around the University of Georgia and her fellow students partied, Arianna Mbunwe, a junior, took to Twitter to call them out.

“GETTING COVID-19 w the GIRLYS,” she said in one post, mocking sorority sisters who were posing for photos, without masks, in a bar.

She had been tipped off to the pictures as her account became an impromptu source for critiques on other students’ coronavirus practices. (Later, one of the women in Ms. Mbunwe’s post messaged her threatening to sue.)

“Lambda Chi it would be a shame if someone found out about your little parties,” Ms. Mbunwe said in another Twitter post of a message that said the Lambda Chi Alpha fraternity’s chapter at the university was hosting parties.

But it was a tip unrelated to masks or parties that led to the suspension of the university’s Lambda Chi Alpha chapter. Ms. Mbunwe, 20, who is Black, received screen shots of a group message that included members of the fraternity making racist statements about her.

“Definitely another black girl,” one person said. “Lord give me the strength to not call that woman a racial slur,” said another, according to the screen shots Ms. Mbunwe posted on Saturday.

“What a foul, miserable creature,” said a message attached to a photo of Ms. Mbunwe.

One person, whose user name was “Ghost of Aunt Jemima,” made a comment speculating about Ms. Mbunwe’s genitalia and said she was “mad she didn’t get a bid,” a reference to the selection process for sororities and fraternities.

The fraternity’s national organization said on Monday that it had “immediately suspended” the University of Georgia chapter, and that the fraternity would coordinate with “local authorities” and “take all appropriate steps to restore decency, dignity and integrity to our Lambda Chi family.”

The screen shots of the group chat — which was named “Sex Drugs and Darby House” — also showed messages that did not mention Ms. Mbunwe but further displayed racist and insensitive language.

The “Ghost of Aunt Jemima” texted the group a photo of a woman, taken from afar in a public space, with the caption, “Very nice indian.” The screen shots showed a discussion among three people about the fraternity paying for strippers, “midget strippers” and “midget wrestling.”

The university said in a statement on Monday that it was aware of “outrageous and offensive comments involving members of a student organization.”

The matter is “now being investigated by the University’s Equal Opportunity Office in accordance with our Non-Discrimination and Anti-Harassment (NDAH) policy,” the university said.

On Tuesday, Ms. Mbunwe shared on Twitter an email she received from the university’s Equal Opportunity Office, in which the office’s associate director, Kristopher Stevens, compared her tweets critical of “all white sororities” to the comments Ms. Mbunwe had reported to his office.

“It concerns me that you do not know the basic definition of discrimination,” Ms. Mbunwe said in an emailed reply to Mr. Stevens. “Further to my point you do not understand that reverse racism does not exist.”

Mr. Stevens and a university spokesman did not immediately respond to requests for comment about the email exchange.

Ms. Mbunwe said in a text message to The New York Times on Tuesday that she wanted the students who were involved to be expelled and for the fraternity’s charter at the university to be revoked.

In response to questions about Ms. Mbunwe’s request for disciplinary action, the university spokesman referred The Times to the university’s previous statement and said that the matter was under investigation.

Lambda Chi Alpha’s general counsel, Lynn Chipperfield, said that an investigation into the chapter began on Monday morning and that disciplinary action would depend on “the nature of what happened and who was involved.”

He added that he did not yet know how many individuals in the chapter were involved in the matter.

“This is not conduct that we tolerate,” he said.

Ms. Mbunwe said she had heard from the fraternity. “However,” she added, “their public apology was the same as the ‘personal’ one they sent to me.”