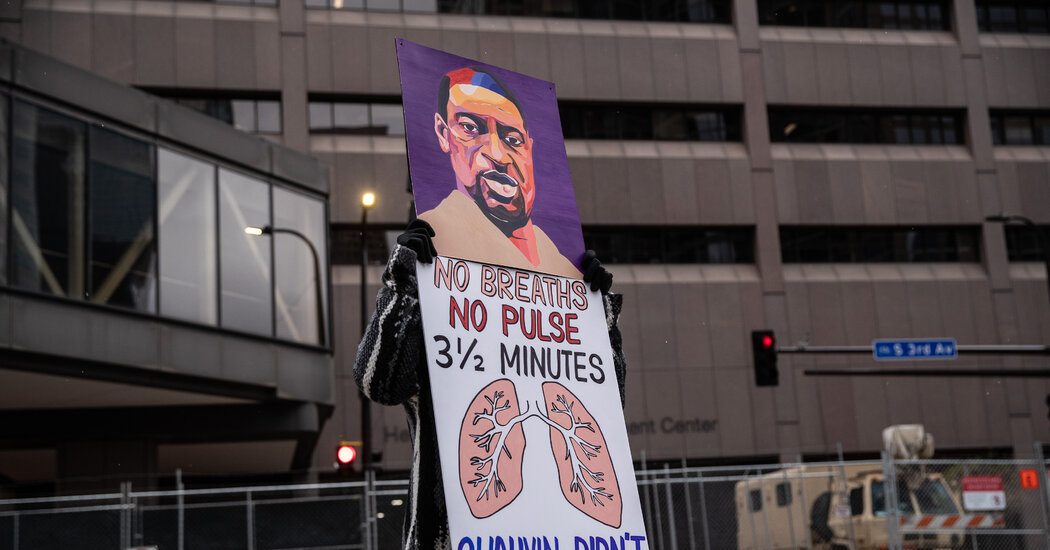 ST. PAUL, Minn. — The defense cases in the federal trial of three former Minneapolis police officers accused of crimes in the death of George Floyd concluded on Monday with a common theme: that they were not guilty because their training led them to trust the senior officer at the scene, Derek Chauvin, who pressed his knee to the neck of Mr. Floyd for more than nine minutes until he stopped breathing.

The three former officers — Tou Thao, 36; J. Alexander Kueng, 28; and Thomas Lane, 38 — are accused of violating Mr. Floyd’s constitutional rights by not intervening against Mr. Chauvin and by failing to provide Mr. Floyd with medical care. All three testified in their own defense.

With the completion of testimony on Monday, the jury will hear closing arguments from the prosecution and each of the defense lawyers on Tuesday, and then begin its deliberations.

During his murder trial last year, Mr. Chauvin called on a paramedic, police officers, an eyewitness and a former medical examiner to testify on his behalf, but he did not take the stand. He was convicted in state court of murder and was sentenced to 22 and a half years in prison.

The three other officers at the scene that day, until now largely peripheral characters in a long national trauma set off by the killing of Mr. Floyd in 2020, relied almost entirely on telling their own stories to defend themselves at trial.

One after the other, starting last week, the three former officers took the witness stand in the federal courthouse in St. Paul, Minn., and explained what they were doing and thinking when they responded to a call from a convenience store clerk who said that Mr. Floyd had used a fake $20 bill to buy cigarettes.

The first two officers on the scene — Mr. Kueng and Mr. Lane, who were both in their first week on the job as full officers — struggled to arrest Mr. Floyd, who repeatedly said he was claustrophobic and did not want to be placed in the back of a police car.

The officers testified that they were worried Mr. Floyd was exhibiting symptoms of a drug overdose and was in a highly agitated state. They said that keeping him restrained face down, even though he said over and over that he couldn’t breathe, was necessary, in part to protect Mr. Floyd from hurting himself. The scene was far more chaotic, and possibly more dangerous to the officers, than the video footage in evidence suggested, they said.

But most of all, they said, they trusted that Mr. Chauvin, the senior officer present, had things under control.

“I think I would trust a 19-year veteran to figure it out,” Mr. Thao testified.

The officers’ testimony came at the end of a monthlong trial that represented a rare example of a civil rights case being pursued by the Justice Department against officers for failing to intervene against a fellow officer who was using excessive force.

Such cases have been rare, partly because it is difficult to prove “willfulness,” which implies some form of intent, or at least the knowledge that what officers were witnessing was unlawful. For a jury to decide the three officers are guilty, it would need to determine that the officers knew in the moment that Mr. Chauvin was using excessive force, and that Mr. Floyd was in a serious medical crisis.

And so the officers, in their testimony, walked a fine line as they tried to blame Mr. Chauvin — saying, in effect, that they trusted in Mr. Chauvin’s actions because of his experience — without acknowledging that they were aware that Mr. Chauvin was acting unlawfully.

Police culture on trial. The federal civil rights trial of three former officers for their role in the killing of George Floyd centers on a crucial issue in American policing: the duty of officers to intervene against fellow officers when they witness misconduct.

A new focus. Ever since the murder of Mr. Floyd almost two years ago, the overwhelming focus has been on the officer who killed him, Derek Chauvin. While Mr. Chauvin was convicted of murder in a state trial last spring, he wasn’t the only officer there that day.

Who are the officers on trial? Three officers are accused of willfully failing to intervene against Mr. Chauvin and help Mr. Floyd. Tou Thao, a veteran officer who was Mr. Chauvin’s partner, held back a group of bystanders. J. Alexander Kueng and Thomas Lane — both rookies — helped pin down Mr. Floyd.

What are the charges? The charges concern whether the defendants deprived Mr. Floyd of his civil rights. All three officers are charged with failing to provide medical aid to Mr. Floyd, while Mr. Kueng and Mr. Thao also face a count of failing to intervene with Mr. Chauvin’s use of force.

“He was my senior officer, and I trusted his advice,” Mr. Kueng said.

Officers have an obligation to intervene against other officers who are committing crimes. But that obligation is often ignored, experts say, because of a culture of policing that emphasizes loyalty and discourages officers from speaking out against one of their own.

Mr. Thao and Mr. Kueng are charged with two counts — for failing to intervene against Mr. Chauvin and for not providing medical care to Mr. Floyd. Mr. Lane, who twice asked Mr. Chauvin during the episode if they should roll Mr. Floyd on his side, is charged with one count of failing to render medical aid.

From the start, the trial focused on the way police culture prizes loyalty to other officers above all else — the so-called blue wall of silence. Prosecutors sought to portray the defendants as ignoring their constitutional duties out of deference to a senior officer.

But the defense tried to seize the issue of culture in policing to its own advantage, arguing that the Minneapolis Police Department’s training procedures were rife with paramilitary aspects, with recruits being taught to march in formation and with obedience to superiors being seen as a guiding principle.

Mr. Kueng testified that instruction on the duty to intervene had been brief and perfunctory.

The three officers still face a trial in state court on charges of aiding and abetting murder that is scheduled for June.