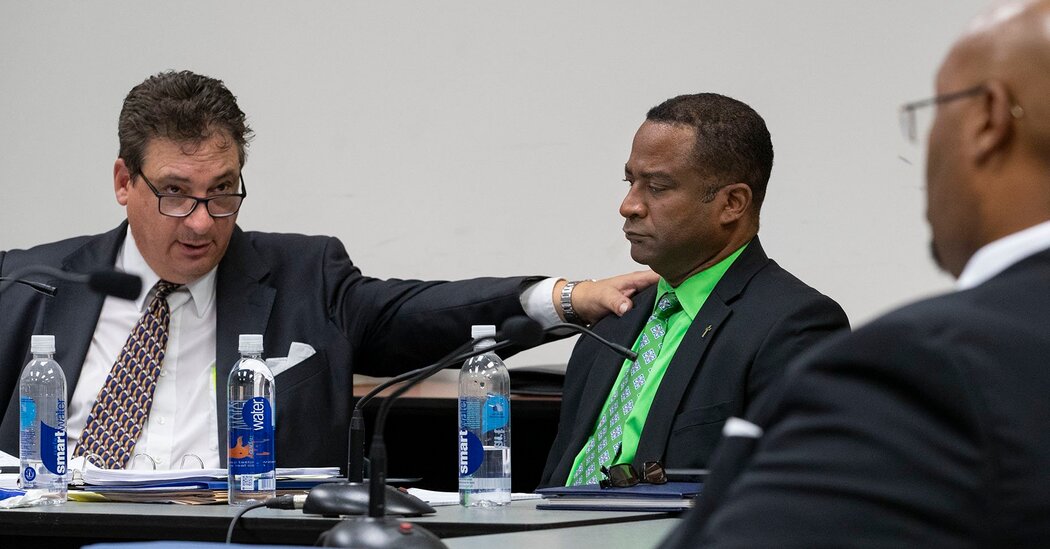 MIAMI — A high school principal in Florida whose 2018 exchange with a parent about whether the Holocaust was “a factual, historical event” led to an uproar, his firing and a case before a judge, was reinstated Wednesday after a school board vote.

The Palm Beach County school board voted 4 to 3 on Wednesday to rehire the principal, William Latson, who was removed from his post last year at Spanish River Community High School in Boca Raton after an email exchange with a student’s parent came to light. He will also receive full back pay of about $152,300, according to the board, which adopted the recommended order of an administrative law judge.

Mr. Latson will be transferred to a position within the district that is “commensurate with his qualifications,” the board decided. A spokeswoman for the district said he would not return as the principal of Spanish River, and instead would be assigned a position outside a campus setting.

“Many have condemned him as a Holocaust denier,” Mr. Latson’s lawyer, Thomas Elfers, said in a statement. “He isn’t. He never was. He is a great guy and a great educator.”

Mr. Latson oversaw Spanish River High until he was reassigned in July 2019, after his email exchange with a parent drew an intense backlash in South Florida.

“I can’t say the Holocaust is a factual, historical event because I am not in a position to do so as a school district employee,” Mr. Latson wrote in one of the emails, which were obtained by The Palm Beach Post. Mr. Latson said he had to stay “politically neutral” and separate his personal views about the Holocaust from his job as a public school official.

The publication of Mr. Latson’s emails drew national attention, and renewed a long and sometimes bitter debate about the responsibilities of educators at state schools. The school board was still divided at Wednesday’s vote.

“I am not defending his stupid statements,” a school board member, Debra Robinson, said at the meeting. “They actually disgust me, but I don’t think his statements represent the body of his work.”

Another school board member, Karen Brill, said his rehiring “is going to be a stain on this school district that will never go away, and it’s not just a local stain in Palm Beach County, it’s a national stain.”

For about 90 minutes during the meeting, callers, including Jewish people and relatives of Holocaust survivors from around the country, urged the school board in recorded messages not to reinstate the principal.

The regional director of the Anti-Defamation League in Florida, Sheri Zvi, said on Thursday that the group was disappointed that Mr. Latson would be reinstated because of his “disturbing comments about the Holocaust and his failure to take responsibility for them.”

“We continue to believe that he should not be part of the Palm Beach County school system,” she said.

Mr. Latson had been fired in late 2019, after the board voted 5 to 2 to accept the recommendation of the district superintendent, Donald E. Fennoy II, to remove him. Mr. Latson requested a hearing before a judge, and the case moved to the Division of Administrative Hearings in Tallahassee, Fla.

This August, Judge Robert S. Cohen concluded that Mr. Latson should have been reprimanded or reassigned to another position at the Palm Beach County school district, but not fired.

The school district failed to prove that Mr. Latson had “engaged in misconduct in office, incompetence, or gross insubordination by a preponderance of the evidence,” the judge wrote in his order.

The judge said that Mr. Latson had “communicated well with students, teachers, and parents, except for the one parent.” He also said that the principal’s “choice of words and methods of trying to express that everyone at S.R.H.S. has the right to their individual beliefs, even if they differed from the required, approved curriculum were unfortunate.”