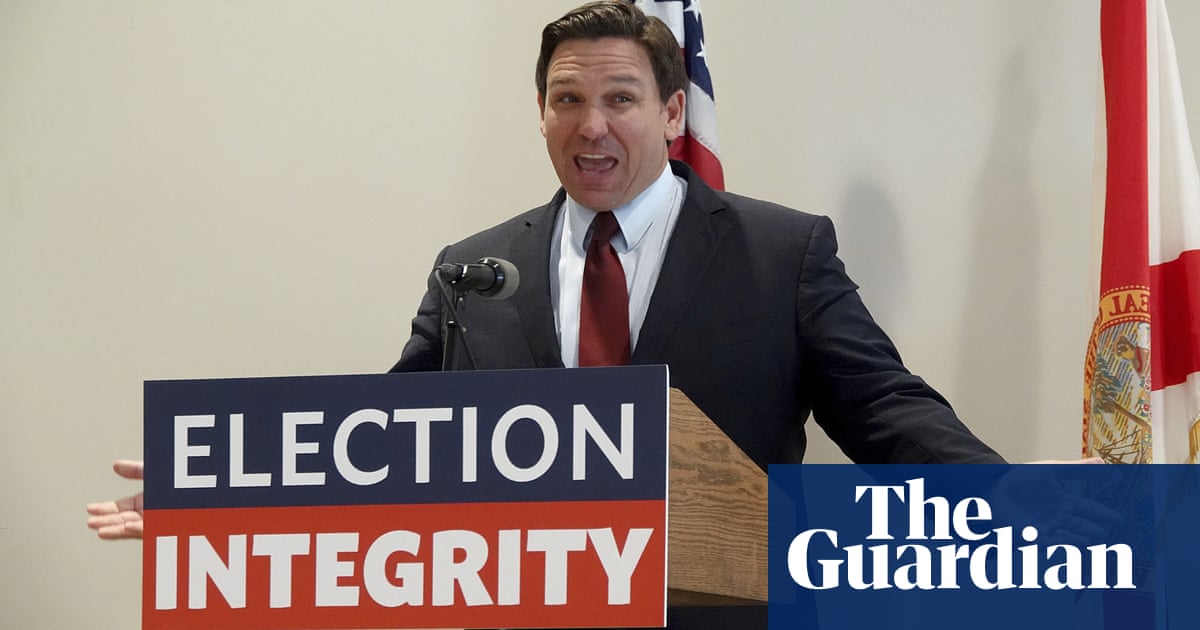 The Florida legislature will allow Governor Ron DeSantis to take the lead on redrawing the state’s 28 congressional districts, a highly unusual move that will probably diminish Black political power in the state and allow Republicans to further distort the state’s map to their advantage.

State legislatures, including Florida’s, usually draw a proposal for a plan that the governor approves or rejects. DeSantis vetoed the GOP-controlled legislature’s proposed congressional districts on 29 March after proposing his own map that would increase the number of GOP seats while eliminating two districts represented by Black Democrats. Leaders in the legislature said on Monday that they would not try to draft a new plan ahead of a special session next week, but instead were waiting for DeSantis, a likely 2024 presidential candidate, to submit his own plan.

“The Florida legislature is caving to the intimidation of DeSantis and his desire to create additional Republican seats in Congress by eliminating minority-access districts,” Lawson said in a statement. “Again, I am not surprised, but disappointed with the legislature’s inability to fulfill their constitutional duties as elected officials without political interference from DeSantis.”

Mac Stipanovich, a longtime Republican strategist in Florida who has since left the party, told the Washington Post that Republicans were “prostrating themselves” for the governor.

“It’s just all about maintaining and acquiring power and holding on to office,” he told the Post. “What we’re witnessing is a mile marker on the road to one-man rule in Florida, at least for the time being.”

The Florida legislature passed two versions of the 5th congressional district earlier this year to try to satisfy the governor, but DeSantis rejected both. His office argued that lawmakers had unlawfully sorted voters based on race. One version also lowered the share of the Black voting population, and DeSantis’s office said they violated a provision of the state constitution that says the state cannot make it harder for minority voters who meet certain criteria to elect the candidate of their choice.

On the federal level, however, DeSantis’s rationale echoes what the US supreme court has signaled about the Voting Rights Act recently. The court’s conservative justices have repeatedly voiced skepticism about the use of race in redistricting and are making it harder for litigants to show it is necessary to consider race when drawing district lines.

DeSantis, a former congressman, is eager for a court fight over Florida’s maps, NBC News reported. He also is taking aim at a 2010 amendment to the Florida constitution, overwhelmingly approved by voters, that sets guardrails on the redistricting process. Part of that amendment says districts cannot be drawn to abridge “the equal opportunity of racial or language minorities to participate in the political process or to diminish their ability to elect representatives of their choice”.

“I think our dispute very well may lead to saying that Florida’s redistricting amendments are not consistent with the 14th amendment’s equal protection clause,” DeSantis said in March. Republicans hold a 6-1 majority on the Florida supreme court.

The legislature is set to convene from 19 to 21 April for a special session on redistricting.

Florida, Missouri and New Hampshire are the last three states completing congressional districting. So far, there are 181 Democratic-leaning seats, 182 Republican-leaning seats, and 34 highly competitive seats among the 435 seats in the US House, according to FiveThirtyEight.