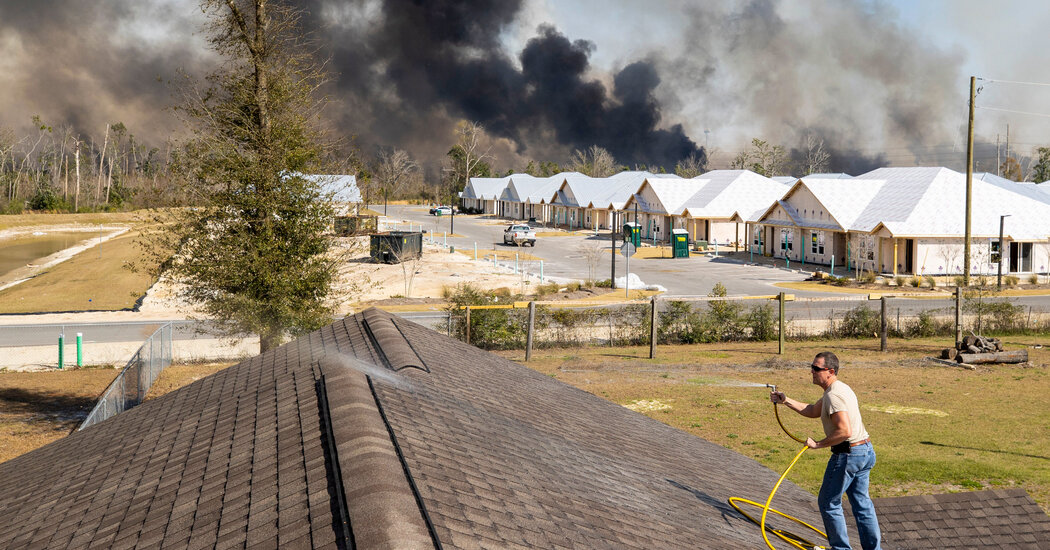 Over 600 homes have been evacuated in Bay County on the Florida Panhandle as a fast-moving wildfire that has been burning since Friday afternoon continued to resist containment efforts.

By Saturday afternoon, 24 hours after the Adkins Avenue fire began near Panama City, Fla., it had burned more than 1,400 acres and was 30 percent contained, the Florida Forest Service said on Twitter.

More evacuation orders have been put in place since Friday. In a statement on Saturday morning, the Bay County Sheriff’s Office said on Facebook that residents of the neighboring Bylsma Manor Estates needed to “gather your personal items and leave.”

The fire was caused by someone burning debris in a backyard, Valerie Sale, a spokeswoman for Bay County, said on Saturday.

Bay County issued an evacuation order on Friday that is still in effect. A burn ban was also issued in the area and in neighboring counties, Ms. Sale said. Gov. Ron DeSantis issued an executive order declaring a state of emergency in Bay County on Friday evening.

At least two homes have been fully destroyed and as many as 12 have been damaged, Ms. Sale estimated. She said that number is likely to go up.

There have been no reported injuries or fatalities, she said. An emergency shelter for evacuees has been set up at Hiland Park Baptist Church in Panama City.

The Bay County Office of Emergency Management got a call at 1:59 p.m. on Friday that a fire was growing out of control. For over a day, multiple county departments have been involved in efforts to contain the flames, Ms. Sale said.

According to a post on the Bay County Emergency Services’ Facebook page, more than 200 firefighters from Bay County and throughout the Panhandle “are on the ground working on establishing containment lines and protecting structures.” The Florida Forest Service has 70 firefighters operating bulldozers, tractors, engines and other heavy equipment on the ground.

There is no estimate as to when the fire will be fully contained since conditions in the area have made it hard to control the flames, Ms. Sale said.

“The problem that we’re dealing with is that it is very, very dry and very windy and the humidity is very low,” Ms. Sale explained. Bay County also has debris left over from Hurricane Michael in 2018, she said.

“We have thousands of acres of trees that have been dead and drying out since then,” creating problematic conditions that are conducive to a fire, she added.

The National Weather Service in Tallahassee said there would most likely be decreased visibility because of fog and smoke from the fire and warned that the dry conditions had caused “an uptick” in wildfires in the state.

On Saturday afternoon, hours after the Florida Forest Service warned that “fire danger levels are elevated statewide,” the agency issued an update on Twitter saying there were 148 active wildfires burning 7,100 acres across the state.